French soldiers under General Gouraud, with machine guns amongst the ruins of a cathedral near the Marne, 1918 via flickr

In honor of his 137th birthday, here are two letters that Barthas wrote in 1916 to Pierre Brizon, a Socialist member of the French legislature. One asks for the deputy’s help in providing for a young recruit on the front lines. The other thanks Brizon for sending pacifist brochures for the soldiers to read in the trenches—evidence of antiwar sentiment that would burst into open mutiny in 1917.

Louis Barthas letters to Pierre Brizon (1878–1923), French legislator from the Auvergne region, known for his outspoken antiwar and pacifist sentiments. In 1916 he was temporarily suspended from the Chamber of Deputies.

I’m no doubt taking up too much of your busy time, but with five days of reserve duty, how else am I to while away a few hours, stretched out like cattle beside a watering hole?

Here’s the reason for these few lines.  Despite the 296th’s being a reserve regiment [composed of soldiers who had done their military service years before], after our front-line duty at the Verdun killing fields, the replacements we’ve been given have transformed our squad into one made up of young kids from the [conscript] classes of 1916, 1917, and even 1918, most of them orphans who have advanced their conscriptions due to the false lure of glory, sleeve-stripes, medals, etc.  At the age of 38, I’m a father figure to them, and you can guess what principles I’m instilling in them.  How keenly they listen to me, how well they understand what I’m telling them! Oh, if they could only undo their enlistments! I also take care of them: writing pleas to their local governments and charities.  Now there is just one left, class of 1917, Victor Grandjean, a little Parisian who never leaves my side.  He’s orphaned, absolutely alone in the world.   I asked for a little support for him from the prefecture of the Seine [département]. Response:  the Seine and the City of Paris only send clothing and blankets to officers to distribute to the needy.  The Bureau des Renseignements et oeuvres de guerre, the École supérieure de Guerre to whom I had also written:  no response.

So if, Citizen Brizon, in your entourage, or if you know a generous person or a charity likely to care about the fate of this little abandoned one, please let me know.  That would be a worthy act of Socialist seed-planting, since death could strike me down at any instant.  I’ve been face-to-face with it for twenty months.

I thank you for the two brochures that you have gotten to me. They circulate from hand to hand, and the effect they produce is enormous.  Sometimes, at the intersection of two trenches, a comrade will be reading one aloud while two sentinels keep a lookout for one of our “bulldog” bosses.

How those words go right to the hearts of these men who are hearing, for the first time in two years, words of peace, hope, faith, and protest against the greatest crime  ever committed against humanity.

If it’s possible, please send larger numbers of these brochures.  We Socialist militants, or those who will become ones, are quite numerous here.  In a few hours we can get the word to the whole regiment and even neighboring regiments, too, unless you see a danger for yourself and for us from this propaganda in the army.

At the same time as this letter, or tomorrow, I will send you, without my signature, some details [five words redacted, probably by censors] that will no doubt interest you.

Please accept, dear Citizen Brizon, my most fraternal sentiments of sympathy, and those of all my comrades.

Louis Barthas (1879–1952) was a cooper in a small town in southern France. Edward M. Strauss is a fundraising director in higher education and former publisher of MHQ: The Quarterly Journal of Military History and translated Poilu: The World War I Notebooks of Corporal Louis Barthas, Barrelmaker 1914-1918 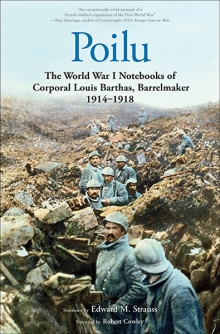