Jacques the Jacobin did not actually exist. His was a fictional account published in the most widely read of the multitude of new French newspapers, Les Révolutions de Paris (Revolutions of Paris) to draw the uninitiated into the realm of politics. If pamphlets opened revolutionary discussions, newspapers amplified the political debate, often escalating the incendiary rhetoric of the clubs. Political news was in such demand that clubs with newspaper subscriptions often regulated the time a reader could monopolize a newspaper before passing it along to waiting readers. Some clubs even chained particularly popular papers to tables and stamped them with special seals so that they could not be removed. Other clubs solved the problem of high demand by reading papers aloud to the assembled multitude. Two centuries after the invention of the printing press, newspapers overtook pamphlets as the mouthpiece of political dissent.

The Genevan philosopher Jean-Jacques Rousseau had observed in 1762 that “the better constituted the state, the more public affairs dominate private ones in the minds of the citizens,” because “in a well-run polity, everyone flies to assemblies.” A German professor noted the omnipresence of politics: “Everyone is eager for the most recent news of world events, from the Regent, who receives it at first hand from his envoys and messengers, down to the countryman, who hears … the newspapers read by his political schoolmates every Sunday in the pub.” Clubs, from the Paris Jacobins meeting across the street from Jacques’s stall to the London Corresponding Society assembled at Bell Tavern on Fleet Street to the Warsaw Citizens offering Aid gathered in the empty Radziwell Palace, took it as their responsibility to inform or, in their words, to enlighten citizens. They constituted an alternative political sphere.

Before the revolutions, individual wealthy readers typically perused their newspaper alone in the comfort of their home, although some read papers in reading clubs that admitted the elite. European politics had generally been the business of the expensive international gazettes because they were not subject to national censorship. A typical issue of the Courrier de l’Europe (Courier of Europe), published in London, featured bylines from Saint Petersburg, Stockholm, Vienna, Madrid, Maastricht, Liège, Brussels, and Paris. Like most eighteenth-century newspapers, it regularly republished translated articles from other journals without attribution.

With the revolutions, circulation exploded. One-third of Londoners read a weekly newspaper at the time of the American Revolution. “These days political newspapers outsell others by a ratio of ten to one,” the duc de Choiseul reported from Paris in 1789. John Adams boasted to friends in Congress of his “secret connections” with Dutch journalists who promoted the American cause of liberty to an enlarging reading public throughout Europe. “The Gazettiers in this Country are not mere Printers,” Adams told his compatriots, alluding to the old perception of the colonial printer in America as “a mere mechanic in the art of setting and blocking types,” without a mind of his own. That image evaporated with the American Revolution. The Dutch editors, Adams asserted, “are men of Letters and as these Vehicles have a vast Influence in forming the public opinion.” Most notably, Antoine Cérisier, the French-born Dutchman, wielded a pen that had “erected a monument to the American cause more glorious and more durable than brass or marble.” Cérisier’s articles in Le Politique hollandois (Dutch politics) “were read like oracles and his sentiments weekly echoed and reechoed in gazettes and pamphlets” from The Hague to Milan, Adams told Congress. Stories of American victories in their War for Independence, recounted in the Gazette de Leyde (Leiden gazette), were read by the Polish king’s advisers in Warsaw.

From Revolutions without Borders: The Call to Liberty in the Atlantic World by Janet Polasky, published by Yale University Press in 2016. Reproduced by permission. 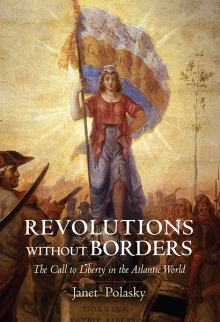