Stromatolites in Australia by Jon Willis

“So you want to fly to an iron ore mining town in the NW of Australia, drive 200 km into the desert to the Outback’s hottest town, then follow a 4WD track to a rock outcrop in the middle of nowhere, all to look at some wavy lines in rocks?”

Wives do have a habit of hitting the nail on the head.

How did I come to visit Australia? As a professional astronomer I had the good fortune to be invited to visit ICRAR (International Center for Radio Astronomy Research) at UWA (University of Western Australia) in Perth in May 2016—aided by the generous support of CAASTRO (The Australian Research Council Center of Excellence for All-Sky Astrophysics).

One of the benefits of my day job as an astronomer (or should that be my night job?) is that it actively encourages my passion for astrobiology. Astrobiology is the branch of science that aims to discover how life emerged in the Universe—both on Earth and possibly beyond it. It continues to take me to some wonderful places on planet Earth, including rock outcrops in the Australian desert.

In my defense though, the rocks in question host evidence of some of the earliest life on Earth: fossil traces of stromatolites. The term stromatolite, when used to describe a fossil, refers to delicate layers of wavy lines in sandstone rocks that are claimed to be the remains of mat-like colonies of bacteria. The stromatolite fossils of NW Australia are some of the best preserved and oldest on Earth, stretching back 3.4 billion years into Earth’s history. Getting to them is half the fun.

If I thought the 5:30 a.m. flight from Perth to Port Hedland would be pretty quiet, then the line of cars snaking out of the airport drop-off zone was a sharp rebuke to my Pommie complacency. The airport was packed with mine workers heading up for a two week shift, processing iron ore from the desert mines to the vast shipping port. Hertz at Port Hedland offers two types of car: hulking SUVs with a strong mix of armored personnel carrier in their automotive genes, and utes rigged for mine operations. To appreciate how I felt getting the former out of the Hertz car park, you should know that at home I drive a plucky Suzuki Aerio that can out turn a Mini. In comparison I now felt like a tank commander. Now to run through my desert driving checklist: plenty of water—check. Personal locator beacon—check. GPS—check. “In 200 km, turn right…”

Months earlier, when planning this trip from my home base of Victoria, BC, I made a critical discovery: someone even more passionate about stromatolites than me had written a guidebook. Martin Van Kranendonk and Jean Johnston’s  Discovery Trails to Early Earth—A Traveller’s Guide to the East Pilbara of Western Australia, had everything I needed for a driving tour through the Pilbara: the science, the maps, the photos and GPS coordinates good to within 2 meters. Each stop on my driving route to Marble Bar would be marked with a GPS way-point.

I had set my GPS alarm to go off within 200 meters of each point of interest, be it a rock feature close to the road or a vista over the ancient geological landscape. However, I quickly realized that, driving at 120 kilometers per hour, I was covering 200 meters every six seconds and every alarm demanded a rapid slamming of brakes. Each highlight en route—dolerite dike, inverted bed, granitic inclusion or pyroclastic rock—was testament to the Pilbara’s ancient geological past. I was quickly becoming a minor expert (or major bore) regarding the geological history of this stark and austere region of Australia.

If you didn’t know that Marble Bar is Australia’s hottest town, the giant, cast iron sculpture announcing the fact on the edge of town would soon put you straight. The Ironclad Hotel that forms the center of town life is rightly celebrated as an oasis in the desert: When I arrived the barman was feeding two adopted baby joeys and my VB was served in the can with a cooler sleeve. The real “Bar” in Marble Bar is a great vein of jasper that cuts across (and therefore bars) the Coongan river on the edge of town. Up close, it is a tilted layer cake of reds, pinks, blues and grays. Each layer was deposited by hot, mineral-rich water that penetrated and then cooled in the existing limestone rock. The sunset colors only added to the sense of richness and warmth. The air itself was hot—still 35 degrees Celsius at the end of a late winter day. In summer it would be 45 to 50 (and I would be in a body bag).

The following day continued my journey to the dawn of life on Earth. Sixty kilometers south of Marble Bar my GPS chirped into life and I hit the brakes once again. Martin’s guide book told me to look for a small rock cairn marking a lightly overgrown 4WD track. Before me stretched an unbroken view of spinifex and small trees (for the uninitiated, spinifex is a species of grass richly endowed with sharp, perforating spines; my relationship with this prickly plant was only just beginning). I checked the guidebook again—it was published in 2009—and I realized that I may have to recalibrate for a certain amount of growth over the last seven years. With less naive eyes, I did in the end discern a faint pair of linear features in the spinifex that might be termed “a track.” It was the best lead I had from a list of one and I timidly aimed my car off the road.

Fortune does indeed sometimes favor the mildly brave—though the only thing I was being brave with was the paint work on my rental car as I gently “eased” several small trees and shrubs out of the way (thank you Hertz for my APC). A faint jeep trail appeared, followed by the promised gully crossing. Things were definitely looking up and I celebrated by locating second gear. The trail finally petered out at a small patch of level ground that offered at least a small hope of turning the car through 180 degrees. I had reached the much vaunted “car park.”

On leaving the car I could finally appreciate my newfound isolation. The morning was hot and still. A close silence lay draped across the land and not a breath of wind disturbed the spinifex dotting the low hills and crags around me. I climbed the squat hill in front of me and approached the first in a series of innocuous, shattered rock outcrops. Atop the tilted band of limestone exposed in the first of these sat a fractured layer of sandstones and cherts. This was the ancient reef that I had come so far to see.

These rocks are 3.4 billion years old. The age of the reef formation is known with tight precision from radiometric dating of volcanic rock layers that sandwich the reef from above and below—squeezing it into a narrow slice of geological time. Heaving waves of geological forces have tilted the whole reef on its side to be revealed again in cross-section at the surface by the inexorable grind of erosion. The sandstone is composed of the accumulated sediments that gradually built up over the limestone. Look more closely and you will see delicate layers within the rock, each perhaps some few millimeters thick. It is the concentric waves and ripples within these rocks that mark out something different and truly remarkable—faint yet discernible traces of living structures.

Nature has many ways of laying down sedimentary rocks in wavy layers, sometimes even preserving ripples on a sandy river bed from some eon past. One should therefore be careful before gushing that some intricate pattern in a sample of rock points to early life. At this particular location however, erosion has given us a top-down view of these structures—which are revealed to be squat, conical mounds like so many upturned egg-cartons. It is within these layers of ancient sediment that modern microscopy has revealed cell-like structures of carbon and nitrogen atoms, ghostly evidence of single-celled bacteria that made up the mound-like colonies (the University of Western Australia leads the world in this branch of advanced microscopy and I was fortunate enough to later visit their lab—oh for a longer word limit!).

To stand before these ancient rock formations and the micro-fossils they contain is an extraordinary act of communion with our distant past. These are our ancestors—barely glimpsed in the depths of time yet linked to our own family tree by an unbroken chain of cell division and evolution.

As I looked at the fossils in front of me, I could feel the years slipping away from the landscape, all 3.4 billion of them, as my mind’s eye took in a view of a forgotten world at once alien and familiar. The scrubby desert in front of me was replaced by an ancient shoreline bordered by a limestone reef, the sharp spines of the spinifex replaced by the lapping waves of a shallow sea. It speaks of Australia’s great natural diversity that my imagination was aided by an earlier visit to see modern, living stromatolites on the shores of Shark Bay. Here, serried ranks of low, grey pillars, formed by successive generations of colonies of primitive bacteria, stretch out into the calm of a salt water lagoon. It is an eerie and deeply primordial view—one which my imagination had magically recreated before me now.

As I stepped forward, my GPS detected a final way-point and chirruped into life. “You have reached your destination.” Quite. The moment was gone.

An active researcher in the fields of cosmology and the evolution of galaxies, Jon Willis is associate professor of astronomy at the University of Victoria in British Columbia, where he teaches a popular course on astrobiology. He is the author of All These Worlds Are Yours: The Scientific Search for Alien Life 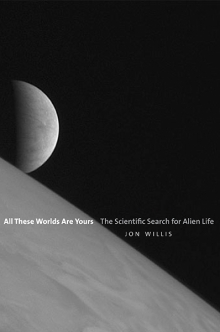