I was not yet ten when the first refugees from the country formerly known as East Pakistan began arriving in India. Our parents and our teachers told us how Pakistani military had declared martial law in East Pakistan, and thousands of troops had landed there. Many people had died and East Pakistani leaders including Mujibur Rahman, who had by then become a household name in India, had been arrested. We heard stories of brave guerrillas called the Mukti Bahini fighting the mighty Pakistani army. I remember photographs of refugees in Indian newspapers showing them in their helpless, fragile state. We collected clothes, funds, and food for the refugees. I remember staging a play with other children in our apartment complex and we collected a small, princely sum which we forwarded to Bangla Desh (sic) Aid Committee. During summer, Indian sitarist Ravi Shankar, former Beatle George Harrison, and many other performers staged the Concert for Bangladesh in the United States, raising money for the refugees. East Pakistan had declared independence and was fighting for its freedom; by December it would be free and become known as Bangladesh. India entered the war after Pakistani air force attacked Indian airfields in early December; Indian forces proved too powerful for the dispirited Pakistani troops, and within a fortnight, Pakistan surrendered. By March, most refugees had gone home. India’s then Prime Minister, Indira Gandhi, was celebrated throughout the country and in Bangladesh.

The war left a deep imprint on my mind—as I grew older, I wanted to learn more about that conflict. I was puzzled by the assassination of Mujibur Rahman and most of his family in 1975. I was astonished in 1986, when I went there the first time, to discover how easy it was to meet Colonel Farooq Rahman, one of the main conspirators of those assassinations, who had been a presidential candidate the previous month, and operated freely, protected by government guards, and giving me a candid, chilling interview, in which he showed no repentance. He was the colonel who would not repent; nearly three decades later he would give me the title of my book.

Mujibur Rahman was killed for a complex set of reasons. Some Bangla nationalists thought he was getting too close to India. Some believe great powers worldwide didn’t want him to succeed. Some resented his preference for secularism. There had been mass starvation due to a famine in 1974 and lawlessness had increased. Mujibur Rahman had made Bangladesh a de facto one party state and banned most newspapers. Mujibur Rahman’s party, Awami League, represented Bengali nationalism.

When Bangladesh was East Pakistan, it was part of the Indian subcontinent carved out at independence from Britain in 1947 to give the subcontinent’s Muslims a home of their own. East Pakistanis were Muslims, indeed, but they were also Bengali. West Pakistani rulers—both generals and politicians—couldn’t understand that. Economists and politicians in the East said that the West was treating the East as a colony and their cultural identity was being suppressed. In the elections held in 1970, the Awami League won 160 of the 300 seats nationwide—all its seats were won in the East, where it won all but two seats. No party in the West came anywhere near Awami League’s strength. Mujibur Rahman should have been invited to form the government. Instead, Pakistan sent troops.

Bangladeshis believe three million people were killed in what they call genocide. Pakistan says no more than 26,000 civilians died. The truth, as always, is in between; contemporary estimates—not necessarily reliable—suggest the number of deaths to be between 200,000 to possibly a half million. Another figure—also unverifiable, but disputed less vociferously, is of the number of instances of rape that occurred—between a quarter million to 400,000 such instances. Being a conservative society, there aren’t many women who have come forward to tell their stories, but in the course of my research I met and interviewed twenty-eight of them. Whether it was genocide or not is for lawyers to quibble over; from the testimonies I heard, it was clear that crimes against humanity had occurred, and the Pakistanis responsible for it had returned to Pakistan, where the Pakistani army did not prosecute them, and many former East Pakistanis who had opposed the creation of Bangladesh had remained in Bangladesh. Not only did they survive, they could thrive because after Mujibur Rahman’s assassination, the governments that followed had simply no interest in pursuing those cases. Indeed, for a while, politicians of the Jamaat-i-Islami, many of whom had opposed Bangladesh’s creation, were part of Bangladesh’s government.

In 1986, Farooq Rahman enjoyed immunity and could act with impunity, even run for President. But his luck ran out in 2010, when he was executed after Mujibur Rahman’s daughter, Sheikh Hasina Wajed became Prime Minister, and she reopened old cases against him and other conspirators.

After 1986, my reporting years took me to different parts of the world—firstly, Southeast Asia, where I would learn more about the Indonesian massacres of 1960s, the Pol Pot years in Cambodia, and later as a reporter in South Africa, I saw the beginning of the Truth and Reconciliation Commission. Many years later, for some time I was researcher at Amnesty International in London, and went to the killing fields of Bosnia-Herzgovina, and my work also took me to Arusha in Tanzania, where a tribunal was prosecuting the war crimes in Rwanda. My interests coalesced—the vivid memories of a conflict I understood, my commitment to human rights and interest in transitional justice, and my passion for Bengali language and culture.

I was born in a Gujarati family in Bombay, where my mother read the novels of Saratchandra Chattopadhyay and my father went to weekend classes to learn the music of Rabindranath Tagore. I loved the language even if I didn’t understand it as a schoolboy. During my late teens, I discovered the cinema of Satyajit Ray, and wanted to learn Bengali so that I wouldn’t need to see sub-titles while seeing his cinema, as well as the films of Ritwik Ghatak and Mrinal Sen. The school I went to was inspired by Tagore’s ideals, and music and art formed a major part of our curriculum, as Tagore had envisioned. That love for Bengali, the commitment to human rights and justice, and the recollections of a war experienced as a child, took me to Bangladesh in 2011.

I made several extended trips, going to all parts of the country. I learned about the exceptional humanity of people towards one another, of how a Muslim man who had seen his father killed had saved a Hindu infant and gave her to a Hindu family to bring her up, and how they had remained in touch. I learned about compassion from a woman who heard gunfire as her father was shot, and who wanted only one thing from Pakistan—remorse and apology. I heard about old wounds that had remained sore and open. I listened to old men in a hut without lights near the Bay of Bengal, telling me that nobody had come to ask them about their stories. I was in the large ground where thousands gathered demanding death penalty for Jamaat leaders who had been found guilty by the controversial international crimes tribunals that Bangladesh had set up. After I wrote my book, I discovered, to my horror, how rationalist, atheist, and free-thinking Bangla nationalist bloggers who sought justice (including the death penalty) were being singled out and hacked to death by Islamic extremists. Instead of aggressively pursuing the killers, the government was annoyed with the bloggers for offending religious sensibilities.

Two days before the war ended, East Pakistani collaborators took Pakistani troops to the homes of dozens of intellectuals who would have formed the backbone of the new nation, and brought them to a place called Rayer Bazar where they were murdered. The cover image of the book shows the decapitated head of one of the victims. A monument stands there today, with a poem inscribed, which says:

(Does Bangladesh speak what you wanted to say?)

The answer, as the terrorist attacks on July 1, show, remains elusive; this beautiful land that has inspired some of the world’s finest poetry and music remains wounded, as it tries to embrace both its identities, Bengali and Muslim. A poem by the Bangladeshi-American poet, Tarfia Faizullah, who has written about those rapes, captures that central dilemma:

Muslim or Bengali, they

Rocks were broken along

My spine, my hair a black

Fist in their hands, pulled

Down into the river again

Salil Tripathi has been a foreign correspondent in Singapore and is a contributing editor to Mint and Caravan, both published in India. Salil works at a human rights organization in London and chairs PEN International’s Writers in Prison Committee. He has been a visiting fellow for business and human rights at Harvard’s Kennedy School of Government. He is the author of The Colonel Who Would Not Repent: The Bangladesh War and Its Unquiet Legacy. 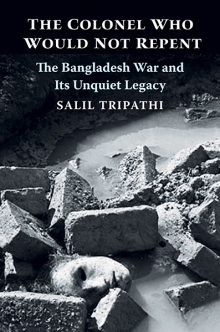