Kennedy was the first president not just of the age of national media but of the age of national corporate business and national popular culture, whose centers were in Manhattan, Chicago, and Los Angeles, precisely the locations of Father Kennedy’s principal operations. Kennedy’s family business was centered in an office, run by his brother-in-law Steve Smith after Joe Kennedy’s retirement, in the Pan Am building, looking up Park Avenue from its perch above Grand Central Terminal. That was where the checks were written for private luxury and political expenditures, though all members of the Kennedy family were famous for their reluctance to use their own money in political campaigns. Another brother-in-law, Sargent Shriver, presided over the Merchandise Mart across the Chicago River from the Loop, at the time said to be the largest commercial building in America. Joe Kennedy had retired from movie production, but a third brother-in-law, Peter Lawford, was a charter member of the group of hard-living actors who called themselves the Rat Pack, led by Frank Sinatra himself. Through this connection, Kennedy had access not only to the favors of pretty ladies but to all the arcana of Hollywood. He grew up, in short, at an apex of the new national structure of power and cultural influence.

He was also the beneficiary of a short-lived consequence of the postwar prosperity: the apparent, albeit temporary, disappearance of social and economic class as an acknowledged concern of national politics. To be sure, since the days of the young Republic, from George Washington to the two Roosevelts, rich men had always entered politics and often thrived. But the issue of economic equality was always present. Briefly, between 1945 and the 1970s, that issue was less contentious because it was generally believed, both on the right and on the left—or at least by Democratic politicians who relied on the support of organized labor as well as by Republican politicians who represented the interests of corporate business—that economic inequality would gradually disappear, that out of the horn of plenty, economic rivalries could be bought off. “On the reefs of roast beef and apple pie,” the German sociologist Werner Sombart memorably wrote, “socialistic utopias of every sort are sent to their doom.”

One by-product, or at least concomitant of this fading of class conflict from national politics was the decline of party. Jack Kennedy, promoted by his father and with his father’s wealth in the background, was perhaps the first president who was not so much chosen by one of the two national parties as the beneficiary of a successful raid on the party’s leadership.

The Kennedys fulfilled in many particulars Max Weber’s portrait of the charismatic leader. This, Weber was at pains to explain, could be an inspired political or religious leader, or the leader of a band of robbers. In any case, his leader must possess charisma, or personal grace and charm. But this quality is morally neutral: he, or perhaps she, can be anyone from Ned Kelly or Spartacus to Mahomet or Jesus Christ. The charismatic leader does not, however, attract his followers, whom Weber called the “charismatic horde,” by mere personal qualities. He must offer reward to his followers, in this world or the next.

In Massachusetts and later all across the United States, the Kennedys were able to pull off an impressive political trick: to present themselves as the friend of the working man while at the same time impressing everyone with their wealth and their access to worlds of privilege to which most citizens could never aspire. In retrospect, we can see that they were the beneficiaries of a relatively brief moment when many Americans persuaded themselves that there was no such thing as social class in America. In the late nineteenth century, American literature and journalism were full of the contrast between barefoot poverty and silk-stocking wealth. In the Depression, no one hesitated to speak or write about the “working class.” After the age of Kennedy and Johnson, class discourse would return. But for a brief interval, starting with the high wages of war industry and the Detroit contracts of the early 1950s, liberal intellectuals went to rather extraordinary lengths to persuade Americans that there was no such thing as class consciousness in America.

From JFK and LBJ: The Last Two Great Presidents by Godfrey Hodgson, published by Yale University Press in 2016. Reproduced by permission.

Godfrey Hodgson was a White House correspondent during the Kennedy and Johnson years. He taught at Oxford University. 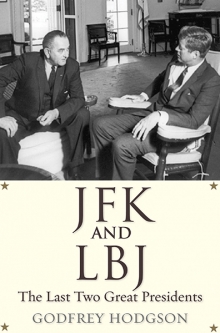