Detail of a miniature of a battle with John, king of England, and Louis VIII on the march by author unknown via The British Library

Have you ever heard of Magna Carta? It’s likely that you have: the document is famous throughout much of the world and has come to represent enduring freedom and liberty. It exercised a strong influence on the US constitution; sixteen states incorporated the full text into their statute books and twenty-five more included a version of the most famous clause, rendered as “No person shall be deprived of life, liberty, or property, without due process of law.”

However, what you might not know is that shortly after its creation and circulation, Magna Carta was in danger of being rescinded, and if it hadn’t been for the actions of one person, this great symbol of freedom from oppression would have faded into obscurity. So let’s hear it for the man who nearly succeeded in becoming King Louis I of England.

King John saw Magna Carta as a temporary measure: something to which he needed to agree in order to get the barons off his back while he regrouped. No sooner had he assented to it than he reneged on his word, dispatching envoys to the pope to ask him to annul the document and sending his  forces to attack and burn the lands of the signatories. The barons came to a momentous decision: if they couldn’t control John, they would need to overthrow him. But they were no republicans—England had to have a king. Who should it be?

Louis was the eldest son of the reigning French king Philip Augustus; he was also a direct descendant of William the Conqueror and married to John’s niece, both of which gave him a passable blood claim to the English throne. But more than this, he had the resources to mount a campaign, the men to run it and the skills to win it. He was renowned as a brilliant warrior and was known to be honest, just, moral, and a man of his word—all the things that John wasn’t. A delegation of barons traveled to Paris to offer him the throne, and he accepted. Louis built and equipped a fleet, sailed from France, and arrived on English shores on 21 May 1216.

Louis was determined to make himself king, and initially he was very successful: about half the barons came over to him straight away, and castles and towns surrendered to him without resistance. John fled to the west of England rather than fight him. Louis marched in triumph to London where he was welcomed and proclaimed king; within months he had about two thirds of the nobility and more than half of the country under his control.

But then in October 1216 John did the one and only thing which could conceivably have helped his cause: he died. Far from being Louis’s moment of triumph, as might perhaps be expected, this was the worst thing which could have happened. John had left five children, two of them sons including the eldest, Henry, who was nine years old; the remaining royalists hastily declared him Henry III. Louis swiftly found himself being recast in popular opinion—no longer was he the conquering hero here to save the barons from the cruel John, but a foreign bully attacking a little boy. But still many of the barons remained loyal to him, so the regency council needed to act decisively. In November 1216 they did something surprising: they re-issued Magna Carta.

Let us not underestimate what an astonishing U-turn this was. It was only a year since King John had gone to war to prevent the charter being implemented; that the regent now felt that his only chance of having John succeeded by King Henry, rather than King Louis, was to take this step demonstrates the strength of Louis’s position.

The re-issuing of the charter did the trick. The barons, having loudly declared that they were at war with John not because they were traitors to the crown, wanting to abolish monarchy, but rather because they were patriots who wanted only to subject monarchy to the control of law, had the rug pulled out from under their feet. And—just as an aside, naturally—Louis, man of principle as he was, was turning out to be less controllable than they’d hoped. Perhaps a boy king, subject to their conditions as expressed in Magna Carta, would be more amenable?

Louis wasn’t one to give up easily, and he held out for quite some time after the desertions began. But his forces dwindled and he needed to fight on too many fronts. In May 1217 he had to split his army in half in order to fight both at Dover and further north, but this did not leave him with enough men to function properly in either area: he failed to take Dover castle, and his northern forces were soundly defeated at Lincoln. Reinforcements organized by his wife were intercepted by an English fleet, defeated in a naval battle in the Channel, and never reached him. Louis bowed to the inevitable, sealed a treaty in September, and withdrew.

Louis’s seventeen-month interregnum has often been overlooked in the history books. But it was a pivotal period in English history: without him and his intervention Magna Carta would have been rescinded, ignored, relegated to a footnote in history. Louis remains to this day the least known of those to have ruled over England, but his legacy—both there and in other parts of the world—should not be forgotten.

Dr. Catherine Hanley is a writer and researcher specializing in the High Middle Ages, and the author of War and Combat, 1150-1270: The Evidence from Old French Literature (2003) and Louis: The French Prince Who Invaded England. 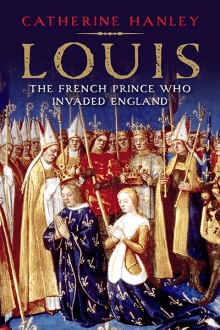