I’ve often wondered how it is that, with all the emphasis by prophets and sages and the great men of the world on the need for education of women, when our women have so often assembled and, humbly but insistently, petitioned the Majlis and the cabinet to set up a modern school for the education of women, the deputies and the government ministers have each time not merely refused to comply but actively fought against it!

I thought a great deal about this, wandered mountains and valleys, and came to the conclusion that it was all because the women of Iran—that is, our mothers—have complete trust in their seasoned earthenware cooking pots. Now, please don’t laugh at me when I say this, and don’t think I’m joking or baiting you. At this advanced stage of life, joking and leg-pulling doesn’t befit me, nor my neatly trimmed [henna-dyed] red beard. I tell you in all seriousness that if all the scientifically minded ladies and all the progressive gentlemen in Iran reeled off one thousand reasons for the ministers’ and deputies’ opposition to a school and a society for women, I for one am convinced that the core reason is that same complete trust which our mothers place in their seasoned earthenware cooking pots.

I have never been ashamed to express this opinion about our own womenfolk before my fellow citizens. I’ve said it straight out, like it is, and I hope they too will stand up, put all hesitancy aside, and admit, man to man, that our mothers will not swap one old earthenware cooking pot for ten brand-new, unblemished ones. Why do I need them to confess to this fact? Because even if our own compatriots realize that Dakhow is telling the truth, still the foreigners will say that I’m joking. And as I’ve already said, joking at my age and with my neatly trimmed red beard does not befit me.

As I have already said, the opinions, ethics, and habits of mothers form the basis of all the opinions, ethics, and habits of their sons throughout their lives. One such opinion—this same faith our mothers have in their seasoned earthenware cooking pots—is the reason why we all, without exception, have complete faith in men who “have backbone.” Now, it goes without saying that all men have bones; what I mean by this expression is people like those seasoned earthenware pots.

Our deputies and ministers are well aware that if the women of Iran do join forces to open schools, have associations, and be educated, they will gradually realize that clean, hygienic cooking pots are better than pots with a layer of soot two fingers thick on the outside and thirty-five-year-old inches-thick grease on the inside, and undoubtedly once this idea they inherited from their mothers has been expunged, their sons for their part will no longer pin their faith on “solid citizens,” and like Mr. . . . Taqizādeh will put their collective foot down and demand, How much longer must our ministers and statesmen and government officials be chosen from among a small, select coterie? If the composition of the cabinet changes a thousand times, how long must Moshir al-Saltaneh’s belly, or Nezām al-Saltaneh’s doleful voice, or Āsaf al-Dowleh’s fur-sleeved topcoat still be the ornament of that body? And of course you know that in the words of that consummate stylist and accomplished scholar the future minister of censorship of Iran Hajji Sadr al-Saltaneh, “This skein has a long, long thread.” Meaning that tomorrow, once this idea has won general acceptance, during the second round of parliamentary elections it will be the deputies’ turn.

Now I tell you frankly, and call to witness the consciences of all the ministers and deputies and officials, that the source of the country’s ruin and of the population’s misfortune is that same complete trust our women have in their seasoned earthenware cooking pots, and undoubtedly on whatever day this conviction is removed from us, Iran will be in a state of heavenly bliss. So if the ladies and gentlemen of our country really desire reform, then as soon as possible this is what they must do. First, the gentlemen should gather up all the beards, full-girth fur-sleeved robes, buckled shoes, and all suchlike emblems and badges of the long-toothed men, load them on to a donkey, and send them out of town. Then the ladies should gather up every old earthenware pot in their kitchens, bring them out, and smash them behind that departing guest.

If they do this, I will promise you faithfully that within a short time everything that is wrong will be righted. And if, God forbid, they ignore my advice and the moral of all my parables just goes in one ear and out the other, then I have no solution. Let them recite the whole ofa-man yujīb, and maybe God will make a start on reforming things.

This is the end. Yours truly,

Ali-Akbar Dehkhoda (1879–1956) was a prominent linguist whose greatest achievement was an authoritative Persian dictionary. 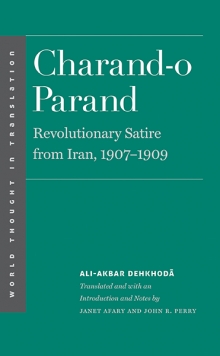