In 2013 an article in the Washington Post featured Jason Trigg, an MIT computer science graduate working in finance and giving half of his salary to the Against Malaria Foundation. Trigg was described as part of “an emerging class of young professionals in America and Britain” for whom “making gobs of money is the surest way to save the world.” In the New York Times the columnist David Brooks wrote that Trigg seemed to be “an earnest, morally serious young man” who might well save many lives. Nevertheless, Brooks urged caution. He warned, first, that our daily activities change us, and by working in a hedge fund your ideals could slip so that you become less committed to giving. Second, he thought that choosing a profession that does not arouse your passion for the sake of an “abstract, faraway good” might leave you loving humanity in general but not the particular humans around you. Third, and most important, Brooks worried about “turning yourself into a means rather than an end … a machine for the redistribution of wealth.” Taking a job just to make money could be “corrosive,” Brooks wrote, even if you use the money for charity.

The first two objections make factual psychological claims that can be checked against people who are earning to give. The third objection is moral, rather than psychological, so I will postpone discussion of it until we come to ethical objections in the next section.

In 2013 Matt Wage spoke to the Princeton class he had taken four years earlier. He told the students that when he went to work in finance some people raised concerns about his unusual choice. One worry was that an idealistic young person surrounded by cutthroat bankers wouldn’t be able to handle the pressure and would quit. That hadn’t happened. Matt doesn’t regard the people he works with as cutthroats, and he finds the work itself interesting. The other major concern was one that Brooks mentions, which Matt put as follows: “By being around a lot of wealthy people who drive Ferraris, I would soon say, never mind about the charities, what I really want is a Ferrari.” A Ferrari is still not on Matt’s shopping list. His strategy for trying to prevent it ever getting there is to be very public about his pledge to donate 50 percent of his income. He has told all his friends that if he doesn’t keep his pledge, they should ridicule him. (He has also given permission for his pledge to be mentioned in this book, making it even more public.) Overall, though, Matt gave no signs of being under any unusual psychological burden caused by earning to give. “I’m extremely happy with my life,” he told me. “I’d still do this altruistic stuff even if I thought it was making my life worse, but, by a strange coincidence about how human minds work, I think it’s actually making me happier.”

Jim Greenbaum found his initial years frustrating, but only because it was taking him longer than he expected to create the wealth he needed to help others. It did not make him less committed to his ultimate goal. He enjoyed business, which in some ways seemed to him like a game. He also valued the people with whom he worked. He advocates balance between a comfortable life and doing good. Jim has already given away so much that his decision to earn money in order to give it away has obviously worked out very well.

From The Most Good You Can Do: How Effective Altruism Is Changing Ideas About Living Ethically by Peter Singer, published by Yale University Press in 2016. Reproduced by permission.

Peter Singer is Ira W. DeCamp Professor of Bioethics, Princeton University, and Laureate Professor, School of Historical and Philosophical Studies, University of Melbourne. He is the author of more than twenty books including Animal Liberation, Practical Ethics, and The Life You Can Save. 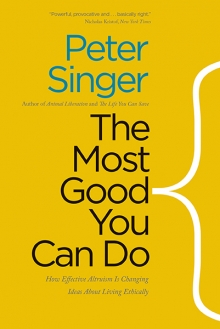