The second half of the nineteenth century witnessed one of the many episodes of globalization. This one was built on the industrial and financial revolutions. The new inventions in transport and communications – railroads, steamships and the introduction of the telegraph – had connected the many parts of the world. International trade had knitted together the world economy, spanning the Americas to the Antipodes and all continents in between. Workers migrated from Europe to North and South America, from India to Africa and the Caribbean, from China to America and other parts of Asia and Africa. The years 1873 to 1896 are labeled the Great Depression as prices of agricultural products fell steadily. (Modern economic historians are skeptical about the label.) Economic growth was steady, however, across Europe and the US. Thanks to the falling prices of food items, the workers’ living standards improved even as unemployment fell and rose in cycles. The financial revolution enabled cities in South America to raise capital for building railways and tramways on the London stock market. But there were victims too. Baring Brothers narrowly avoided collapse, saved only by the speed with which the Bank of England reacted. The US attracted a lot of European capital as it expanded westward after the Civil War and also received a large influx of workers from Europe.

The ideas of Marx were gaining support in the workers’ movements, if not in the halls of academia. The First Socialist International had been founded by Marx in 1864 but it lasted only until 1871. In 1889 the Second International was founded, and despite many breakaways the Socialist International is still around. Socialist movements in Germany and France adhered to Marx’s ideas about the problems of capitalism. A determined answer to Marx’s theory of profits as surplus value was given by the Austrian economist Eugene von Böhm-Bawerk, who pointed out some logical inconsistencies in the argument. But the only economist to take up Marx’s challenge of explaining the dynamics of capitalism was another Austrian, a student of Böhm-Bawerk.

Joseph Schumpeter (1883–1950) studied economics in Vienna but his ambition was to be the best horseman, the best lover, as well as the best economist of his generation. He claimed to have achieved two out of the three ambitions, though we don’t know which they were. Rather like Ricardo, he was a busy man of affairs as he became Finance Minister in Austria for a while and dabbled in stock markets till he finally became Professor of Economics at Harvard. He wrote a two-volume treatise on Business Cycles in 1939 and a masterly History of Economic Analysis, which was published posthumously.

But his best-known book was the one he wrote when he was only 30 years old. The Theory of Economic Development is a book which breaks the mold of economic theory from the static equilibrium visions of Ricardo and Walras. Schumpeter gave an explanation of what made capitalism the dynamic disequilibrium system it is, and indeed he thought he could refute and improve upon Marx as he expounded his theory. He saw capitalism as subject to long cycles of boom and bust, cycles which could last 50 years. But these cycles were evidence of the creativity, albeit the destructive creativity, of capitalism. Each cycle was set off by a cluster of innovations. Railroads would be one example. Innovations were the clever exploitation of existing ideas in technology which were waiting to be exploited for profit. Only an entrepreneur, a word rarely used until Schumpeter chose it to represent a special type of businessman, would have the vision to spot the potential gain. Ferdinand de Lesseps, who saw the potential of the Suez Canal, would be one such entrepreneur. Bill Gates in our day is another. Once an entrepreneur had launched an innovation, there would be followers and competitors who would add to the tide of investment. Most such investments were financed by borrowings from shareholders or banks. The payoff was not immediate but when it came, it was massive. The innovation transformed the economy, with many larger repercussions in sectors other than where it started. Thus railroads changed not only the cost of transport but the way people could build communities, resulting in urbanization with cities and towns. The boom set off by the innovation would last a while and then the excess profits would begin to dry up. The imitators would cut the margins of profit and a downturn would follow until another innovation occurred. Toward the end of the nineteenth century, roughly 50 years after the invention of the railroads, came the innovations in chemicals, electricity, telephones and automobiles, and bunched simultaneously they sparked another cycle. Silicon Valley characterized the innovation cluster in our day.

From Hubris: Why Economists Failed to Predict the Crisis and How to Avoid the Next One by Meghnad Desai, published by Yale University Press in 2016. Reproduced by permission.

Meghnad Desai is emeritus professor of economics, London School of Economics, where he was also founder and former director of the Global Governance Research Centre. He is a member of the House of Lords and chairman of the Advisory Board at the Official Monetary and Financial Institutions Forum. 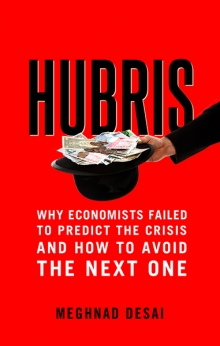