Elise Archias’s new book, The Concrete Body: Yvonne Rainer, Carolee Schneemann, Vito Acconci, examines the 1960s performance work of these three New York artists who adapted modernist approaches to form for the medium of the human body, finding parallels between the tactility of a drip of paint and a body’s reflexive movements.  In this excerpt from the book, she explores several works by Vito Acconci.

When viewing documentation of the many works Acconci made between 1969 and 1971, one repeatedly sees performances of either adaptation or desire: Acconci’s body flinching, sweating, gagging on the one hand; his body moving or gesturing toward an unknown, but always somehow particularized and specified, person or group of people on the other. One logical method for interpreting the confluence of these two threads has been to view Acconci’s series of works through the lens of poststructuralism, as performances of constraint and coercion. There are good reasons to see in many of his individual performances metaphorical demonstrations of himself as either the victim or the perpetrator of the softly violent structures that poststructuralism claims determined subjectivity in modernity, reminding their audience, like Michel Foucault’s Discipline and Punish or Judith Butler’s Gender Trouble, that the body is not outside such constructions, but is the site where power realizes the bulk of its most deeply penetrating manipulations.

Acconci’s figure in Blindfolded Catching is nothing if not disciplined, going through the motions of an impossible task, nearly defenseless against its senseless abuse. Meanwhile, the administrative voice that comes through Specification Piece’s officious missives could be seen to perform an operation similar to the reductive but irresistible “‘Hey, you there!’” called out in Louis Althusser’s account of us all as “individuals [who] are always-already interpellated by ideology as subjects,” published in the same year. On many levels, these works convey Foucault’s understanding that “the mechanisms of power are addressed to the body, to life, to what causes it to proliferate, to what reinforces the species, its stamina, its ability to dominate, or its capacity for being used.” An argument about Acconci that leaned heavily on Foucault might eventually decide that Acconci’s works were leading away from the body, that like Foucault, Acconci discovered that “nothing in man—not even his body—is sufficiently stable to serve as the basis for self-recognition or for understanding other men.”

Alternatively–although ultimately not what I will argue–we might see Acconci’s performances as agreeing with Butler that “the body is not a substance, not a thing, not a set of drives, not a cauldron of resistant impulse, but precisely the site of transfer for power itself. Power happens to this body, but this body is also the occasion in which something unpredictable happens to power; it is one site of its redirection, profusion, and transvaluation.” Butler’s insights in hand, we could argue that structure in Acconci’s work is being forced to take the body into account through the body’s refusal to comply. Rather than offering a self-martyring critique through imitation, a Butlerian version of body and structure would offer the body and its failures as a site of the transformation of power. In Acconci’s performances, the structure may be understood to repeatedly adapt to the body’s limits and needs, but the transformation comes at the price of the human actor’s collapse or his being halted at limits. As a model for a transformative critique of everyday life, such an understanding is grim at best.

To find primarily critique in Acconci’s works would be in accordance with the harsher notion of structure and culture circulating in the conceptual art movement that embraced his work in its galleries and journals and in the leftist consensus generally that emerged in the wake of 1968. The antiwar movement had swelled worldwide in 1968 and brought New Yorkers to the streets, not least among them artists, for whom it was a uniting cause across multiple differences; Martin Luther King had been shot; and the radical feminist movement was just beginning. Acconci was motivated by his sympathy with the growing critical consciousness that Shulamith Firestone attributed to the disastrous “result” of the traditional family structure in Western culture and named “the power psychology.” Firestone defined this tendency as “an aggressive chauvinism now developed enough to destroy us,” but it was evoked perhaps no more economically than by the period catchphrase “the system.” Carl Andre articulated the artists’ version of this shared sensibility on the back of an issue of Interfunktionen, a contemporary art journal out of Germany, in which Acconci’s work also appeared—“Art is what we do. Culture is what is done to us”—and then, more rousingly, on the following issue’s back cover: “What could culture do to us if art is what we didn’t do?” As Acconci explained much later, “In the late 60s, art and artists were authority figures of a kind. The idea was to attack this value system, in the same way that you had to attack the American government’s war on Vietnam, attack patriarchy, or the mercantile system that ruled art galleries. There were these pedestals that had to be knocked down, and in order to do that, they had to be demystified. Brought down to the level of perfectly ordinary activities. . . . It was around then that I read my first feminist writing, for example.”

The broad emphasis on structure in an art world informed by conceptual art ensured that abstract ideas were given priority over sensuous pleasure, making clear the artist’s critical awareness of art’s complicity with the current spectacular hegemonic culture. In an article on the new category of “body art” that included Acconci’s work, for example, the critic Cindy Nemser readily volunteered her understanding that “the body artists . . . are attempting to give us a message about the frightening and dangerous aspects of our society.” The systems addressed by this broadly sweeping critical understanding in 1970 were understood to oppress on levels less conscious than the level of public struggle over rights that had been the emphasis during the previous decade of protest and social movements. “There are structures that limit things,” Acconci said in an interview with Nemser in 1971. “An art work might be a means to see and examine possibilities that these structures have eliminated.” Like many in the feminist and black power movements attempting to make “personal” forces of oppression “political” and thus public, Acconci subscribed to “the idea of social structure setting up categories of privacies. A lot of my work is involved in getting rid of these privacies. . . . People don’t have to be limited by roles, they don’t have to be rigidly enclosed in categories.” The new sense of overbearing rules, of governing structure per se, was as deeply rooted in the very fibers of one’s body as it was imposed by the family unit, urban planning, the museum, or any of the other entities that Althusser had called “ideological state apparatuses,” and it sent artists and activists alike searching for new ways to address wider social problems.

Acconci’s efforts are quite different from many less embodied examples of conceptual art, however. A great deal of conceptual art did its best to appear as all structure, embracing language, maps, and statistical notation, while shunning subtle variations in texture, density and volume. Mel Bochner put forward a dismantling of the givenness and authority of language by presenting it as only one sign system among many in Language Is Not Transparent (1970), shown in Language IV at the Dwan Gallery with Acconci’s Specification Piece. Scrawled in chalk directly on the wall at chest level over a painted black rectangle that has been allowed to drip messily past its bottom edge toward the floor, Bochner’s earnest message reads like desperate graffiti, simultaneously negating language and its painterly alternatives, with no good ideas about where communication might turn next.

Acconci’s approach to language was much more immediate, acted out with crude gestures or stamped out in order to cross over a communication boundary as efficiently as possible, and as a result his work seems much less cloaked in ambivalence than Bochner’s, conveying much less the sense, described by Eve Meltzer, of fascination with the possibility of reducing the world to a rational system, but in the process only proving that it cannot be so reduced. Acconci does not avoid directly framing or naming or providing an opportunity for feeling what it was that informational systems failed to encompass. If Bochner expected viewers to know where to locate their own full, sensuous sociality off-site—in effect, privately—Acconci still thought it should be given form within the space of art.

How we understand the signifiers of embodiment is one of art’s ultimate questions, revisited and supplied different concrete answers throughout history. Acconci’s work emphasized structures by making them obvious and constraining, but he did so using the physical body as his medium, rather than sentences, with their more linear logic. His body was not before language, gender codes, or the programs of action he intentionally imposed on it to stand for cultural systems. Indeed the body appeared through these schematic conditions, displaying more of its particular qualities and ways of moving the more it was uncomfortably compelled to respond to the schema. Yet the fleshly, shifting, factual forms that his body takes on cannot be fully accounted for by the conceptual terms of the work—hand, mouth, or even gagging. These forms are not determined by language in his performances so much as by need, impulse, and desire. The fact that the body’s difference from language so urgently needed emphasizing circa 1970 is what this book is noting.

Elise Archias is assistant professor of art history at the University of Illinois, Chicago. 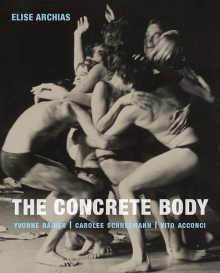