America’s Founders created a dynamic and activist government.  This contrasts radically with the standard popular interpretation.  With an almost unanimous voice scholars have claimed that America’s Founding constituted a revolution against the state.  Britain’s government had become too powerful, too intrusive, and too demanding for colonists in British America used to being left alone.  When the British Empire developed a state, the Americans decided to go their own way.

While recent scholars have argued that the United States did not always have a weak state, that Americans developed a government or governments over the course of their history, the founding moment has remained a libertarian one.  Whatever necessity impelled the Americans to do later, in the 1760s and 1770s they bristled against the growing power of the British Empire.  Politically this view implies, that returning to America’s founding principles means returning to an era of small government.

In fact, this widely held notion that America’s Founders wanted to create a weak state with limited capacity is deeply mistaken.  Instead, America’s Founders formed part of a pan-imperial movement that sought to promote activist government.  In particular the Patriots sought a government that would advance colonial development through subsidized immigration, active support of colonial trade, and the elimination of the slave trade.  In their view the British governments in power since the accession of King George III had abandoned fundamental British principles; they had abandoned the British constitution.

The trans-Atlantic Patriot movement had coalesced in the 1720s and 1730s in opposition to the policies of the Whig Prime Minister Robert Walpole.  Walpole had been obsessed with the burgeoning British national debt.  In his view the British government need to balance the budget by eliminating excessive and wasteful spending.  Walpole believed that the British economy could only remain vibrant if the government reduced spending and provided legal support for the colonies of production.  Walpole believed that the only valuable British colonies were those that produced precious raw materials—sugar, tobacco and rice—by slave labor.  By growing these goods and selling them in European markets, Walpole and his supporters expected to simultaneously generate great profits for Britons and generate substantially increased customs revenues to pay down the debt.  Establishment Whigs believed that the key to Britain’s future prosperity lay in supporting colonial slave societies.

Patriot opponents of Walpole, by contrast, offered a vastly different diagnosis of the British imperial economy.  Patriots, on both sides of the Atlantic, argued that sustained economic growth depended on the creative interplay of production and consumption.  They advanced their arguments in a series of pamphlets, newspaper articles, and contributions to the newly fashionable magazines.  In particular colonial consumers were necessary to purchase British manufactured goods such as cloth, silverware, and ceramics.  They also believed that the British economy would benefit greatly from prying open Spanish American markets to allow the export of British manufactured goods.  Since consumers played such a large part in the Patriot analysis, they were necessarily critical of slave societies which purchased few consumer goods.  They also urged the state to subsidize immigration to the colonies to generate more colonial consumption.  In fact, the new Patriot colony of Georgia banned chattel slavery and depended on state-supported immigration.  Patriots on both sides of the Atlantic also wanted the state to support British trade by providing bounties to support the development of diverse colonial economies and to provide the military wherewithal to compel the Spanish to accept free trade in the Caribbean and South America.  By supporting the most dynamic sector of the British economy, the colonial sector, the Patriots believed the state could do far more to pay down the debt than by pursuing austerity measures and supporting slave colonies of production.

It was this Patriot political economic program emphasizing colonial consumption, first enunciated in the 1720s and 1730s and elaborated in swaths of pamphlets, newspapers and broadsides on both sides of the Atlantic in the 1740s, 1750s, and 1760s that provided the ideological backbone of the Declaration of Independence.  The Continental Congress’s Committee of Five that drafted the Declaration in 1776 complained bitterly that after the accession of George III in 1760, the British ministry had turned their back on the Patriot policies that had been adopted after Walpole’s fall from power in 1742.  In particular, they complained that George III and his ministers had vetoed every attempt by colonial assemblies to limit the slave trade and diversify colonial economies.  George III, in the words of the Committee, had refused his assent to laws, the most wholesome and necessary for the public good.”  Instead of replacing slaves with immigrants who could freely and regularly purchase British manufactured goods, the British ministry and their King has sought to prevent immigration to British America.  George III, in the words of the Declaration, “has endeavored to prevent the population of these states; for that purpose obstructing the Laws for Naturalization of Foreigners; refusing to pass others to encourage their migrations hither, and raising the conditions of new appropriations of lands.”  Finally, instead of supporting colonial development with subsidies and using the British navy to pry open Spanish American markets for colonial and British goods, the British ministry cut “off our trade with all parts of the world.”  The Second Continental Congress condemned the British imperial state for having done too little to promote colonial development since 1760.  America’s Founders sought to create an activist government that would do what the British state had ceased doing.

The Second Continental Congress unanimously adopted the Declaration of Independence because it created a new Patriot state.  Indeed when John Adams, a member of the Committee that drew up the Declaration, wrote to his wife celebrating its adoption he emphasized the creation of a new state with expansive powers.  He quoted enthusiastically from the concluding section of the Declaration.  The new American state, Adams quoted, would “have full power to make war, conclude peace, establish commerce, and to do all the other acts and things, which other states may rightfully do.”

Steve Pincus is the Bradford Durfee Professor of History at Yale University. He is the author of several books on seventeenth- and eighteenth-century British history. 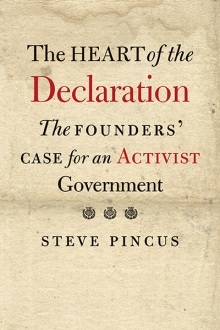