In 1492 around 8 million Indians lived in North America. That number is not large, especially for an entire continent. More than 8 million people live today in the city of New York. Still, the number is significant. To compare, the British Isles held 2 to 3 million inhabitants in 1492. France, Europe’s most populous nation, had about 15 million people. And in Asia, over 100 million lived in China alone. So, thinking of 8 million Indians spread across North America, let’s join the soaring hawks. What we see below is a continent that is less of a wilderness than we expected. No matter where we glide, almost everywhere we see plumes of smoke.

Where there’s smoke there’s fire, the saying goes. And Indians used fire for more than cooking and keeping warm. High above the Mississippi, smoke swirls upward from fires used to build dugout canoes. The fires were allowed to burn until the boat’s insides had been hollowed out. On the river, dozens of dugouts glint in the sun, forty to sixty men in each one. No small birch-bark canoe, this! On a day of ceremony or war, the boatmen’s faces are painted reddish-brown and many heads sport white feather plumes. Some Indians kneel as they paddle, others stand behind them, shields ready to ward off an attack. A canopy at the stern shades each canoe’s commander.

Across the Plains, Indians set fires to stampede buffalo and in the Great Basin burn grasslands to flush lizards from the ground. Some peoples burn fields to encourage wild blueberries or sunflowers to grow; others set fires to drive off hordes of devilish mosquitos. In the Rockies, Indians even use fire to celebrate. Entire fir trees are set aflame, their branches blazing sparks into the night like fireworks. Humans from one end of the continent to the other all use fire as a tool for shaping the land to their liking.

In other ways, Indian peoples differed greatly. In fact, we might say that the motto of North America in 1492 was the opposite of E pluribus unum. Not “Out of many people, one”, but “Out of one continent, many peoples”. Depending on which birds you follow, you’ll see large differences in the ways Indians adapted to the world around them. Some lived in simple bands, hunting and gathering food. Other civilizations boasted farm fields, monuments, temples, cities, astronomers, high priests, and rulers.

A flock of geese setting out from the western Arctic will spy Inuit bands chasing whales in umiaks—open boats made from walrus skins stretched over driftwood. The Inuit (also known as Eskimos) possess harpoons strong enough to pierce the tough skin of whales, a valuable source of food. (Whale blubber also burns nicely in oil lamps.) Inuit women have developed the skill of sewing seal gut and fish skin to make clothing that fits the body more closely and is thus warmer for those living in such wintry lands.

Two thousand miles to the south, in present-day Oregon, the same geese fly through the Willamette River Valley. Below, Indians mend a fish trap—a line of sticks pounded into the river bottom along a rapids. Salmon swimming upstream can make their way through only a few openings, and there they are caught in woven baskets. The climate is milder, and there are many seals and otters, clams and mussels, large porpoises and thousands of small candlefish, a creature so fatty it can be dried and burned in a torch.

Farther south, birds crossing the Sonoran Desert in present day Arizona can see lines carved in the land. These are not the branches of rivers, for their lines run too straight. They’re man-made. In the centuries after AD 300, the Hohokam people dug six hundred miles of canals, some over sixty feet wide, to bring water to the beans, squash, and corn they grew. The birds in 1492 can still see the remains of the canals, but the Hohokam are nowhere to be found. As to the reason why, we’ll return to that question in a moment.

In short, the Indian peoples of North America differ greatly from one another partly because the environment has forced them to invent different ways of surviving. In the mild and wet Pacific Northwest, who would think about making canals to irrigate crops? On the other hand, no desert Indian would invent dugout canoes in a land where large trees are unknown.

The environment is not the only reason that the Indians of 1492 differ among themselves. Even in similar climates, different humans will think of different solutions to the same problems. By 1492 people had been living in North America for thousands of years—long enough to develop different beliefs, customs, and cultures. In the dry lands of the Great Basin, where survival was difficult, small bands were each led by a hunter who had proved himself. Indian societies of the southeast had much larger settlements and more complex political systems. The Natchez, for example, divided themselves into different ranks, ruled by a king (known as the Great Sun) and his relatives (Little Suns). Below them came nobles, known as Honored People, and, lowest of all, a larger class called Stinkards. As the name of Great Sun suggests, sun worship played an important part in the religious life of the southeastern Indians.

From A Little History of the United States by James West Davidson. Reproduced by permission.

James West Davidson, a widely respected historian, has written on American history and the detective work that goes into it, as well as books about the outdoors. He lives in Rhinebeck, NY. 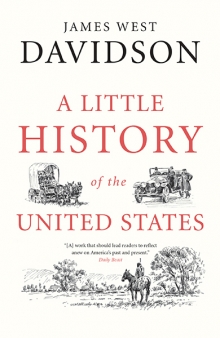