The Paris Agreement on climate change is set to enter into force on November 4, 2016, after its ratification by more than fifty-five countries representing over 55% of total greenhouse gas emissions in early October 2016. This was hailed by US President Barack Obama as “a historic day in the fight to protect our planet for future generations.” What does this mean for Africa?

As the continent perhaps most vulnerable to the effects of a changing climate, the early ratification of the agreement is an encouraging sign. But the greater challenge was always going to be implementing the nationally-determined targets in the agreement. Many of these targets rely upon ambitious (some might say naively hopeful, or “exotic Dr Strangelove options”) and unproven future carbon sequestration technologies. And even if all the targets are met it is no guarantee that we will avoid dangerous levels of climate change. For a continent already experiencing water shortages and droughts, heat waves and flooding, and changing disease vectors, the likely prospect of three to four degree centigrade rises in temperature over the rest of this century, as the world has passed 400 parts per million of carbon dioxide in the atmosphere, is a daunting one. Although environmental changes do not drive political affairs in a straightforward or linear way, the consequences of a changing climate are likely to be profound for African economies, societies, institutions, and conflicts.

The political ramifications of the Paris Agreement go beyond the effects of climate change itself, however. The diplomatic process of negotiating and implementing a global climate deal can contribute to changing perceptions of Africa’s place in world politics, and some countries emerge as new leaders. Morocco, which is hosting the next conference of the parties to the UN Framework Convention on Climate Change in December 2016, has already ratified the Paris Agreement and has promised far-reaching action on greenhouse gas emissions. This includes reducing emissions by 13% below business as usual by 2030, or by 32% with sufficient international support. It has also pledged to increase its renewable electricity capacity to 42% by 2020 if international support is forthcoming, building the world’s largest concentrated solar power plant in the desert at Ouarzazate. These actions led the influential Climate Action Tracker website to conclude that Morocco is doing its “fair share” of actions to keep temperature levels to below two degrees centigrade.

Other early ratifications of the Paris Agreement came from Ghana, Cameroon, Madagascar, Mauritius, Morocco, Namibia, Niger, Rwanda, Senegal, Somalia, Swaziland, and Uganda. Some of these African countries are positioning themselves as leading exemplars of transitions to a “green economy” or champions of sustainable development. Rwanda is particularly significant in this respect: it has a high profile national strategy for Green Growth and Climate Resilience, and has been selected to host an African Centre of Excellence for the Sustainable Development Goals. The Kagame government is using the green economy discourse to promote, extend, and resource existing development programs around the “sustainable intensification of agriculture,” as well and energy and transport interventions, within a broader hyper-modernizing drive. The politics of such a strategy—in a country where control over land is a contested issue, and where mass mobilization of the population also has particular historical salience—has important potential implications for democracy and human rights.

There are also some notable absences from the list of countries who have ratified the Paris Agreement. Whilst Zambia and Eritrea have not yet ratified, they have been identified as committing to particularly ambitious targets by new research. In contrast, South Africa once regarded itself as a leader on climate change and sustainable development, but the Zuma government now has plenty of more urgent political priorities and crises to deal with. South Africa’s intended contributions to greenhouse gas mitigation were rated “inadequate” by the Climate Action Tracker website, as their target actually represents a 20-82% increase on 1990 levels (excluding controversial reductions from land use changes and forestry). South Africa’s continuing coal addiction means it is hard for it to play the continental climate leader it once aspired to.

More generally, it is doubtlessly significant that other African absences from early ratification include the oil giants of Nigeria, Angola, and Sudan. It is important to note that ratification itself is not a measure of climate ambition, but a global transition to a post-fossil fuel world would pose the greatest shock to countries like these whose economies are heavily dependent on oil revenues. The Nigerian INDC, for example, discusses energy efficiency and the ending of gas flaring by 2030, but the first paragraph makes clear their primary focus on “direct development benefits and sustainable growth of the economy” which have been threatened by the decline in world oil prices.

The politics of climate change extend well beyond the direct impact of environmental changes on conflict and development. Countries around the world, including those in Africa, are reassessing how to organize their economies and societies in the light of profound global shifts. Whilst levels of ambition, capacity, and creative vision vary, the overall assessment of most activists is that we are still woefully short of what is needed to ensure a safe, equitable, and sustainable future. For Nnimmo Bassey, Nigerian environmental activist and chair of Friends of the Earth International between 2008 and 2012, the Paris Agreement “betrayed the poor, the vulnerable and all those already suffering the impacts of climate change. It set the stage for a climate-changed world and did little about averting it.” Whilst President Obama might be “a little more confident that we can get the job done” now that the Paris Agreement has been secured, the scale of political, economic, and social transformation required in Africa—as elsewhere—is monumental.

Carl Death is senior lecturer in international political economy at the University of Manchester. He lives in Manchester, UK. 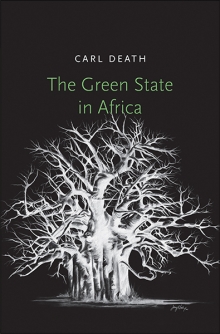