U.S. citizenship has emerged as an issue several times during this year’s presidential campaign. There were debates on whether birthright citizenship is (and should be) protected by the constitution, and concerning the relationship between birth in the U.S. and descent from a U.S. citizen in determining whether individuals met the “natural born citizen” test for the presidency. If the latter point had been pursued in more detail (and not just to embarrass an opponent, however briefly), this could have highlighted the legacy of the transformation of allegiance to a monarch into membership in a republican community of citizens. Reconciling the language of seventeenth-century court cases and the tenets of English common law with brief and sometimes enigmatic statements in eighteenth-century American constitutional documents was never easy, but the attempt has produced a functioning definition that has remained anything but static. It has also, however, led to the somewhat paradoxical state of affairs that an open concept of citizenship in a nation proud of its diversity remains tied to a language that maximizes the semantic distance between “natural” insiders and “alien” outsiders.

In a more fundamental sense, however, the presidential campaign points to a potential shift in perspectives on citizenship. While the Democratic and Republican candidates obviously hold diametrically opposed views on how accessible the United States should be to immigrants or on when and how immigrants should become citizens, a common thread has been the promise to increase citizenship’s economic implications by protecting citizens’ jobs and incomes – either by preventing the shift of jobs overseas, or by organizing the repatriation of jobs and sharply reducing immigration. This increasing focus on citizens’ economic prospects is by no means limited to the United States. It provided an important element of the motivation for pro-Brexit votes in the United Kingdom, and explains the rise of the ‘populist right’ and of protectionist currents within the ‘left’ in many European countries at least in part.

That economic implications of citizenship should require emphasis at all is, at first glance, somewhat surprising. Modern ‘western’ citizenship, as it was conceived after the Second World War by authors like T. H. Marshall, was supposed to provide the members of a state not just with the right to political participation, but also with relief in times of emergency and the income required to participate fully in society. The admission of younger people to the vote, the expansion of social services (provided by employers, insurance companies, or governments), and the experience of rising prosperity seemed to conform to this implied promise, however unevenly these processes were experienced in different countries or regions at various times. This made it easy to overlook that the model took relatively little notice of frontiers. In any society with even a modest degree of mobility across national boundaries, the aspects of citizenship – political participation, access to various types of economic opportunities such as accepting employment or merely buying and selling goods, and the right to economic relief in circumstances ranging from acute illness to permanent support – will not apply to the same group of people. Economic citizenship as well as social citizenship have generally been granted on more generous terms than political citizenship – either explicitly, like in the European Union, or in practice, as in the United States. In particular, corporations have become entities that may be good corporate “citizens”, but that are not tied to any given country as most political citizens are.

Depending on one’s normative point of view as well as on one’s interests, contemporary globalization therefore created one of two problems. Either there is an issue with the boundaries of political citizenship, which excludes potential stakeholders like immigrants, foreign economic actors, or – as with the Brexit vote – long-term expatriates from decision-making and can lead to economically irrational outcomes. In this case, the solution might be to facilitate access to political citizenship, either by lowering barriers to naturalization or by expanding the right to vote in other ways, for example by resurrecting the nineteenth-century U.S. practice of “alien suffrage”. Alternatively, the problem lies with the expansion of the boundaries of economic (and potentially social) citizenship to international corporations and (irregular) migrants. In that case, the solution would be to erect barriers against the economic participation of outsiders with the aim of re-creating domestic markets from which political citizens may profit unequally, but from which they would ideally profit more than outsiders living beyond physical or metaphorical walls, who could only gain economic participation rights with a restricted scope in limited numbers. (Historically, this option has usually gone hand in glove with an ethnic redefinition of citizenship, and it shows signs of doing so again today.)

The outcomes of coming elections in the United States, France, Germany or Austria as well as the fate of free-trade negotiations will provide some indication of support for either position in the electorate, or, to put it differently, among the political citizenry. While it is unlikely to be decisive for the outcomes, it is at least notable that the terms of the debate on citizenship are framed in a way that privileges geographic immobility – for historical reasons, and not just in English.

Andreas Fahrmeir is professor of nineteenth-century history at Johann Wolfgang Goethe Universität, Frankfurt. He is the author of numerous articles and books, including Citizens and Aliens: Foreigners and the Law in Britain and the German States, 1789–1870 and the forthcoming Revolution–Reform–Revolution. 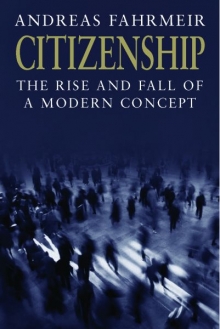