I first became aware of the creative life that flourished in mid-twentieth-century Lexington, Kentucky, around 2001. In quick succession I discovered Guy Davenport’s writing and Ralph Eugene Meatyard’s photographs. As I embarked on a career as a writer on art, Davenport’s essay collections became a touchstone. I was awed by his erudition, which encompassed classical cultures, the experiments of modernist poets, and much in between. His writing sent me scurrying to Google and to libraries; I savored the short meditations in Every Force Evolves a Form.

Some time later, when I found a used copy of his book The Geography of the Imagination at the Strand in New York City, I was surprised to discover its penultimate essay is about Meatyard. “I remember thinking,” Davenport writes of their first encounter, “that here was a photographer … who got many of his best effects by introducing exactly the right touch of the unusual into an authentically banal American usualness.” Davenport understood what appealed to me about Meatyard’s photographs, and that understanding was borne, in part, of their friendship.

The connection between the two men was reinforced in my mind by a 2004 exhibition of Meatyard’s photographs at the International Center of Photography. From that time I tried to link together what I discovered of Kentucky culture. It was not hard. Trappist monk and best-selling writer Thomas Merton: friend of Davenport and Meatyard. Farmer and cultural critic Wendell Berry: friend of all three. Poet and filmmaker James Baker Hall: friend of all four. By the time I was invited, in 2011, to curate an exhibition for a nonprofit gallery in downtown Manhattan, I proposed surveying these figures in an attempt to discover how their friendships nourished their creative lives.

Due to logistical difficulties that project did not come to pass, but the disappointment proved a blessing in disguise. Two years later I joined the Cincinnati Art Museum staff. I now lived just eighty miles from Lexington. In my new role as the museum’s curator of photography, I revisited Meatyard’s work and the scholarship that surrounds it. The Lexington Camera Club is continually name-checked in this literature, but no scholarly consideration of the club was readily available. Was this oversight? Did the club merit further study? I hopped into my car and headed south on I-75 to find out.

I visited institutions and individuals and, in time, I saw the contours of a thriving artistic community. Some of the names were familiar to me. Van Deren Coke, best known as a curator and historian of photography, gave up his claim on the family hardware business in order to pursue his love of the medium. Thomas Merton, I learned, was given a camera in 1961 and used it enthusiastically until his death in 1968. James Baker Hall, whose writing I had also admired, had operated a photo studio while dividing his time between Kentucky and New England. Poet and publisher Jonathan Williams, who lived in North Carolina, made regular trips to Lexington and ensured these men came to know each other.

Other names were completely unknown. Zygmunt S. Gierlach, a radiologist, had not only been one of the club’s most adventuresome photographers but also hosted exhibitions in his office at Doctors’ Park. He used his medical equipment to create stunning abstract compositions, of which fewer than twenty survive.

When I first inquired about his archive at the University of Louisville, Cranston Ritchie’s photographs had not been seen publicly since 1971. In the five years he spent photographing, Ritchie proved as experimental as any member of the club. His photographs are one of the revelations of the exhibition “Kentucky Renaissance: The Lexington Camera Club and Its Community, 1954 – 1974” (currently on view at the Cincinnati Art Museum) and the accompanying catalogue.

During two years of active research and writing, I was inspired by the warmth of these artists’ friendships, the importance of the place where they lived, and the creative reciprocity embodied in the Lexington Camera Club. This project proved timely: in 2014 a younger generation of photographers approached Guy Mendes about relaunching the club. The group has met and exhibited regularly since then.

Kentucky Renaissance is a story told through photography—the exhibition includes more than 150 pictures, and more than one hundred are reproduced in the book. But I remain interested in the literary side of the story. To that end I’ve invited several of Kentucky’s leading writers to read from their work at the Art Museum. On Saturday, October 22, we welcome Ed McClanahan, Maurice Manning, Erik Reece, and Mary Ann Taylor-Hall.

Brian Sholis is curator of photography at the Cincinnati Art Museum. 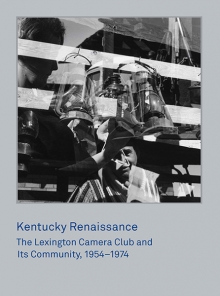