‘Tobias and Sara on their Wedding Night’ (ca.1520), © Victoria and Albert Museum, London

Large swathes of the modern industrialized world are in the grip of a sleep-deprivation crisis. So say Jonathan Crary and Ariana Huffington, who represent just two voices in a chorus of recent critical commentaries highlighting the corrosive effects of our globalized 24/7 culture on sleep’s duration and quality. Why indulge in sleep when we could be playing games on our smart phones, exchanging snap-chat messages with friends on the other side of the world, or keeping a close eye on the financial markets in London, New York or Tokyo?

The influence that changing material environments have on human sleep, and especially the influence of electrical and digital technologies, have attracted considerable interest in recent years. Sleep researchers and medical practitioners increasingly venture beyond the inner workings of brain and body to create a more holistic picture of how sleep-quality is influenced by where and on what humans sleep, by who they share their beds with, and by what they get up to in the precious hours before bedtime. The results of these investigations have principally given rise to yet more technologies that promise to streamline sleep-quality with new hybrid mattresses, to support its increasingly arrhythmic practice through the installation of specialist sleep pods and chairs in universities and workplaces, or to radical pharmaceutical interventions that promise to reduce humans’ biological need for natural refreshment each night. The U.S. military’s sleep-reduction programme, for example, aims to improve performance in combat by identifying the right cocktail of drugs that will allow soldiers to train or fight for up to seventy-two hours without taking a break. Overcoming exhaustion, or exploiting the fatigue of your enemy represents, it seems, a powerful tactical weapon within the armories of military forces. The temptation to wonder, in awe, at our technological capacity to mechanize human bodies in this way is powerful. Sleeping for eight hours each night has become, in the estimation of some, for wimps.

The urge to transform people into automated gerbils that can tread the rungs of a time-wheel that never stops is however an impulse whose roots are worth probing more deeply. These roots do not lie, primarily, in the world of medicine or technology, but in the cultural value that we attach to sleep in our own time. Our physical need for sleep transcends time and place, but our attitudes towards it, and the way that we choose to approach it, certainly does not. Immoderate sleeping habits in the modern world have become detached from the religious and moral principles that underpinned them in earlier times. Those who succeed in minimizing their sleeping hours to pursue work or leisure activities are routinely celebrated, rather than censured, for their ambition and superior fortitude. This deregulation of sleep’s moral boundaries has thus legitimized an impulse to curtail sleep’s natural rhythms.

Those who seek to protect sleep’s natural temporal rhythms and health-giving properties rightly demand a change in attitudes and environmental approaches to sleep, and history can play an important role in uncovering radically different understandings of what sleep is for, and how it should be practiced. On 31 March 2016 The New York Times published a ‘Letter of Recommendation’ to segmented sleep: the bi-phasic sleep pattern that characterized many pre-modern communities whose nocturnal habits were more closely attuned to the seasonal rhythms of nature. The absence of digital and lighting technologies did, of course, play a crucial role in the way that pre-modern communities approached sleep, but even more important was the cultural importance that they attached to a good night’s sleep.

In early modern Europe, sleep’s critical importance was deeply rooted within a widely-accepted set of good Christian behaviors and within a preventative culture of healthcare that was dominated by the principles of the six non-natural things – a set of environmental and dietary rules in which well-regulated sleeping and waking patterns were central to long-term physical and mental health. The main ambition of non-natural principles of healthcare was to preserve body, mind and soul in harmonious balance with God and nature. The health of body and mind was secured by careful regulation of the six non-natural categories, which prevented disease and assured a long and healthy life. Regular habits of sleeping and waking were thus a foundation stone upon which human life was believed to depend. This was a world in which sleeping soundly was understood to be pivotal to physical vigor, emotional well-being, prosperity, personal reputation, and spiritual health. Sleep’s healthy practice thus sat at the heart of daily life, rather than at its margins. It was a practice over which people exercised a great deal of agency, and sleep’s successful performance usually relied on an investment of time rather than money. The sleep-strategies of the pre-modern world have clear relevance today and they prompt us to open our eyes more fully to the effects, both positive and negative, of prevailing cultural forces that shape our sleeping environments and our attitudes to sleep in very distinctive ways. An urge to optimize our physical and cognitive abilities is common to many societies and cultures in past and present, but the way we choose to act upon it reveals a great deal about our attitudes towards ourselves and towards the world that we inhabit.

Sasha Handley is senior lecturer in early modern history at the University of Manchester. Her previous book is Visions of an Unseen World: Ghost Beliefs and Ghost Stories in Eighteenth-Century England. She lives in Manchester, UK. 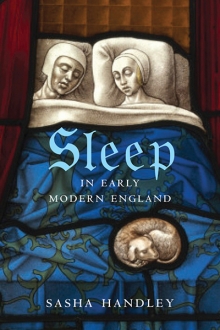