Understanding the bigot calls for a phenomenological sketch that explains why prejudice appeals to him, how he chooses his targets, and what impulses are common to his worldview. Quick dabs are necessary to shade his frustrations, brushstrokes highlight his way of thinking about the world, bold lines demarcate the roles that he plays, and touches of color enhance his political ambitions. A phenomenological perspective on the bigot fosters an interdisciplinary investigation that weaves together the existential, psychological, sociological, and political elements shaping what Jean-Paul Sartre once termed “the etiology of hatred.”

The bigot is not always white, not always male, not always rich, and not always conservative or fascistic. He has joined various political parties and movements. His style changes in different historical circumstances. But there are unifying impulses. The bigot always directs his hatred against those who threaten (or might threaten) his privileges, his existential sense of self-worth, and the (imaginary) world in which he was once at home. In that world, the bigot felt little guilt. His prejudice was the common currency. Few thought there was anything wrong with it. The bigot was comfortable, happy, and even genial. He often engaged in small acts of individual kindness to the subaltern in his own version of noblesse oblige. But his attitude changed once the subaltern no longer accepted his hegemony. The bigot’s world then became subject to criticism; it invited comparison with more democratic forms of society. His increasing resentment against those who were turning his world topsy-turvy was a logical consequence.

Sickened by the strivings of the subaltern, and limited by his own cognitive framework, the bigot is a prisoner of his prejudices. He validates himself by employing myths, stereotypes, and double standards. Conspiracy fetishism is always appealing. He is unwilling and unable to engage those who question his opinions or challenge his self-styled superiority. The less he understands the dynamics of modern life, the more insecure he becomes, and the more fanaticism becomes an option. Little wonder then that the bigot should often appear in traditional roles that are associated with an imaginary organic community: the true believer, the elitist, and the chauvinist. These roles are not mutually exclusive and, in fact, usually overlap. The degree of intensity with which they are played varies according to circumstances and the psychological makeup of the individual. But they are all susceptible to fanaticism and they all provide the bigot with a clear conscience. Without this understanding, his role playing makes no sense at all. As a true believer, the bigot hears the Lord’s voice and he condemns those who don’t, or interpret it otherwise; as the elitist, he knows what’s what and thereby insists on his superiority to those of other races, ethnicities, and gender orientations with different views; and, in the role of the chauvinist, his attitudes are the authentic expression of his community.

None of these roles is identical with intolerance or prejudice. There are gentle, tolerant, and progressive believers in every faith; elitists are not always bigots or even reactionaries; and chauvinists are often genuine champions of tradition and community. Each role can take a variety of forms: the true believer need not be a member of a church, the elitist can be a populist, and the chauvinist can be a loner. But they all serve the bigot well when fueled by contempt, intolerance, paranoia, and a desire for revenge. These roles justify his attempts to limit participation in what is (obviously) his world. Each helps identify the exploited and marginalized subaltern with the unalterable evil, inferior, and alien traits of the Other.

The bigot’s moral cognition and his intellectual outlook are constituted within a parochial life-world that is neither accountable nor transparent. He hides behind its traditions and established habits. But conformity is not much of an excuse. There have always been people who rebelled against the prejudices of their society and who refused to become bigots. There is always an ineradicable element of individual responsibility in prejudice that the bigot himself is unwilling to admit and anxious to obscure. That makes him content with how old beliefs, old rumors, and old loyalties congeal into myths and, in turn, beget stereotypes that justify his use of the double standard. The bigot’s prejudices rest on pre-reflective assumptions that become fixed, finished, and irreversible in the face of new knowledge, and thus shut down discourse.

Almost by definition, the bigot’s prejudice is hostile, destructive, and malignant. It crystallizes myriad forces that are learned (consciously or unconsciously) and then internalized. More is involved here than an individual with his particular psychological problems. As an anti-Semite, the bigot might exhibit an obsessive personality; as a sexist, he could be a narcissist; as a racist, he might harbor sexual fears or castration anxieties. Each bigot has his own neuroses, family conflicts, relatives, friends, social circles, geographical settings, and privileged targets of hatred. He is most often a member of the lower middle class, a small shop owner, or a farmer—though industrial workers and others can also prove racist and authoritarian in orientation. Not every social group or stratum will exhibit every prejudice: the bigot in one group is often the target of prejudice by bigots in other groups. But the bigot’s goal is always the same: to transform a living, disenfranchised, exploited, and persecuted subaltern into an object for his use, an Other whose fixed traits render him unholy, unnatural, or inferior.

For all the bluster, the bigot’s ego is extremely fragile. Perhaps that explains why he is happiest in a fascist or authoritarian regime. But he can also survive in a representative democracy and even under local participatory forms of rule. He is willing to join any movement: conservative, fascist, liberal, socialist, or communist. Again and again, however, he plays similar reactionary roles in public life. Language often fails him. Studies suggest that behind his words are “numerous, reified, stereotypical ideas and formulations whose very form implies that they do not reflect speakers’ opinions but, instead, are spoken without conscious intent.” The bigot’s frustration is understandable. Intellectuals, experts, politicians, and other outsiders seemingly have no respect for the bigot’s opinions and traditions. The atheist, the foreigner, the homosexual, and the other subversives are all seeking to change the natural order of things. The open society threatens the bigot’s hegemony and thus he engages in a politics that seeks to narrow the public sphere. Participation should be limited to those who are like him. Those unlike him are only conspiring against him anyway. They might be those who killed Christ, brought about the last economic crash, engaged in cultural subversion, blasphemed against Allah, exhibited ingratitude for the benefits that civilization has bestowed—or caused 9/11 either by supporting the attacks or by bringing God’s wrath down on America. It doesn’t really matter.

From The Bigot: Why prejudice persists by Stephen Eric Bronner. Reproduced by permission.

Stephen Eric Bronner is Distinguished Professor of Political Science at Rutgers University. He is also Director of Global Relations at its Center for the Study of Genocide and Human Rights and on the Executive Committee of UNESCO Chair in Genocide Prevention. 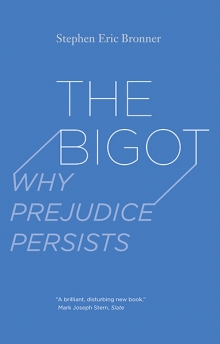