Last week, Alaskans received their annual dividend check from the Alaska Permanent Fund. The $53 billion savings fund was set up in 1976 to preserve and augment a share of the state’s resource revenues for future generations through prudent investment in financial markets. Every year since 1982, a portion of the fund’s returns has been distributed as a cash dividend to individual Alaskans. A resident of Alaska who has received all thirty-four annual PFD payments from 1982 to 2015 has received a total of $56,100 in 2016 dollar terms.

This year’s Permanent Fund Dividend (PFD) totaled $1022, less than half last year’s check and well below forecasts for the 2016 payment thanks to a cap on the dividend introduced by state Governor Bill Walker.

With Alaska facing a deep fiscal crisis amid slowing oil production and the collapsed price of oil, the government is scrambling to find new revenue to plug its multi-billion dollar budget gap. The steady returns of its sizable sovereign wealth fund, the largest of America’s eight state-level funds, proved irresistible. As Alaska’s oil revenues plummeted 88% from 2012 to 2016, the Permanent Fund averaged a solid real return of 7% over that same period. The Governor advanced a plan to convert the Permanent Fund into an endowment whose returns could be used for state spending.

The proposal met with opposition, both within the legislature and the wider public thanks to a strong sense among Alaskans that their Permanent Fund and its returns are ultimately the property of the people, not the government. The legislature rejected the endowment restructure plan, but Gov. Walker pressed ahead with it, using a veto power to redirect more than half of the $1.4 billion set aside for 2016 dividends to government coffers. The substantially reduced dividend checks that landed in Alaskan postboxes on October 6 were proof that much of the people’s money was now back in government hands.

This is not the first time Alaska has experienced tension between state and citizen over its sovereign wealth. In the late 1980s in the early years of the dividend, two Alaskans challenged the government’s right to tax the PFD in a case that went all the way to the U.S. Supreme Court. The petitioners argued that the underlying assets of the Permanent Fund—the natural resources of Alaska – were, according to the Constitution of Alaska, the property of the people. So too, therefore, were windfalls from their sale and the returns earned on the investment of those windfalls by the Permanent Fund. The government should not, on the petitioner’s view, be allowed to tax citizens on what was already their property.

The citizens ultimately lost, but judicial benches from Alaska’s District Court to the highest levels of the U.S. legal system recognized the distinct and competing claims of the people and the government to the state’s sovereign wealth.

In 2016, Alaska is once again mired in a legal battle over the rightful ownership of its sovereign wealth. Anchorage Democratic Sen. Bill Wielechowski and two longtime Alaska politicians filed a legal challenge to Gov. Walker’s veto on September 16. The lawsuit challenges the Governor’s right to veto the constitutionally-mandated transfer of money from the Permanent Fund to the dividend.

Alaska is not alone in experiencing such government-citizen rivalry over sovereign wealth. Today, there are over eighty such funds in the world, managing more than $6.5 trillion in assets. They are used for a range of laudable policy goals within their domestic sponsor communities including boosting intergenerational savings, smoothing volatility, investing in local infrastructure and tackling inequality.

But many of these funds are also plagued by tension over their assets. Conflict involving SWF assets has occurred in democratic and less democratic, prosperous and poorer contexts. Some of those conflicts concern the actual investment of sovereign fund assets. Australia and New Zealand both experienced public furor over controversial holdings in their SWF portfolios. At the same time as the Australian government was leading the world’s fight against Big Tobacco, becoming the first country globally to introduce plain packaging legislation for cigarettes in 2011, the government’s main sovereign investor, the Australian Future Fund, was shown to hold over AUD $150 million in tobacco investments. Following parliamentary review and public pressure, it ultimately divested these holdings, but with substantial resistance revealing a gap between the Australian public and the Future Fund management on desirable investment holdings.

Similarly, the New Zealand Superfund (NZSF), one of the world’s most responsible sovereign investors, faced public backlash over equity holdings in two mining giants implicated in questionable practices in Papua New Guinea. Norway’s sovereign fund had divested from the same companies five years earlier following revelations of severe environmental damage and violation of indigenous community and labor rights at the mines. But New Zealand’s fund had decided to pursue the investments and hold the stock with the belief they could lobby the mining company management to change behavior. This active investment approach met with opposition in the parliament and the public, as New Zealand citizens questioned whether they wanted their retirement savings funded in these morally dubious ways.  After substantial pressure, the NZSF changed positions and divested. Once again, a gap existed between the expectations of sovereign fund management and the public on appropriate ways to build up their national wealth.

At the heart of all these wrangles is the thorny issue of who ultimately owns, and therefore deserves to control and benefit from this wealth: citizen or state? One answer to this question relies on a fiduciary understanding of the state, inherited from the political thought of seventeenth-century philosopher John Locke. Under Locke’s classic theory of the state, government is an agent for its principal, the people. This principal–agent conception of the citizen–state relationship implies a set of fiduciary principles that require the people to maintain control over their government agent. One such principle is that all property obtained by the agent while acting on the principal’s behalf ultimately belongs to the principal and must be managed exclusively and solely for their benefit. On this view then, citizens are the rightful owners of sovereign wealth.

Realizing this theoretical ideal of citizen ownership over sovereign wealth in practice has far-reaching practical implications for the design and operation of sovereign funds. There are at least three areas of SWFs that require reform to achieve citizen ownership. These are the management, investment and distribution of sovereign wealth. Possible reforms to SWF management and investment include: improving citizens’ ability to directly influence and constrain SWF boards and management; greater transparency and direct accountability to citizens in fund operations; and ethical constraints on SWF investment to ensure the collective values of citizen owners are protected and promoted through sovereign wealth investment. The SWFs of Norway and New Zealand are exemplary in this regard, but most other sovereign funds require more democratization.

Citizens must also perceive and enjoy tangible benefit from their sovereign wealth, achievable through fairer distribution of SWF income. This can be done through collective or individual distribution of SWF returns to citizens. Alaska offers the main working model of individual distribution of a sovereign fund’s earnings with its PFD. But sovereign funds can also collectively distribute their earnings to their host community. There are different models for such distribution. The Norwegian approach requires a fixed portion of the fund’s value— capped at 4% of total fund capital (deemed to be an appropriate long-term real return on the fund’s portfolio)— to be transferred into the budget annually. At a size of US $850 billion, a 4% transfer amounts to around $33.5 billion redistributed fiscal revenue available for public spending. Alternatively, the Singaporean government is constitutionally permitted to channel up to 50% of the real and paper returns of its two investment funds, the GIC Private Limited and Temasek, to the budget annually through the ‘Net Investment Returns Contribution’ (NIRC). In Singapore’s 2015 financial year, the NIRC amounted to S $8.9 billion, constituting an impressive 13% of the budget and providing more resources for government spending to benefit Singaporeans.

America is a perfect crucible for realizing the citizens’ wealth vision of sovereign funds as it boasts the highest number of sovereign wealth funds in any one country, and one of those—the Alaska Permanent Fund—is the only sovereign fund to directly distribute returns to citizens. With that dividend under threat, our gaze should shift to the other state-level U.S. funds in Texas, New Mexico, Wyoming, North Dakota, Alabama, Louisiana, and now West Virginia to see if their design and behavior will ensure that government managers of SWFs are truly agents of their principal, the people.

Angela Cummine is a British Academy postdoctoral fellow in the department of politics and international relations, Oxford University. A political theorist with expertise in the governance of state-owned assets and economic inequality, she has advised a range of government and international organisations including the OECD, the International Forum of Sovereign Wealth Funds (IFSWF) and the Official Monetary and Financial Institutions Forum (OMFIF) on issues of public wealth governance and responsible investment. 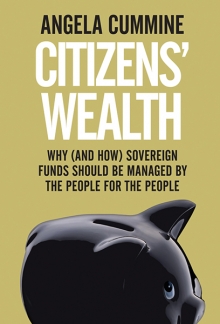