So many people take those simple snapshots of life, but there’s something about Eggleston that no one can match.  —Sofia Coppola

William Eggleston (b. 1939),”the father of color photography,” is celebrating, among other accolades this year, an exhibition at the The National Portrait Gallery and the release of the accompanying catalogue, William Eggleston Portraits, edited by curator Phillip Prodger. The is the first major exhibition of his work in London since 2002, and the first ever of his portraits at the NPG. In some ways, it’s astonishing that he has never before had a portrait-centric show in the UK, considering the length and breadth of Eggleston’s career. He began photographing seriously in black and white in 1960, and started experimenting with color in 1965. Known primarily for his images of the South — pictures of cars, highways, gas stations — many of his most arresting photographs are his portraits — relatives, friends, fellow artists, unknown passersby, all treated with the same care, and the same distance.

Photography, especially color photography, makes a kind of truth claim. In Prodger’s introductory essay to William Eggleston Portraits he writes, “Even more than black-and-white, color photography is associated with verisimilitude, the ability to depict something with such precision that it resembles reality itself.” Although this was the common association, Eggleston rejected this approach to image making. While color photographs do promise a kind of real account of a real moment captured, there is always something left out — the context, the temperature, the moments immediately before, or immediately after. Even “documentary” style photos contain some amount of artifice. Eggleston, who doesn’t consider himself to be making documentary photographs or social documents is not held accountable to any real standards of truth telling. His work, therefore, is not interested in representing the truth of an image, or it’s inherent, objective emotional content. He has gone so far as to say he does not consider himself a documentary photographer because he “[does] not feel associated with people and their problems every day.”

That is not to say, however, that Eggleston is not interested in people. He uses what he calls a “democratic” approach to all portraits, his friends, his family, strangers on the street. He searches not for personal connection (presented with a photograph he took of his young son, Eggleston said he was not interested in ideas of family, fatherhood, or childhood, but instead “something more ambiguous”), but for the intricate detail and texture of the world in which he lives. In response to curator Phillip Prodger’s question, “Have you ever felt like there are so many things to see her in Memphis, if only people could look at it a certain way?” Eggleston confirmed, “that nothing is more interesting than what’s around us.” He had a special, almost Dadaist way of making the extraordinary out of the ordinary, of elevating everyday moments through the choice of recording them.

Meaning in Eggleston’s images can be opaque, but that’s part of their appeal. As Prodger concludes in his essay, the beauty in Eggleston’s photographs’ comes from the fact that they “are determinedly incomplete, resisting all attempts at tidy resolution.”

October 26, 4-6PM
Signing at The Strand
828 Broadway, New York
This event is ticketed. 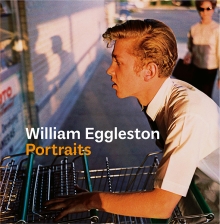