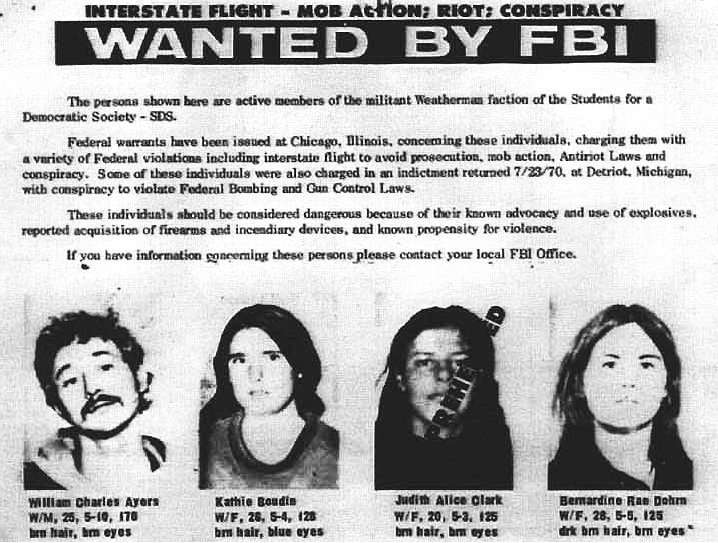 Image above is the official FBI wanted posted for the leaders of Weatherman; used with permission.

Weatherman—the Weather Underground Organization—was the most famous group of young people committed to revolutionary violence to emerge out of the late 1960s. In protest of American racism and the Vietnam War, they detonated more than two dozen dynamite bombs between 1970 and 1975, and hit some spectacular targets, including the Pentagon, the State Department, and the U.S. Capitol Building. For years, leaders of the group such as Bill Ayers, Bernardine Dorhn, and Mark Rudd appeared on FBI wanted posters in every post office in the country. The charges that the federal government brought against Weatherman carried scores of years in prison as penalties. Weatherman’s outlaw legend has endured to this day—surfacing, for instance, in a 2002 documentary that was nominated for an Academy Award, and in the 2012 feature The Company You Keep, starring Robert Redford as a Weatherman veteran haunted by his past and Julie Christie as a Weatherman veteran still committed to revolution.

Yet the Weather Underground group really was minuscule in size (about 100 guerrillas, with about 200 direct supporters), and it was very young; most people were in their early twenties, and the leaders only in their mid-twenties. Many were college-educated, but the underground was an amateur military operation. For its part, the FBI devoted tens of millions of dollars and tens of thousands of man-hours to attempts to capture the Weathermen and to stop their bombings. And yet the FBI failed. No Weatherman leader was ever caught; no Weather Underground bombing was ever blocked. How could this be?

To begin with, the myth of the FBI especially on the left—that it was all-powerful and all-knowing—is greater than the facts. In 1970, the FBI was not very large: it had about 8,000 special agents to deal with 220 million people. And it had never faced a truly revolutionary situation as appeared to exist in the divided America of 1970. It was riddled with factional in-fighting over who was to succeed a rapidly aging J. Edgar Hoover as director. The men conducting the search for the Weather Underground were mostly veterans of World War II who didn’t understand the New Left. Because FBI agents had to dress like businessmen at J. Edgar Hoover’s decree, the Bureau had to depend on civilian informants to penetrate the Movement; but when Weatherman went underground in early 1970 and broke up into small units whose members had known each other for years, there were no civilian informants to be had. FBI surveillance of friends and relatives of the Weathermen led nowhere. Thus, after March 1970, the FBI knew literally nothing about the internal doings of Weatherman except what Weatherman’s own occasional communiqués reported.

Moreover, forensic analysis of bomb-components and the nature of bombing-scenes was in its infancy; this hampered the search for clues. Computer analysis was also in its infancy, and the computers in Washington headquarters were primitive by our standards. In addition, while Weatherman was an obsession of FBI headquarters (which was under enormous pressure about Weatherman from President Nixon personally), local Special Agents in Charge were reluctant to commit the resources to Weatherman that the center demanded. This was because these agents’ own promotions depended on the number of arrests and convictions they accumulated; and they soon realized that efforts against Weatherman were time-consuming, resource-consuming, and likely fruitless. In the meantime, with crime on the rise in the country, there were many other criminal developments that needed the agents’ attention. In short, the center actually faced resistance in the Weatherman hunt from the local agents. Desperate for information, Washington headquarters resorted to ordering burglaries and wiretaps of friends and relatives of the Weathermen without court order; these were people who had done nothing illegal, so no judge would approve such actions. This program began under Hoover and increased under his successor L. Patrick Gray, an agent of the Nixon White House and its obsessions, and an anti-New Left fanatic himself. And when this program was discovered in late 1973 during the Watergate scandal, all the serious Federal charges against the Weather leadership had to be dropped because of government malfeasance.

The Weather Underground itself operated with several advantages. The first is that they refrained from killing. In early 1970 the leaders did plan bombing operations that would have killed dozens of American citizens (in Berkeley, in New York/New Jersey, and in Detroit); but in May 1970 they decided to restrict their attacks to property destruction alone. This decision was crucial to the longevity of the group. It came partly in shocked response to an accidental explosion in which three Weatherman leaders blew themselves up. But another factor was that Weatherman was not simply a bunch of crazy young hotheads. The group operated with a version of Marxist-Leninist political theory and possessed a political constituency. And this constituency consisted primarily of politicized hippies who were opposed to extreme violence (such as the Vietnam War). These supporters made it clear in the countercultural press that if Weatherman engaged in lethal operations the group would have no support. Friends of Weatherman have said to me that if the group had killed, they themselves would have turned them in to the police. But because the Weather Underground harmed no human beings, they found a significant network of supporters who provided refuge, hiding places, and moral and logistical support. While it is wrong to speak of “moderation” in a Weatherman context, the limits Weatherman placed upon its own behavior helped to ensure the group’s longevity.

Another factor that played in Weatherman’s favor was that they operated in an American environment where it was easy to hide under false identities and set up operations. Many states in 1970 did not have driving licenses with pictures on them, making false papers easy to create. Dynamite stores in Colorado and New Hampshire required little or no identification; one could simply walk in and purchase dynamite. Guns were easy to get—although by mid-1971 few Weathermen were carrying guns. Weatherman communicated using countless public telephone booths; there were no personal cell phones to monitor. Employment was easy to obtain, so members of Weatherman could support themselves. And it was easy to place bombs in buildings because metal detectors did not yet exist at the entrances of buildings. America in the 1970s was simply not the surveillance-state that exists today.

The Weatherman members were nothing if not careful. The FBI complained that the aboveground supporters of Weatherman were so paranoid about surveillance that it was hard to conduct surveillance on them; the actual Weather guerrillas, operating under assumed names and holding normal jobs, were even more cautious. And there were so few of them that they were hard to find in a huge country.  Further, they didn’t actually do much damage. Although they detonated 25 dynamite bombs between 1970 and 1975, half of those bombings occurred in 1970 alone; thereafter, Weatherman averaged only about one bombing every six months. During the long periods of quiet, Weatherman members went about their normal working-class or countercultural lives. The infrequency of Weatherman bombings stands in stark contrast to the wanted posters. Weatherman’s ideology proclaimed revolution, and their communiqués were often vitriolic, but you weren’t going to start a revolution with a bomb in a bathroom once every six months.  On the Weatherman side, too, the myth was greater than the facts.

What does the Weatherman evasion mean to us today? For those who believe that the sixties upheaval we call the Movement was ultimately a failure, there is a need to find a reason for the failure, and some have concluded that Weatherman fits that bill. They say that it divided and then destroyed SDS through its fanaticism, it undermined the reputation of the anti-war movement by its violence, and it never exerted influence on the problems of racism and the Vietnam War which were its main targets. In short, Weatherman teaches that ideological fanaticism is a dead end.

But many in my generation believe (as I do) that the Movement was ultimately a success—both politically in the short term, in helping to end the Vietnam War and abolish the draft, but also culturally in the long term. Among other things, it produced a society of increased personal freedom and choice, black rights, women’s rights, Hispanic rights, gay rights, and a focus on ecology. Within such a framework of ultimate success, Weatherman in its active phase does not matter very much. In fact, what is more interesting is the post-Weather history of the people involved in the group. Those who had proclaimed in 1970 that they would never live in peace in American society have been living in peace in American society since the late 1970s for almost 40 years—without giving up most of their left-wing ideals.

It is not destruction, but reconciliation (however reluctant) and productive lives that stands out in that part of the story, and conversely, the resilient ability of a democratic society and culture to absorb criticism and to change.

Arthur Eckstein is professor of history and distinguished university professor at the University of Maryland, College Park. He did his graduate work in Berkeley in the late 1960s and early 1970s. He lives in Greenbelt, MD. 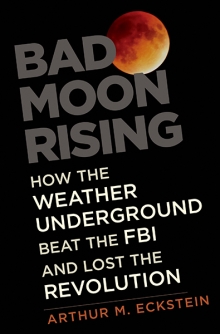