Signing of the Constitution by Howard Chandler Christy (1940), public domain

In the dark years of World War II and the Cold War, Americans invented a national mythology that we hold dear to this day: the myth of the “American Enlightenment.” Like a bomb shelter made of ideas rather than concrete, the American Enlightenment (capital A, capital E) spun a tale about a golden era of freedom and democracy that attended the birth of the nation in 1776. This comforting idea emerged amid rising American anxieties about the Soviet Union and the terrifying “isms” that the twentieth century had already inflicted on Europe: communism, totalitarianism, fascism. In response to these ominous threats abroad, mid-twentieth-century Americans hearkened to an idealized vision of the American Revolution, which they cast as an ideological bulwark that could shield Americans not just in 1776, but in 1976.

The myth makers came from a broad swath of American society: they were journalists, historians, artists, and politicians. Among the most influential was the historian Adrienne Koch, who published the first book ever to be titled The American Enlightenment (1965). Koch singled out those she called the “Big Five” founders—John Adams, Benjamin Franklin, Thomas Jefferson, Alexander Hamilton, and James Madison—for embodying what she called the “vision” and “spirit” that still undergirded the “free society” and “democratic civilization” of twentieth-century America. For Koch, the political drama of the American Revolution formed the center of this new, mythical era she was calling the American Enlightenment. She argued publicly that Enlightenment ideals remained of the utmost relevance in the mid-twentieth century. We should appreciate our American Enlightenment, she seemed to say, the way we appreciate vaccines and other modern wonders that protect us from very bad things like viruses and communists.

By the era of the American bicentennial, theory had congealed into fact. In 1976 and 1977, no fewer than three books appeared that confidently assured readers that there had been an American Enlightenment, and, moreover, that it was most clearly embodied—in fact it was realized—during the political struggles of the American Revolution.

These bicentennial books also popularized a second feature of the myth of the “American Enlightenment”: diffusionism. The diffusionist theory of the American Enlightenment held that its major ideas were hatched in Europe, especially in France, in the minds of airy philosophers like Voltaire. These abstract ideas had then traveled like immigrants to America, where they were forged into real, hard facts by pragmatic American revolutionaries. As the historian Henry Steele Commager put it in his book The Empire of Reason (1977), the Old World “imagined, invented, and formulated” the Enlightenment; the New World “realized it and fulfilled it.”

We should care about this modern myth because this triumphal, nationalistic, and politicized narrative of an American Enlightenment obscures the reality of the eighteenth century by holding people in the eighteenth century to our own modern standards of what counts as enlightenment. If we listen to the voices of eighteenth-century Americans themselves, we discover that they never talked about something so grand and triumphal as the “American Enlightenment,” a shining bauble of national greatness whose truths shine forth undimmed today. Instead, they talked about their elusive, never-completed quest to become “enlightened” (small e).

What did it mean to be “enlightened” in eighteenth-century America? Two things mainly. First, people who hoped to become enlightened believed that human reason rather than superstition and biblical revelation would help them to understand the world around them. Second, they believed that instead of getting worse, as the biblical narrative of the fall from Eden announced, human societies were in fact constantly getting better. These eighteenth-century people were the first people in the history of the world to believe that human reason would lead to what they called progress.

But here’s the takeaway: none of these Americans thought that enlightenment had ever been achieved. Instead, they saw it as a constant process: ongoing, upward, never ending. Where we see an era—an admirable thing that is already done—the people who lived in the eighteenth century saw a process, never completed because human reason was always fallible. They were never sure exactly whether enlightenment had been achieved; there was always room for improvement. They were the most hopeful and optimistic people in the history of the world, but also highly uncertain and questioning about their own abilities to achieve perfection.

Caroline Winterer is Anthony P. Meier Family Professor in the Humanities at Stanford University and director of the Stanford Humanities Center. The author of three previous books, she received an American Ingenuity Award from the Smithsonian Institution. 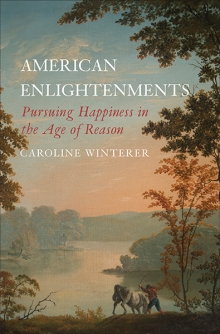