In 2010, Gary Hufbauer and I published Globalization at Risk, our fierce defense of the open trading system that, many feared, would be reversed amid the economic angst of the 2008-09 Great Recession. Drawing on countless empirical studies, we showed that cross-border trade and investment have critically helped generate economic growth, reduce poverty, and transform backward developing countries into booming emerging markets.

Fortunately, a turn to protectionism that marked the aftermath of the Great Depression did not happen in 2010: the system largely held, thanks to countless of policymakers, business leaders, and academics who stood in its defense.

As the American presidential election approaches, globalization and trade seem again to be at risk. Shackled by economic cooling and slowdown in liberalization, trade has grown more slowly after 2008 than any time since the recession of the early 1980s. The multilateral Doha Round is dead, the Trans-Pacific Partnership is mired in the electoral jostling, the Trans-Atlantic Trade and Investment partnership talks are on ice, and Candidate Donald Trump is out to sabotage our consumers and companies through tariff hikes on three of our most important trading partners – a policy that is especially destructive to America’s poor.

So much is known about the immense benefits of imports to American consumers, companies, and economy; the positive impact of trade on incomes and jobs; the foolishness of deploying tariffs to combat trade deficits; the fact that technological change not trade is the main driver of job losses over the past decades; and the key role that open trade relations play in cementing our alliances and keeping foreign markets open to our businesses, that it is hard to believe we are still slandering trade in America.

Our next president can readily draw on the voluminous and irrefutable empirical evidence backing up these points – and get further ammunition from the following:

The best way to ensure free as well as fair trade is through trade agreements. Agreements such as TPP not only open markets for U.S. companies; they are the best of tools to address precisely the grievances their opponents tend to have. They bar distortive export subsidies, IP theft, unfair advantages enjoyed by state-owned companies, and policies that force U.S. companies to locate production or computing facilities on a trading partner’s soil as a precondition for market access. Trade agreements guarantee fair trade – if they are ratified.

Trade restrictions are an insult to Americans. While exports are easy to embrace, imports are the real growth driver. Imports have made each U.S. household $10,000 richer each year by enabling our consumers and companies buy a wider range of products, inputs and services at a lower cost, and by forcing our companies to become more efficient and offer better prices. Herein also lies the moral case for trade. No-one has forced American consumers or companies to buy foreign goods or services: they have chosen to, and done so even if each day hearing about the supposedly devastating impacts of trade on American jobs. Trade is nothing but a mutually beneficial exchange among a willing buyer and seller. Prohibiting Americans from engaging in this exchange violates their express desires. We need to champion not only free trade, and freedom to trade.

Small online sellers are the new face of American trade, and trade promotion must support them. Cross-border ecommerce is growing five times faster than regular trade. The ecommerce opportunity is enormous for U.S. sellers: 6.1 billion people will by 2020 have smartphones with which to get online and shop. These include 100 million well-off Chinese Millennial shoppers, the 500 million Europeans who already spend $500 billion online, hundreds of millions of Indian online shoppers in 3,000 cities, and the tens of millions of Brazilians whose ecommerce purchases have grown 45-fold in the past 15 years, with 40 percent made from overseas. Add to this businesses in foreign markets – B2B online sales are ten times greater than B2C.

Enabling buyers to find sellers anywhere in the world them, ecommerce undoes the geographic distance that has kept buyers blind to far-flung sellers for centuries. Indeed, 97 percent of American micro and small businesses that sell on eBay export, as opposed to the 1 percent of brick-and-mortar U.S. businesses that export. These micro-multinationals export to an average 18 markets, as opposed to the traditional exporters that sell to 1-2 foreign markets, usually Mexico and/or Canada.

We need to buttress these trailblazing small businesses with capabilities and capital: simplify customs procedures for low-value items worldwide through a plurilateral agreement on de minimis, create a Trusted eTrader program to streamline customs compliance for complaint small sellers, guarantee small export working capital loans issued not by the slow-moving banks, but by online lenders, and ensure that online payments systems are available to buyers globally and interoperate – so that a willing buyer of U.S. products, say, in South Africa can instantly and safely pay the U.S. seller online.

A trade digitizes, we need global code of conduct for digital trade. When hearing “trade”, most people think of containers sailing across oceans. But trade of the 21st century is video content from American entertainment companies like Netflix streamed around the planet; 3D printable designs Made in America shipped on the cloud; IT, architectural, legal, data, and other services sold by American law firms, architects, engineers, accountants and solo entrepreneurs, including on microwork platforms like Upwork; and consumer, point of sale, and operational data imported by American multinationals and small businesses from around the world to improve their services and products.

In the 1990s, good policy – deep tariff cuts and removal of stringent restrictions on foreign investment in the emerging and post-communist world – helped American companies enter markets worldwide. The global digital economy has no equivalent. Instead, policy is adrift, and digital protectionism is on the rise, denting America’s comparative advantage in things digital. The low-hanging fruits are the 23-member Trade in Services Agreement (TiSA) aimed to keeping market open for American service providers and freeing cross-border flows of data, and TPP, which has a gold-standard chapter helping to protecting U.S. companies in digital trade. But these deals, when ratified, are not enough – a global deal is needed to encompass also China, India, Brazil, Russia and others that sport problematic policies around digital trade. The first step is to create a Washington Consensus-type set of global codes of conduct, perhaps called the Seoul Consensus to celebrate Korea’s ascent in the global digital economy, to guide nations’ behavior in the digital era and keep misbehaving governments’ feet to the fire.

Digital education policy is the cornerstone of our trade policy.  Job-creation in the 21st century is not about sealing ourselves from the world, but about putting in place education and training policies that build workers’ skills for winning in the global digital economy. Technology is the great extender: those that know how to leverage software, big data, cloud computing, ecommerce, and other technologies make more of their hours and talents – growing more productive and earning higher wages. All Americans need to have a shot at that. Secretary Clinton’s policy initiative on technology and innovation, if coupled with rigorous selection, incentives, and accountability systems of computer science and STEM teachers in schools, appears to be a step in right direction.

Technology can also eradicate the persistent frictions in labor markets. For example, artificial intelligence applications can match workers to the best-fit jobs where their skills and talents most shine.

I had the honor to share the stage with UK’s Secretary of State for International Trade Liam Fox at the WTO a few weeks ago. He gave the most enlightened speech about trade I have ever heard by a trade policymaker – see 10 minutes into this video. There is no reason why the next leader of the free world could not do the same – and do right by the tens of millions of American business owners, workers, and shoppers who thrive each day because of the open trade regime her predecessors have doggedly built.

Kati Suominen is Founder and CEO of Nextrade Group, Founder and Chairwoman of the Trade Capital Fund, and Adjunct Professor at the Anderson School of Management. She is finalizing her 10th book, Revolutionizing World Trade: How Disruptive Technologies Open Opportunity for All. 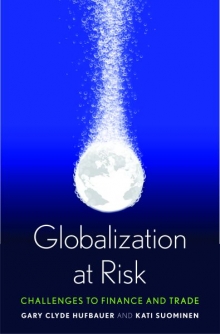