I recently wrote a book titled Essential Type: An Illustrated Guide to Understanding and Using Fonts. When I started the book I assumed, as one does with any writing project, that there would be difficulties of various sorts along the way, but I didn’t figure on there being any surprises within the “Type Terms” chapter. I thought that, after over twenty five years as a designer, I knew what was what. I was wrong!

Some type terminology is pretty much set in lead (seems more appropriate to say lead rather than stone in the context of this post). A measure is a column width, a gutter is the gap between columns, leading (or line feed) is the distance in points from one baseline to another—I could go on, but it will be best, I think, if you read the book (hint hint). However, when I looked through the numerous sources I was employing to double-check the accuracy of my own definitions I was mightily surprised to discover the discrepancies between definitions of two specific terms: widows and orphans.

Some say that a widow is the first line of a paragraph isolated on its own at the bottom of a column, while some say it’s a line on its own at the top of the next column or page. Others say that these are actually orphans, whilst a widow is a single word on its own at the end of a paragraph that can appear anywhere in a run of text. I’ve seen other cases where the words orphan and widow are given more-or-less identical definitions in the same publication, thus rendering the words interchangeable. This last characterization is probably the most accurate in terms of global usage—if a designer refers to either a widow or an orphan when looking at a piece of typesetting, another designer will know what is meant regardless of their personal lexicon.

Historically I’ve used the word widow to refer generically to any short or isolated line of text, as in, “Oh dear, I must sort all those widows out before I send this layout to the client.” Having tested this out on as many passing designers as I could muster (three, actually… I freelance from a home office so colleagues are fairly thin on the ground), it appears that I’m not alone, and the term widow seems to be more popular than orphan. However, my current position on the official definition of each is that an orphan is an overly short line of text at the end of a paragraph, or a single line stranded at the base of a column, while a widow is a single line of text that’s been pushed to the top of a column, isolating it from the rest of its paragraph at the base of the previous column or page. This is based on the majority view from all the sources I could find on the subject.

One problem remains. I have an awful suspicion that I may have defined these terms differently in the past, and that these abandoned definitions might have found their way into one of my earlier books. I’m not going to check, just in case…

Tony Seddon is a freelance designer, art director, and writer living in the UK. He specializes in book design and design for print, and his published work includes Graphic Design for Nondesigners (2009), 20th-Century Design (2014), and The Evolution of Type (2015). 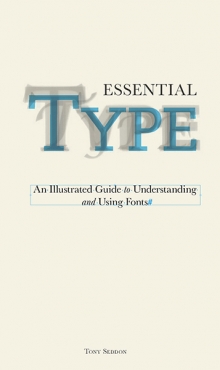