In our “sour little age,” as playwright Tony Kushner once called the world we live in, lines from a law passed fifty years ago this weekend offer welcome uplift.  “The spirit and direction of the Nation are founded upon and reflected in its historic heritage,” declared the National Historic Preservation Act, signed into law by President Lyndon Johnson on October 15, 1966.  “The historical and cultural foundations of the Nation should be preserved as a living part of our community life.”

The 1966 preservation act – which created the National Register of Historic Places, state preservation offices, standards for rehabilitation, and a place at the table for preservation when massive federal projects threaten historic places — deserves its share of credit for making our nation more livable. A majority of Americans travel to at least one historic site each year. The rest are the unwitting daily beneficiaries of cities and towns with historic landmarks, row upon row of row houses, colorful Victorians, reused factory buildings, not to mention sites of civil rights battles, Japanese internment camps, and the dwellings of enslaved people.   The preservation movement spurred a return to the city, and a new appreciation of the continuing power of dense, walkable neighborhoods, that is the foundation of a vibrant community. It is an impressive legacy.

The greatest wave of immigration to the United States — exceeding even the epic migrations of the late nineteenth century — was only just beginning in 1966. Millions of Asian and Latin American migrants have since joined the American polity, and they are rightly demanding their place at the table–and in the national story.

To help create greater unity in a stunningly diverse nation of immigrants, the preservation movement must bring Americans face to face with the legacies of their controversial pasts — at places like the Tenement Museum in New York City, the Manzanar Japanese-American internment camp, and the slave trading markets of Shockoe Bottom, New Orleans. One of the most exciting developments in historic preservation in the past quarter century has been the growing interest in understanding the pain that inheres in difficult places, places of suffering and national disgrace, and what have been called “sites of conscience.”

The early environmental movements were focused on the destruction of the natural environment—belching smokestacks, toxic dumps, pesticides. But big cars and thirty-cents-a-gallon gas were the norm, and virtually no one was thinking about what we might be doing to the earth’s atmosphere, or recognizing that the effects of policies would be felt within a few short decades. Preservation was concerned with beauty in buildings, not an unknown problem that would come to called climate change.

Saving historic places and reusing them must be a cornerstone of today’s environmental sustainability efforts. Nearly half of all greenhouse gases are produced in the construction, demolition, and operation of commercial and residential buildings.  Forget those alluring “LEED Platinum” buildings.  We will not build our way out of this mess; we can only preserve our way out of it.  But for the preservation movement to fully embrace its role in the fight against global warming, it must jettison a conservator’s approach to old places. We need to save and reuse even ordinary old buildings because demolishing and replacing them contributes to our carbon footprint.

Economic inequality in 1966 was in decline, the product of postwar economic growth, strong unions, and President Lyndon Johnson’s War on Poverty policies. No one would have predicted that fifty years later inequality would be as great as during the rapacious Gilded Age of the late nineteenth century, and that neoliberal economic policies would be enthroned, despite all evidence of their destructive effects.

The preservation of movement of the next fifty years cannot be a tool for gentrifiers but a means of achieving economically just communities. This means preserving public housing embracing new forms of property ownership such as community land trusts and cooperative housing as a way to protect against the dislocations of market-based private investment. It means passing local ordinances such as the one in San Francisco that helps support longstanding community businesses.  And it means putting the “movement” back in the preservation movement by taking to the streets to protest the displacement of our neighbors.

This is preservation’s moment. The movement can finally free itself from the stigma of being aesthetically elitist, of being the domain of the rich, of standing in the way of progress, of being obsessed with architecture. And it can find itself offering solutions to some of the most pressing problems of our world–crafting a sustainable approach to climate change, honestly confronting our difficult pasts, and reclaiming a more equitable society.

Max Page is a Professor of Architecture and History at the University of Massachusetts Amherst and author of Why Preservation Matters (Yale, 2016) and co-editor (with Marla Miller) of Bending the Future:  50 Ideas for the Next 50 Years of Historic Preservation (UMass, 2016). 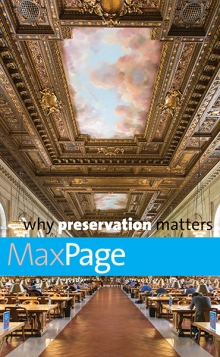