Photograph of St. Peter's Square in Rome by Dennis Jarvis, used with permission.

In 1749, a young Jewish girl of Rome, the eighteen-year-old Anna del Monte, was kidnapped and taken to the Catecumeni, the Roman House of Converts. She had been accused of expressing a desire to convert to Catholicism by one Sabato Cohen, who had himself converted in the hopes of marrying Anna and acquiring her large dowry (her family was part of the thin upper crust of the Roman ghetto). In the Catecumeni, Anna endured enormous pressure for thirteen days, but she refused to convert and was eventually released. Many others had given in. Anna had written notes about the experience in her diary, which her brother Tranquillo then published as a moving protest against the absurdity of the Roman Jewish condition. Tranquillo circulated this text in 1793, years after his sister’s death in about 1779. This was also two years after the Jews of France had been granted rights as full citizens, and seven years after the ratification of the United States Constitution.

On the other side of the Atlantic, George Washington wrote to the Jews of Newport, Rhode Island, that “the state demands no more of you than that you observe the law.” Observing the law, reading Washington backward, creates the citizen. This was revolutionary. Washington said nothing about religion, confession, or belief. Previously, in all states, the rule had been that full citizenship required “regeneration,” or rebirth through baptism. Only a Christian could lay claim to complete rights. Washington was implying that observance of law by itself regenerated the person, integrating them into the body politic. The motto e pluribus unum inscribed on American money embodies the great transformation. Since the time of St. Paul, Christianity had sought oneness and unity through faith and baptism. Paul had spoken of “the single bread, though we are many.” The history of Christianity over the centuries reveals how intently the Catholic Church and then the Protestant world, too, in its own way, had sought to realize this ideal. One spoke of the corpus Christianorum, the body of Christians.

Jews were excluded from this body. They were also a source of anxiety; it was believed that through their actions, they would contaminate the “body of the faithful.” Should a Jew participate in Christian rites, said the Christianized Justinianic Code of Roman Law from the sixth century, those rites would lose their efficacy. To prevent this from happening, a body of law grew up aimed at segregating Jews. The culmination of that segregation was the ghettos of early modern Italy. The first was Venice in 1516, but the real era of the ghetto began in Rome in 1555. Moved by a belief that the End of Days was upon him, Pope Paul IV was convinced that forced to live apart, the very Jews who had lived openly in Rome since the times of Julius Caesar and before would succumb to pressure and convert. Purity of the faithful would be achieved by the purgation of the potential source of “infection” or “contamination.”

The Roman ghetto endured until 1870. It ended only because its enforcer, the Papal State, was itself dismantled with the founding of the modern Italian monarchy. The two events occurred on the same day: September 20. What made ghetto life absurd, however, as Tranquillo del Monte pointed out, was not the conversionary pressure itself, but that this pressure could be applied—legally, one must emphasize, not arbitrarily, the legality making it all the more fearful—at the moment when the rest of the Western European Jewish world was undergoing a seismic transformation.

Roman Jews knew what was going on around them. They saw their fellows in England and Holland inching closer to full reception in society as they acquired ever more expansive rights, to the point that de facto—I emphasize de facto—there was little difference between them and Christian denizens of the realm. In the United States, there were no differences at all. In France, there were many problems, but the direction toward equality was clear. The French Revolution preached and legislated equality for all. Granting equality to Jews, those who had perennially symbolized the inequality and distorted corporate structure of the pre-Revolutionary state, signified that equality in law (practice took decades to catch up) could function only when it was universal.

The French Revolution by itself did not fully resolve the issue. Instead, resolution was reached in 1804 when the Napoleonic Code, the basis of all modern European law, annulled all previous laws with their distinct Christian bias. It is this Code that is the foundation of militant French secularism. In Rome, the authorities, all ecclesiastic, continued to behave even in the 1820s the same way they did with Anna del Monte in 1749. The root of the problem was the venerable principle of favor fidei: the good of the faith stood supreme. Pope Pius XII in 1946 was still claiming that the state should not take precedence over the Catholic Church in matters relating to marriage.

Yet there was an internal contradiction. By virtue of the same Roman Law, then known as ius commune, that for the sake of the faith condemned them to second class status, Roman Jews were considered to enjoy full civic rights, in fact as well as theory. This contradiction was insuperable and brings us back to George Washington. If religion were written out of law, precisely as Washington implies, and Napoleon decreed, then Jews ipso facto would become full citizens. The story of Anna del Monte would not—could not—be repeated.

Nor can we see this only in hindsight. Christian lawyers who defended Jews were saying it in as many words. To rest on the favor of the faith is papal arrogance, one argued. Why should civil law not take precedence over the law of religion? This is a conundrum we have yet to resolve, even in the United States of the twenty-first century. Has the full separation of church and state, so patent in the words of Washington, and even more James Madison, been achieved? The history of the Jews of Rome in the eighteenth century demonstrates in black and white what happens when it is not. It shows also that one can be deluded. Increased rights like those achieved by Jews in western Europe before 1791 are not the same as full rights, especially when the latter are guaranteed by law—and implemented in practice.

Kenneth Stow is the author of Theater of Acculturation and Alienated Minority and founding editor of the journal Jewish History. He is currently a research associate in the Department of History, Smith College, and emeritus professor, University of Haifa, Israel. He lives in Haifa and Leeds, MA. 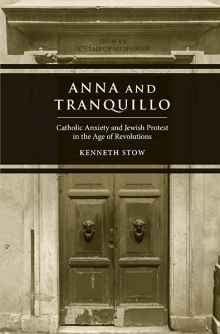