In Elisabeth de Bièvre’s book Dutch Art and Urban Culture, 1200-1700, the author explains how distinct geographical circumstances and histories shaped unique urban developments in different locations in the Netherlands and, in turn, fundamentally informed the art and visual culture of individual cities. In seven chapters, each devoted to a city, the book follows the growth of Amsterdam, Delft, Dordrecht, Haarlem, Leiden, The Hague, and Utrecht over the course of five centuries. By embracing the full gamut of art and architecture and by drawing on the records of town histories and the writings of contemporary travelers, de Bièvre traces the process by which the visual culture of the Netherlands emerged to become the richest, most complex material expression in Europe, capturing the values of individuals, corporate entities, and whole cities.  In this series of posts — now complete! — de Bièvre offers a snapshot of each of these seven cities as expressed through a set of representative artworks.

Check out the previous six posts, on Amsterdam, The Hague, Dordrecht, Haarlem, Delft, and Leiden.

In the first century C.E. the Romans established a military camp, Trajectum, on the river Rhine about 50 km east of the North Sea. By the 8th century this settlement had become Utrecht (Ultra Trajectum), the capital of a new bishopric of the same name. Covering roughly the territory of the present day Netherlands, it included the area, which became the county and later the province of Holland. Utrecht received city rights in 1122, not least thanks to its architectural wealth including a cathedral (started c. 700), five large churches, a castle, royal apartments and many big, fortified town houses. Their imposing presence is reflected on contemporary city seals.

The city’s role as both the ecclesiastical and civic center of an extended and prosperous region was not only demonstrated by its architecture, but came out on many artistic levels, as in sculpture, illustrated manuscripts and other luxurious objects produced in precious metal.

In the illumination with the penitent King David, the tower of Utrecht cathedral in the background suggests that the biblical protagonist could be identified with David of Burgundy, the Utrecht bishop at the time. Figures in the margins evoke reasons for his repentance. Two grizzly bears under attack by aggressive bees for stealing their honey may refer to a similar unpleasant fate awaiting David for desiring illicitly the sweetness of girls like the one behind him, dressed in her gorgeous hair only. Images of nudes had been unusual in the Netherlands, but became leitmotivs in Utrecht’s artistic culture. First articulated by Jan Gossaert for David’s half brother, Bishop Philip, known as ‘the youngest Bastard of Burgundy’, the sensual bodies of the Olympian gods and heroes in the nude became imprinted on the Utrecht scale of aesthetic values.

A group of Utrecht-based painters elaborated these preferences far into the seventeenth century, directing their work to aristocratic clients. Many of these were living on unearned incomes related to former church privileges.  They were interested in unproblematic subjects inspired by pleasurable, leisure activities, which–far removed from daily toils–were reflecting their elevated social status. Others belonged to the circle of the new sovereigns, the Princes of Orange, who themselves aspired to royal status.

Although the long-established ecclesiastical elites had become more sober under the influence of Calvinism, they still expected a sensuality in their religious imagery similar to that which they loved in their classical subjects. Gerard van Honthorst fulfilled these dreams as his St Sebastian shows. The saint’s exquisite body and beatified face invite the viewer to embrace martyrdom. 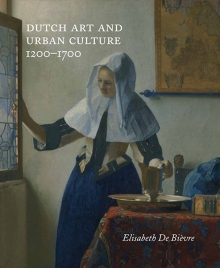