Image above is a photograph of Philadelphia's Eastern State Penitentiary by Sakeeb Sabakka, used with permission.

Arthur Johnson, sixty-four, has spent thirty-seven years in solitary confinement, locked in a cell no bigger than a wheelchair-accessible bathroom stall. He is living his fourth decade without once having shared a meal—or even a handshake—with another human being. Astonishingly, Johnson has committed only three extraordinarily minor disciplinary violations (rolling up a magazine, possessing a multi-vitamin, and using a sheet to block cold air from blowing on him) in the past twenty-five years. Just a few weeks ago, in September of 2016, a judge ordered the Pennsylvania Department of Corrections to release Johnson from solitary confinement. Johnson’s case may sound extreme—in terms of the years he has spent in isolation, the harshness of the conditions of his confinement, and the judicial attention he has recently received. But his story is disturbingly common.

Arthur Johnson entered the Pennsylvania prison system in 1973. He had received a sentence of life without the possibility of parole (“LWOP”) for a homicide stemming from a gang fight. Johnson was eighteen at the time of the crime. Today, almost 50,000 prisoners across the United States have LWOP sentences. More than 2,000 were under eighteen at the time of their crime, and states have only recently began to reconsider whether human brains are fully developed at seventeen or eighteen, and whether kids of that age should be eligible for such long sentences.

Although Johnson had just turned eighteen when he was charged with murder, he was a grade school dropout, with an IQ between sixty-three and seventy, evidence of serious intellectual disability. In a challenge to his conviction filed in the 1970s, Johnson argued that police coerced him into confessing over a long interrogation, and that he did not fully understand what he had confessed to doing. (Philadelphia police elicited dozens of false confessions in this era.) Nonetheless, the Pennsylvania Supreme Court affirmed Johnson’s conviction and LWOP sentence in 1976. Perhaps he lost hope at that point.

In December of 1979, Johnson, who had joined a black liberation movement in prison, participated in a violent escape attempt from Pennsylvania’s State Correctional Institutional in Pittsburgh. Prisoners bound and gagged one correctional officer and locked him in his cell. Johnson carried two loaded zip guns. (He had a life without parole sentence; what did he have to lose?) Prison officials caught Johnson before he escaped. No one was physically hurt in the whole escapade, but prison officials quickly locked Johnson up in Pennsylvania’s “Restricted Housing Unit”—a euphemism for solitary confinement. Johnson was 27.

Just as Johnson’s young age and long prison sentence were not unusual, neither was his path into solitary confinement. Many prisoners across the United States ended up “locked up” and “locked down” in solitary confinement over the course of the 1970s. Many, like Arthur Johnson in Pennsylvania, George Jackson in California, and the hundreds of prisoners who revolted at Attica, were accused of radical political organizing, attempting to escape from prison, and otherwise challenging the legitimacy of prison order. Like Johnson, many of these prisoners and their compatriots remained locked up for decades, at the mercy of prison officials who labeled them as dangerous and refused to reconsider their assessments. And like Johnson, many of these prisoners had no hope of ever being released, because of their life without parole sentences. (For instance, in California alone, as of 2015, 130 prisoners in long-term solitary confinement had life without parole sentences for crimes they committed as juveniles.)

Since 1979, Johnson has spent no more than one hour of every weekday out of his cell, in a fenced, outdoor cage, alone. He is strip-searched before and after this outdoor exercise. His cell doors are made of solid steel, preventing him from seeing or hearing other prisoners. Any visits have been through partitions, with no human touch. Tens of thousands of prisoners across the United States endure harsh conditions of confinement like this for months, years, and decades on end. No national level data is available about average lengths of stay in these kinds of conditions, but in California alone, 500 prisoners who had been in solitary confinement for more than 10 years recently brought a class action case to challenge the conditions and durations of their confinement. California prison officials agreed to reconsider their claim that all these prisoners were too dangerous to live in a general prison population and promised to transition all 500 prisoners out of solitary confinement.

In May of 2016, following on the heels of the California lawsuit, Bret Grote, an attorney with the Abolitionist Law Center in Pennsylvania, partnered with the international firm Jones Day to file a complaint on behalf of Arthur Johnson. Bret Grote is thirty-four years old. Arthur Johnson has been in solitary confinement longer than Grote has been alive.

Grote’s complaint alleged that Johnson’s constitutional rights had been violated. First, Johnson had a right to be free from cruel and unusual punishment (under the Eighth Amendment), and his ongoing harsh conditions of confinement violated this right. In a testimony at an evidentiary hearing assessing this complaint, Dr. Craig Haney testified that “Johnson’s ‘pervasive isolation’ has led to cognitive impairment, chronic depression, emotional pain and suffering, and other psychological harms.” Second, Johnson had a right to due process (under the Fourteenth Amendment), and prison officials’ refusal to provide Johnson with an opportunity to improve or relax his conditions in continuous solitary confinement violated this right. Haney testified about the injustice of this lack of due process, too: “Whatever justification the Pennsylvania DOC may have had for placing Mr. Johnson in isolation in the distant past, his longstanding nonviolent prison record and his increasing age provide ample evidence that those justifications no longer exist.”

Judge Christopher Conner agreed with Grote and Haney and ordered Johnson released. This, too, follows a pattern repeating across the United States: prison officials, legislators, and judges are reconsidering the practice of long-term solitary confinement. The question is whether these reforms will be sustainable in light of the pervasive and persistent practice of solitary confinement across the United States.

Keramet Reiter, an assistant professor in the Department of Criminology, Law and Society and at the School of Law at the University of California, Irvine, has been an associate at Human Rights Watch and testified about the impacts of solitary confinement before state and federal legislators. She lives in Los Angeles, CA. 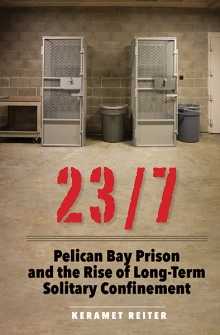