Image above is a photograph of the interior of the Hassan Mosque in Morocco, used with permission.

Terrorism; attacks on a kosher supermarket in Paris; fights over who can pray on the Temple Mount, known in Arabic as the Haram al-Sharif. When we juxtapose Jews and Muslims today, these are the sorts of associations that usually come to mind. The conflict in Israel/Palestine, and its spillover in Europe, has come to dominate discussions about how Jews and Muslims interact.

But there is a long history of Jews and Muslims co-existing in the Middle East before the creation of the state of Israel, a history of which too many remain ignorant. In Morocco, where Jews lived even before the arrival of Islam, violence was by no means the defining feature of Jewish-Muslim relations. Jews constituted a small but prominent minority in nineteenth-century Morocco, when Muslim sultans ruled the independent kingdom from their capitals in Fez and Marrakesh. Like most pre-modern societies in the Middle East, Morocco was ordered according to Islamic legal principles. Jews were classified as dhimmis, non-Muslim monotheists who were protected by the Muslim sovereign. In exchange for their protection, dhimmis accepted a second-class status; they submitted to certain restrictions, were expected to show deference to Muslims, and paid a special poll tax.

In other words, Jews and Muslims did not live in a state of liberal equality; yet they nevertheless shared a great deal socially and culturally. Take the example of a Jewish family from Fez, the Assarrafs: like most of their fellow Jews, the Assarrafs spoke a similar dialect of Arabic as their Muslim neighbors; they dressed in similar clothes; they ate the same cuisine; and they almost certainly engaged in many of the same rituals, like venerating the tombs of local holy men and women held sacred by members of both religions. And the Assarrafs entered into frequent and often intimate commercial relationships with Muslims, who made up most of their clients and even many of their business partners.

What I discovered in the course of my research is that Jews like the Assarrafs shared more than just culture and business with Muslims: they participated in a shared legal world. Jews operated their own robust system of courts throughout Morocco; Jewish courts in some cities even had the authority to send a Jew to a Jewish prison. Nonetheless, the Assarrafs, like most Jewish businessmen, regularly visited Islamic legal institutions—often every week. The Assarraf’s patriarch, Shalom, engaged with Islamic law so regularly that he became highly knowledgeable about the practices and procedures of Islamic tribunals, deftly employing his expertise to outmaneuver Muslim adversaries in court. Indeed, Shalom gained so much knowledge about Islamic law that Muslims even appointed him to be their lawyers. (Jewish lawyers in contemporary America are not exactly a rare species, but a Jewish lawyer representing a Muslim in pre-colonial Morocco is another matter!) Muslims, too, took advantage of the fuzzy jurisdictional lines separating Jewish and Islamic law in Morocco, and some went to Jewish judges and notaries to draw up their contracts or adjudicate their cases. Morocco was peopled by Jews and Muslims who lived their lives across legal lines.

But the upheavals of the nineteenth century did not bypass Morocco, and the country’s legal system changed profoundly. In particular, a new set of legal institutions arose: foreign consulates operated consular courts, with jurisdiction over foreign nationals and Moroccans with foreign protection. (Protection afforded local protégés the privileges of extraterritoriality, but required less commitment on the part of the foreign state.) Like many of his Jewish and Muslim colleagues, Shalom Assarraf acquired a patent of protection—in his case, from the United States consulate in Tangier. His foreign status made Shalom largely immune to local courts.

But Shalom’s protégé status did not move him from the jurisdiction of Jewish and Islamic courts into that of consular courts. Just as Jews moved deftly between Jewish and Islamic tribunals, so did Jewish protégés move between Moroccan courts and consular courts. Shalom Assarraf appeared in Islamic courts multiple times as both plaintiff and defendant, even after receiving American protection. In general, when Islamic law proved more favorable to a Jewish protégé’s case, he or she would request that a lawsuit be tried before a Muslim judge. Jews with foreign protection by no means left the system of Islamic courts; they merely expanded the set of legal institutions they frequented. The growth of foreign protection in late-nineteenth century Morocco offered Jews even more opportunities to shop amongst different legal fora, and many used their new legal flexibility to considerable advantage.

It was only when France colonized Morocco in 1912 that the shared legal world experienced by the Assarrafs and so many other Jews began to disappear. French reformers saw the fuzzy jurisdictional boundaries dividing Jewish and Islamic courts as a problem to be fixed; they insisted on high walls separating different jurisdictions. Increasingly, Jews were no longer able to visit Islamic courts, and Muslims could no longer visit Jewish ones. Consular courts were nearly abolished, and protection drastically reduced. The French succeeded in creating a more ordered legal world in Morocco, but it was far more segregated than anything that existed before the colonial period.

Nonetheless, the history of law in pre-colonial Morocco forces us to reexamine the stereotypes about Jews and Muslims that prevail on our screens and in our newspapers. Law acted as a doorway connecting Jews to Muslims. Law helped integrate Jews into the broader Moroccan society in which they lived, even in the absence of formal equality. Jews and Muslims may not have always lived in kumbaya-like harmony with each other. But the history of Jewish-Muslim co-existence in Morocco is an important and necessary antidote to the dire reports about Jews and Muslims in our world today.

Jessica M. Marglin is assistant professor of religion and the Ruth Ziegler Early Career Chair in Jewish Studies at the University of Southern California. Marglin lives in Los Angeles, CA. 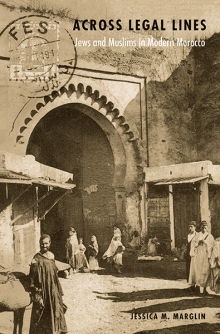