Image above is a photograph by Andy Rogers, used with permission.

It’s fall in New England, and in the region’s many farmers’ markets, mountains of corn and heirloom tomatoes have given way to bountiful displays of pumpkins, apples, cabbages, cranberries, and leafy greens. It’s a relief for many. This summer’s harvest was a lean time for a number of farmers and their customers. The troubles began this past winter; a combination of unseasonably warm temperatures followed by a sudden bone-chilling frost on Valentine’s Day damaged stone fruit crops across the Northeast. By the summer, orchards of peach, nectarine, and plum trees stood bare. Local food lovers, who look forward to these fruits’ fleeting appearances each summer, undoubtedly missed their ambrosial nectar.

Back in 2009, it was the region’s tomatoes that failed. A wet spring bled over into a gray, damp summer, prompting the onset of a fungal blight early in the season. Acres of tomato plants wilted. Farmers, particularly organic farmers, were forced to make hard choices. Some abandoned their organic certification and sprayed chemical fungicides, fearing catastrophic losses. Others voluntarily destroyed their plants, hoping to spare those not yet infected. Nearly every farmer waited anxiously for the first signs of disease. For many farms, it was a particularly bad year. But, as one farmer in the region explained to us, “Every year there are problems, and every year they are different.”

As organic agriculture has expanded, a shrinking number of farms are producing more of the organic food that makes it onto our tables. This is part of a general trend in agriculture: according to the United States Department of Agriculture’s 2012 census, 25% of U.S. farms accounted for 97% of U.S. agricultural sales. Such market dynamics have serious consequences for small farmers trying to make it in today’s agricultural economy. However, as an increasingly consolidated network of large farms, processors, distributors, and retailers capture a larger share of U.S. agricultural production, one thing is certain—small farms faced with a failed crop or an outbreak of disease can have a hard time keeping up.

Shoppers at New England farmers’ markets certainly felt the impact of both of these blows to the region’s normally bountiful harvests. When the tomato crop was struck with blight in 2009, the Connecticut chapter of Slow Food even had to cancel its annual heirloom tomato festival, given how few tomatoes were available in the region. However, Trader Joe’s still kept its freezers stocked with frozen pizzas, not to mention tomatoes from other parts of the world. Walking through New England Whole Foods locations, one could almost forget about the tomato blight in the face of glistening piles of California-grown heirloom tomatoes. This year the midsummer pleasures of freshly-baked pies, piled high with juicy local fruit, were off the table for New Englanders. Nevertheless, at our area grocery stores there were plenty of peaches to be had. Some were from New Jersey, just far enough south to escape the worst of the damage, but most were from far more distant fields in California. We still managed to have our share of peach pies.

Meanwhile, for New England’s farmers and orchardists, the Valentine’s Day Freeze will leave a mark on their memories and balance sheets that may last for decades. Years after the tomato blight struck in 2009, the farmers we spoke to were still talking about the damage it wrought on their farms and the toll it took on their livelihoods. Given the fact that organic shoppers can always get the produce they are looking for from an increasingly industrialized food system, how do small farmers try to survive in a market where the only certain truth is that every year their will be problems? Alternative markets where farmers can sell directly to consumers, such as farmers’ markets or Community Support Agriculture (CSA) programs, have proven to be critical to the success of small farms. However, the choice to market in these ways ties farmers to social, economic, and ecological relationships that have the power to shape nearly every aspect of their businesses.

Direct-to-consumer sales strategies almost carry a mandate for farmers to emphasize crop diversity. At the farmers’ market, a specialty item like an array of cheerful sunflowers might draw customers in, but bushels of countless varieties of seasonal produce keep them at the stall making additional purchases. One farmer we spoke to felt that a tomato-only CSA would be a farmer’s dream. Ounce per ounce, tomatoes are one of the most profitable crops a New England farmer can grow, and they are certainly easier to harvest by hand on a small farm than midsummer green beans. However, when customers pay several hundred dollars up front for a season’s worth of weekly produce boxes, it’s only reasonable for them to expect to be able to make a number of different meals with their farm share—not just one glorious Caprese salad.

This pressure to diversify can help make small farms more sustainable. Ecologically diverse farms have long been a hallmark of sustainable farming practices; they allow for rotation schedules that can keep farms ahead of pests and disease, and they provide an ecological system attractive to beneficial organisms like wild bees and other pollinators. A diversity of crops also means that when a disease like the tomato blight hits small farms, there are other crops to market. Sales strategies like CSA programs, where consumers pay up front for potential farm yields, help spread the risk even more. However, the fear of losing customers and the more personal relationships fostered by direct-to-consumer sales can make farmers hesitant to allow shoppers to shoulder such risks. When their tomato crops failed in 2009, the farmers we worked with scrambled to plant supplemental crops and padded produce boxes for their CSA with extra bunches of greens. Moreover, while farmers’ markets might be a tremendously popular venue for local food, they can also be a tremendous amount of work for farmers. One New England farming couple decided to pull out of selling at the farmers’ market they frequented when they had a child. For them, an entire day picking for the market, followed by an entire day off the farm, was stretching their lives and their relationships too thin. One evening at a large urban farmers’ market, one farm’s market manager seemed exasperated—it was nearly dinnertime and she hadn’t had a chance to stop and eat since she left her farm early that morning.

The potentially catastrophic losses faced by small farmers during a bad season are by no means unique to New England. However, these examples encapsulate many of the broader challenges facing small farmers in an industrial, global food system. Diversified farming operations emphasizing direct-to-consumer sales can help some farms to face these challenges, but they present their own difficulties. Because, at the end of the day, while we can leave the farmers’ market empty-handed and try the grocery store for peaches, it’s a different story for small farmers staking their livelihoods on such crops and struggling to ensure that something else is on offer to make up the difference. A more sustainable future might require changing our own relationships with the food system, beyond changing where we choose to shop.

Connor J. Fitzmaurice is a Ph.D. candidate in the Department of Sociology at Boston University. He lives in Brighton, MA. Brian J. Gareau is associate professor of sociology and international studies at Boston College. He lives in Concord, MA. 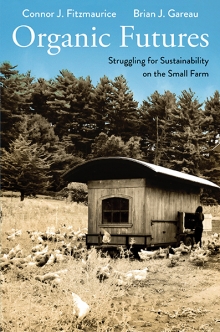