Image above is a photograph by Ed Brambley of Aleppo, used with permission.

The acrimonious breakdown of the latest Syrian ceasefire and the renewed assault on Eastern Aleppo serve as reminders that Syria’s highly internationalized civil war seems unlikely to be resolved any time soon. The conflict originated in a largely peaceful uprising against President Bashar al-Assad that turned violent in the face of regime brutality. However, external conditions shaped the character of the conflict from the start, and leading states greatly influenced both sides—most notably, the U.S., Russia, Iran, Saudi Arabia, Turkey and Qatar. Yet these external players viewed the crisis not in isolation but rather through the lens of their wider regional goals, and their different priorities in Syria have shifted over time. For them, Syria is one battle of several as part of a wider regional struggle.

The conflict has been prolonged for a variety of reasons, both domestic and international, but the changing goals of the external protagonists are often overlooked. David Cunningham, an expert on civil wars, has argued that the more external actors are involved, the longer civil wars last. With few hurting significantly as a result of their involvement, these actors rarely withdraw until their independent agendas are met; and the more agendas in play, the more difficult for any resolution to satisfy all players. If these agendas shift over time, resolution becomes even more difficult. Instead, the players act as “resolution blockers” prolonging the war. In Syria, feeding into the mixed agendas of the various domestic players, the six key external players have contributed six further agendas, none of which have remained static over the course of the conflict.

Turkey’s stance, for example, has clearly evolved. In 2011 Ankara very publicly turned on its former ally Assad, sponsoring the political and armed opposition. In 2011 Prime Minister Recep Tayyip Erdogan hoped regime change in Syria would boost Turkey’s regional leadership by bringing to power a friendly, popular government, ideally involving his ally the Muslim Brotherhood. Yet the opposition did not topple Assad, and new threats to Turkey emerged in Syria in the form of ISIS and the PYD, allied to the Turkish Kurdish separatists, the PKK. This prompted a recent shift by Erdogan, now president, sending a detachment of tanks to support rebels in Syria, not against Assad, but to remove both ISIS and the PYD from a stretch of Turkey’s border. Talk of regional leadership has now evaporated, and there are suggestions that a recent détente with Russia, a key Assad ally, will see Turkey soften its stance against Damascus. Turkey played a major role in backing anti-Assad forces, but ultimately prioritized its own interests after the rebels didn’t deliver the swift victory Ankara hoped.

Turkey’s close ally Qatar also backed the armed and political opposition early on in the war in hopes that their victory would boost Doha’s regional clout. Yet developments elsewhere—the toppling of its Muslim Brotherhood allies in Egypt in 2013, a change of leadership in Doha, and a public relations campaign led by regional rivals Saudi Arabia and the UAE linking Qatar to Al-Qaeda—prompted a more backseat role in Syria after 2014. Saudi Arabia, in contrast, was initially more cautious in Syria but became a lead opposition backer after it wrestled leadership from Qatar in 2013. Seeing the defeat of Assad as a means to weaken Damascus’ ally and Riyadh’s bête noir, Iran, Saudi increased financial and armed support for the rebels in 2015 as part of a more assertive regional policy ushered in by the new king, Salman, and his ambitious son, defense Minister Mohammad Bin Salman. But another component of this shift, a protracted intervention in Yemen’s civil war against another of Tehran’s allies, the Houthis, has become the greatest priority for Riyadh, possibly checking Saudi ambitions to escalate further in Syria.

As the conflict has ebbed and flowed, the United States’ priorities in Syria have fluctuated even more than those of its regional allies. At different times Washington has sought to topple the Assad regime, support democratic aspirations, contain the conflict, resolve the conflict, prevent the proliferation and use of chemical weapons, prevent the growth and success of jihadist groups, and minimize humanitarian suffering. Overarching these multiple (and often contradictory) aims is Barack Obama’s desire to avoid wading into what he saw as another Middle Eastern quagmire after the failures of Iraq and a commitment to keep U.S. “boots on the ground” to a minimum. The result has been a sometimes confused and distant approach to Syria that has frustrated Washington’s regional allies and many in the Syrian opposition. Yet the U.S., like its regional allies, has consistently seen Syria through a wider lens. It eventually intervened against ISIS rather than Assad because the former posed an immediate threat to Washington’s interests, both in Iraq and globally, in a way that the Syrian dictator did not. Similarly, its engagement with Russia over Syria cannot be divorced from its wider concerns over Putin’s activities in Ukraine and beyond.

It might be argued that Assad’s main state backers, Iran and Russia, have benefited from having clearer polices in Syria from the start: to preserve Assad’s regime. This is partly true, although both have shifted their strategies within this wider goal. Iran sees Syria as a historic partner—a strategic link with its Lebanese ally Hezbollah and a defensive buffer for its newly acquired assets in Iraq. However, when it became clear that Assad’s military was incapable of defending and retaining the whole of Syria, Iran prioritized the areas of Syria vital to keeping Hezbollah well supplied: the route from Damascus airport to Lebanon and the border regions of Qalamoun and Hermel. It also helped Syria build a new militia force, the National Defense Forces (NDF), partly as a backup to protect Iranian interests should Assad and his military collapse.

Russia also diverted its support towards key strategic locations, but different to those favored by Iran. When Moscow sent a sizable military force to support Assad in September 2015, it focused on the coastal region where Russia had long had a naval base. Unlike Iran, it favored working with Assad’s existing military over the pro-Iranian NDF. But Russia’s goals have also changed over time. In 2011-14, Moscow offered Assad diplomatic and financial support primarily as a defensive measure, fearing that the toppling of its ally would represent a geo-strategic victory for the U.S. and its regional allies. Yet after 2014, in line with President Vladimir Putin’s more aggressive stance in Ukraine, Russia opportunistically adopted a more offensive stance, hoping that military support for Assad would boost its regional and global credentials as an alternative superpower to Washington. It also genuinely feared the rise of ISIS given the links between radicals in the Syrian opposition and Russian Jihadists.

What is clear from this survey of evolving interests is that none of these external actors have ever prioritized ending the conflict, or minimizing the suffering of the Syrian people over their broader regional aims. All have committed considerable political and often economic and military capital to the war, but none (with the possible exception of Qatar) have been hurt enough to cut their losses. All in their own way are now “resolution blockers,” determined to ensure that they get a favorable outcome in the war, and willing to continue backing Syrian allies until they get one. Yet with so many actors still involved, and with their goals constantly evolving according to wider regional developments, it will be difficult for any resolution to persuade enough to cease their involvement.

Christopher Phillips is senior lecturer, International Relations of the Middle East, Queen Mary University of London, and associate fellow, Chatham House Middle East and North Africa Programme, where he founded the Syria and Its Neighbours Policy Initiative. He lives in London. 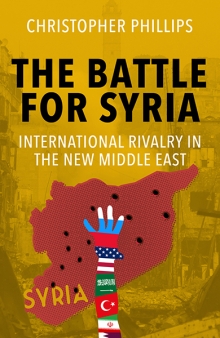