National liberation is an ambitious and also, from the beginning, an ambiguous project. The nation has to be liberated not only from external oppressors—in a way, that’s the easy part—but also from the internal effects of external oppression. Albert Memmi, the Tunisian Jew who wrote perceptively about the psychological effects of foreign rule, makes the critical point. The Jews will have to be delivered from “a double oppression: an objective external oppression made up of the … incessant aggressions inflicted on [them] and an auto-oppression … whose consequences were just as harmful. One of the consequences of these two together is the internal domination of traditional elites, the mediators of foreign rule—the men and women, mostly men, who move back and forth between the subject nation and its rulers, negotiating with the rulers, bribing them when necessary, accommodating their demands when that seems necessary, making the best of a difficult and often humiliating relationship. The figure of the “court Jew” has parallels in every nation ruled by foreigners, and one of the aims of national liberation is the elimination of this role and the defeat of the people who made it their own.

But another, even more important effect of this doubled oppression has to be overcome, and that is the passivity, the quietude, the deep lethargy of the dominated people. No nation can live for long under foreign rule, or, like the Jews, in exile, without accommodating to its condition and making its peace with the powers that be. Early attempts at resistance are repressed, often brutally; after that, resistance goes underground, where it finds expression in common complaint, mockery, and evasion. Leftist scholars have contrived to celebrate this sort of thing, and it ought to be celebrated. But the larger, sadder story is one of accommodation, the practical alternatives generally being less attractive. Accommodation will be more or less profound depending on the severity of the conditions that have to be accommodated and the number of years, or decades, or centuries during which those conditions prevail. In the sphere of politics, accommodation takes a variety of forms: fatalistic resignation, withdrawal from political activity to familial or communal concerns, even acceptance of the political “superiority” of the foreign rulers. In this last case, the local culture is reconceived as somehow unsuited to politics, devoted to higher, more spiritual pursuits. “They,” the British, the French, Europeans generally, have a talent for politics; they have the ruthlessness necessary for imperial domination; “we” submit because we are focused on more important things; ruthlessness is alien to us. Even liberationists like Mohandas Gandhi, who didn’t want to imitate the ruthlessness of imperial rulers, believed nonetheless that the old accommodation had to be overcome; it was necessary to “train the masses in self-consciousness and the attainment of power.” Gandhi’s “constructive program” was aimed at producing men and women who were “fit” for independence, capable of “managing [their] own affairs”—though not, like the British, everyone else’s. This task should rightly have preceded national liberation but was, in all my cases, unfinished at the moment when independence was won. From the beginning the constructive programs of the liberationists met with difficulties.

Once people have settled in and adjusted themselves, one way or another, to a particular version of foreign rule, the men and women who suddenly appear and offer to liberate them are likely to be regarded with suspicion—as Moses was when he tried to explain to the Israelites that they were about to be delivered from Egyptian slavery. Here the biblical text tells a classic story, which is repeated again and again when young and enthusiastic liberators first encounter the people they mean to liberate and find them frightened and reluctant. The liberators soon discover that they need (in modern terms) to “raise the consciousness” of the people before liberation is possible.

What can this mean except to oppose the people’s already existing consciousness, which has been shaped by oppression and accommodation? Raising consciousness is a persuasive enterprise, but it quickly turns into a cultural war between the liberators and what we can call the traditionalists. Raising consciousness can be a tense business. It’s possible for a charismatic leader like Gandhi to adapt the traditional culture to the needs of national liberation, but adaptations along these lines are likely to face fierce opposition; their success may well be brief. And even Gandhi was deeply opposed to many aspects of Hindu culture, especially the fate of the “untouchables.” He was assassinated by someone committed to a more literal, or more traditional, or perhaps more radically nationalist version of Hinduism.

I have taken this example, and all my examples, from the history of nationalism, but I want to stress that national liberation is a subset of that history, a piece of it, not the whole of it. Indeed, the liberationist project seems somewhat at odds with Webster’s definition of nationalism: “a sense of national consciousness exalting one nation above all others and placing primary emphasis on promotion of its culture and interests as opposed to those of other nations.” There are certainly men and women with this sort of consciousness in all the national liberation movements—they form its right wing. Nationalism for them is a zero-sum game. But the “primary emphasis” of the movements’ leaders is doubly different: first, they aim to achieve political equality with, rather than a dominant position over, other nations, and, second, they aim to liberate their own nation from long-standing traditions of authoritarianism and passivity—indeed, from its own historic culture. Liberation is closer to revolutionary politics than to national aggrandizement. Like the liberationist militants, revolutionaries set themselves in opposition to established patterns of submission, accommodation, and (what Marxists call) “false consciousness.” They aim at a radical transformation. Social revolution requires a struggle against the existing society; national liberation requires a struggle against, rather than an “exaltation” of, the existing nation.

This is also, often, an antireligious struggle, for religion, as Jawaharlal Nehru wrote, teaches “a philosophy of submission … to the prevailing social order and to everything that is.” Nehru was repeating here the standard liberationist view, which follows from the fact that accommodation to foreign rule commonly takes a religious form—in part for the obvious reason that otherworldliness offers comforts that are always available, however bad things are here and now. But the secular militants of national liberation are mistaken if they describe the comforts of religion as nothing more than pie in the sky. Religion also generates fantasies of reversal and triumph and then, intermittently, revivalist and millenarian movements that are sometimes tumultuous but always ineffective. Millenarianism looks like opposition to foreign rule, and may be that briefly, but over the long run it is a form of political accommodation—for it doesn’t produce a steady or persistent oppositional politics, and the millennium never arrives. Another, more concrete form of accommodation is resolutely this-worldly and doesn’t look forward to apocalyptic events. In fact, most religions prescribe a regimen that can and should be established right now. It requires submission from ordinary believers and assigns an authoritative role to traditional religious leaders—who are often already local officials and judges, appointed by and submissive in turn to foreign rulers.

But neither millenarian nor traditionalist politics invites ideological commitment or long-term activism. Nor does either politics promise individual freedom, political independence, citizenship, democratic government, scientific education, or economic advance. It is for the sake of all these that the national liberationist or revolutionary militants need to transform the people in whose name they are acting—and that transformation requires the defeat of the people’s religious leaders and the overcoming of the people’s customary way of life. V. S. Naipaul, writing thirty years after Indian national liberation, perfectly captures the attitude of the liberators toward the religion of the people:

Hinduism … has exposed us to a thousand years of defeat and stagnation. It has given men no idea of a contract with other men, no idea of a state. It has enslaved one quarter of the population and always left the whole fragmented and vulnerable. Its philosophy of withdrawal has diminished men intellectually and not equipped them to respond to challenge; it has stifled growth.

National liberation, by contrast, is a secularizing, modernizing, and developmental creed. It is, as its opponents say, a “Western” creed, and to the nation about to be liberated, it is something entirely new. Indeed, newness is the mantra of the liberators. They offer the oppressed people a new beginning, a new politics, a new culture, a new economy; they aim to create new men and women. Thus David Ben-Gurion: “The worker of Eretz Yisrael [the Land of Israel] differs from the Jewish worker in Galut [exile] … [He is] not a new branch grafted to an old tradition, but a new tree”—literally, in Ben-Gurion’s eyes, a new kind of Jew. Similarly, Frantz Fanon: “There is a new kind of Algerian man. The power of the Algerian Revolution … resides in the radical mutation that the Algerian has undergone.”

We can gain some sense of what all this means from the history of the United States: what Ralph Waldo Emerson and his contemporaries called “the American newness” was achieved through the escape from Old World tyrannies and traditions. In American history, as in the history of ancient Israel, the victory of the new required a geographic move rather than a political movement. Indeed, the American experience led Louis Hartz to argue that the “only really successful revolution is … a migration.” But the same sense of starting over is present in all the cases of national liberation, even if the new beginning is in an old place.

Of course, this newness encounters resistance, which begins as a stubborn allegiance to the-way-things-have-always-been but soon becomes ideological and therefore also new: fundamentalism and ultra-Orthodoxy are both modernist reactions to attempts at modernist transformation. The slogan of Jewish ultra-Orthodoxy, “Everything new is forbidden by the Torah,” is itself a new idea; it would have made the historic accommodation to exile impossible. Jewish survival required a lively adaptability and a readiness for innovation. But the slogan works well against attempts to bring the exile to an end, and one can find similar examples of opposition to the newness of national liberation in India and Algeria. What is more surprising is the reappearance of this opposition after the achievement of political independence, when the defenders of traditional religion, themselves renewed and modernized, begin the construction of a counterrevolutionary politics.

From The Paradox of Liberation, published by Yale University Press in 2015. Reproduced by permission.

Eminent political theorist Michael Walzer, an emeritus professor at the Institute for Advanced Study, served as coeditor of the political journal Dissent for more than three decades. 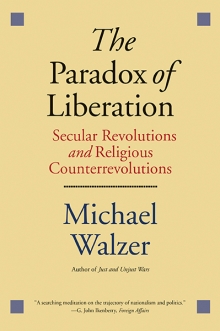