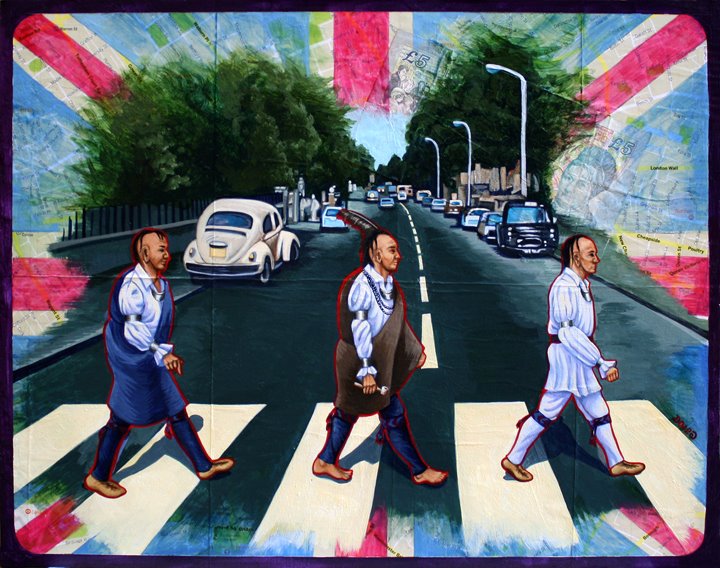 Image above is London Calling (2012) by America Meredith, used with permission.

They have been so since the very beginning. For example, when John Dee, an astrologer, mathematician, and advisor to Queen Elizabeth, coined the phrase “the Brytish Empyre” in the 1570s, he himself was already embedded in colonial and Indigenous histories: among his possessions was an obsidian mirror that somehow found its way from the Aztec Empire to Dee’s London home. From before its inception, London’s colonial project was deeply linked to Indigenous people, places, and things.

Human travelers came to London for a host of reasons. Some came as captives: in the 1570s, for example, four Inuit people—two men, a woman, and a baby—were captured by Martin Frobisher and brought to England, where they all promptly died, but not before becoming something of a spectacle to curious onlookers.

Others came as diplomats. Among the most famous of these was the Powhatan noblewoman Pocahontas who traveled to London in 1616 as part of a reconnaissance mission to explore English culture, economy, religious, and political ambitions. After being seen at court, she died at the beginning of the return voyage and was buried at Gravesend, a small town east of London. Like Pocahontas, other Indigenous visitors became celebrities in the city. In 1710, for example, three Mohawk leaders and a Mahican compatriot came to London to pursue alliances with the British. Named “the Four Kings” by observers, the men were enormously popular celebrities while in the city, their daily activities recorded in the press and their speech to Queen Anne printed, reprinted, and widely disseminated throughout all segments of London society. They left their mark on the city; one of the most notorious urban gangs of the era even named themselves “the Mohocks.”

Still others came as performers. In the 1840s and 1850s, for example, several Ojibwe men and women arrived in London to pursue careers on the city’s stages, thrilling crowds and scandalizing the racist Charles Darwin; and in the 1890s and 1900s, the Mohawk poet E. Pauline Johnson drew large audiences as she performed her original works.

These are just a few of the many Indigenous people who sojourned to London over the course of the five-plus centuries. They included Aboriginal Australian cricketers, Maori sailors, Lakota Wild West Show performers, and Salish leaders from British Columbia. Many of the travelers are remembered by descendant communities today; in 1988, for example, the Aboriginal activist Burnum Burnum led a ceremony at the grave of one of the cricketers, who died while on tour in 1868. Bripumyarrimin’s grave in the East End remains today, a testament of both Indigenous passing and Indigenous persistence.

The story of Indigenous London is one of both loss and survival; while a good number of the travelers died in London, many more returned to their homelands to share with their people accounts of their time in the metropolis across the sea. Their stories show how even in a place like London, we can find Indigenous history—past, present, and future—and even rethink the history of one of the world’s great cities.

Coll Thrush is associate professor of history at the University of British Columbia, where he is also affiliated with UBC’s Institute for Critical Indigenous Studies. Originally from the Seattle area, he lives in Vancouver on unceded Coast Salish territories. 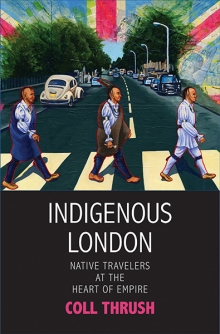