Consider two aspects of globalization: first, the ability of people living in Afghanistan, Iraq, or Yemen to bring sudden death and terror to New York, London, Madrid, Paris, and Sydney; and second, the emission of greenhouse gases from power stations, vehicles, and even cattle. The former leaves unforgettable images that are watched on television screens all over the world; the other causes changes to the climate of our planet in ways that can be detected only by scientific instruments. Yet both are indications of the way in which we are now one world, and the more subtle changes to which our vehicle exhausts contribute are already killing far more people than the highly visible deeds of terrorists.

Over the decades since the 1980s, as scientists piled up the evidence that continuing greenhouse gas emissions will imperil hundreds of millions, perhaps billions, of lives, state leaders struggled to agree on a plan for making sufficient cuts in those to prevent world emissions to prevent a serious risk of climate becoming catastrophic, although such a plan would clearly be in the interests of the world as a whole. As we shall see later in this book, even the agreement reached in Paris in 2015 does not do enough.

The lack of the necessary global perspective was never better illustrated than by George W. Bush. As president of the United States, the country that has, by its emissions over the past century, done more than any other to make climate change a problem, he said, “We will not do anything that harms our economy, because first things first are the people who live in America.”

That remark was not an aberration but an expression of an ethical view that too many political leaders take for granted. His father, the first President George Bush, had said much the same thing at the 1992 Earth Summit in Rio de Janeiro. When representatives of developing countries asked the president to put on the agenda the over-consumption of resources by the developed countries, especially the United States, George H. W. Bush said, “The American lifestyle is not up for negotiation.” It was not negotiable, apparently, even if maintaining this lifestyle will lead to the deaths of millions of people subject to increasingly unpredictable weather and the loss of land used by tens of millions more people because of rising ocean levels and local flooding.

But it is not only the two Bush administrations that put the interests of Americans first. In the early 1990s, in the context of the debate over whether to intervene in Bosnia to stop Serb “ethnic cleansing” operations directed against Bosnian Muslims, Colin Powell, then chairman of the Joint Chiefs of Staff under President Bill Clinton, quoted with approval Otto von Bismarck’s remark that all the Balkans were not worth the bones of a single one of his soldiers. Bismarck, however, was not thinking of intervening in the Balkans to stop crimes against humanity. As chancellor of Imperial Germany, he assumed that his country followed its national interest. To use his remark as an argument against humanitarian intervention was to return to nineteenth century power politics, ignoring both the bloody wars that style of politics brought about in the first half of the twentieth century and the efforts in the second half of the twentieth century to find a better foundation for peace and the prevention of crimes against humanity.

In Kosovo, though the Clinton administration’s policy of giving absolute priority to American lives did not prevent intervention to defend the Kosovars, it led to the restriction of intervention to aerial bombardment. Th is strategy was a total success: NATO forces suffered not a single casualty in combat. Approximately 300 Kosovar, 209 Serb, and three Chinese civilians were killed. President Barack Obama used a similar “air power only” strategy against the Islamic State, or ISIS, after 2014, when it was threatening to overrun Iraq. Again, this strategy avoids American casualties, but, as Ivan Eland pointed out, “If the U.S. uses only air power, ISIS will eventually hide in the cities and the U.S. will be faced with causing a lot of civilian casualties to get the group out or kill its fighters.”

Observing the American reliance on air-power to protect the people of Kosovo, Timothy Garton Ash wrote, “It is a perverted moral code that will allow a million innocent civilians of another race to be made destitute because you are not prepared to risk the life of a single professional soldier of your own.” Th is does not mean that putting “boots on the ground” is always a good thing to do: the American invasion of Iraq in 2003 brought about the regional chaos in which ISIS has thrived. It also, according to an estimate by researchers at Johns Hopkins University, caused 654,000 more Iraqi deaths than would have been expected under prewar conditions. Nevertheless, Ash’s comment raises a fundamental ethical issue: to what extent should political leaders see their role as limited to promoting the interests of their citizens, and to what extent should they be concerned with the welfare of people everywhere?

From One World Now by Peter Singer. Reproduced by permission.

Peter Singer has been called the world’s most influential philosopher. His Animal Liberation is widely credited with launching the animal rights movement. Singer is professor of bioethics at Princeton University and laureate professor at the University of Melbourne. He lives in New York City. 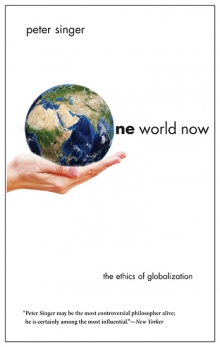