The Spring/Summer 2004 Deliverance show was, for me and for many others, a uniquely memorable Alexander McQueen accomplishment.  It expressed breathtaking contradictions: a combination of the classic and the modern; a coexistence of Lee’s singular, visionary genius with the organizing structure of a well-known Hollywood movie.  It was dazzling; it invented a new world.

The collection was based on the narrative of the 1969 Sydney Pollack movie “They Shoot Horses Don’t They?” starring Jane Fonda, Michael Sarrazin and Susannah York.  It was a desperate movie about hunger and youth during the 1930s Great Depression in America, in which a motley group of characters vie to win a cruel and physically punishing dance marathon with a cash prize.

Lee incorporated men into this show, dancers who wore retro American workers’ clothing or freshly pressed trousers — sailor’s Service Dress Whites — with loose suspenders and shirts. The women’s dresses were silky and sexy, some with diaphanous meadow flower prints, designed and worn provocatively; some performers sported dance competition numbers on their backs, set in crystals within perfect black squares.  It was an impeccably staged performance with the devil in all the detail.  Lee’s spellbinding “Deliverance” required all of the models to dance, and he encouraged them to express themselves freely within their frenetic realization of the choreography by the brilliant Michael Clark.  Lee’s unflinching trust in his collaborators was part of the alchemy that day. 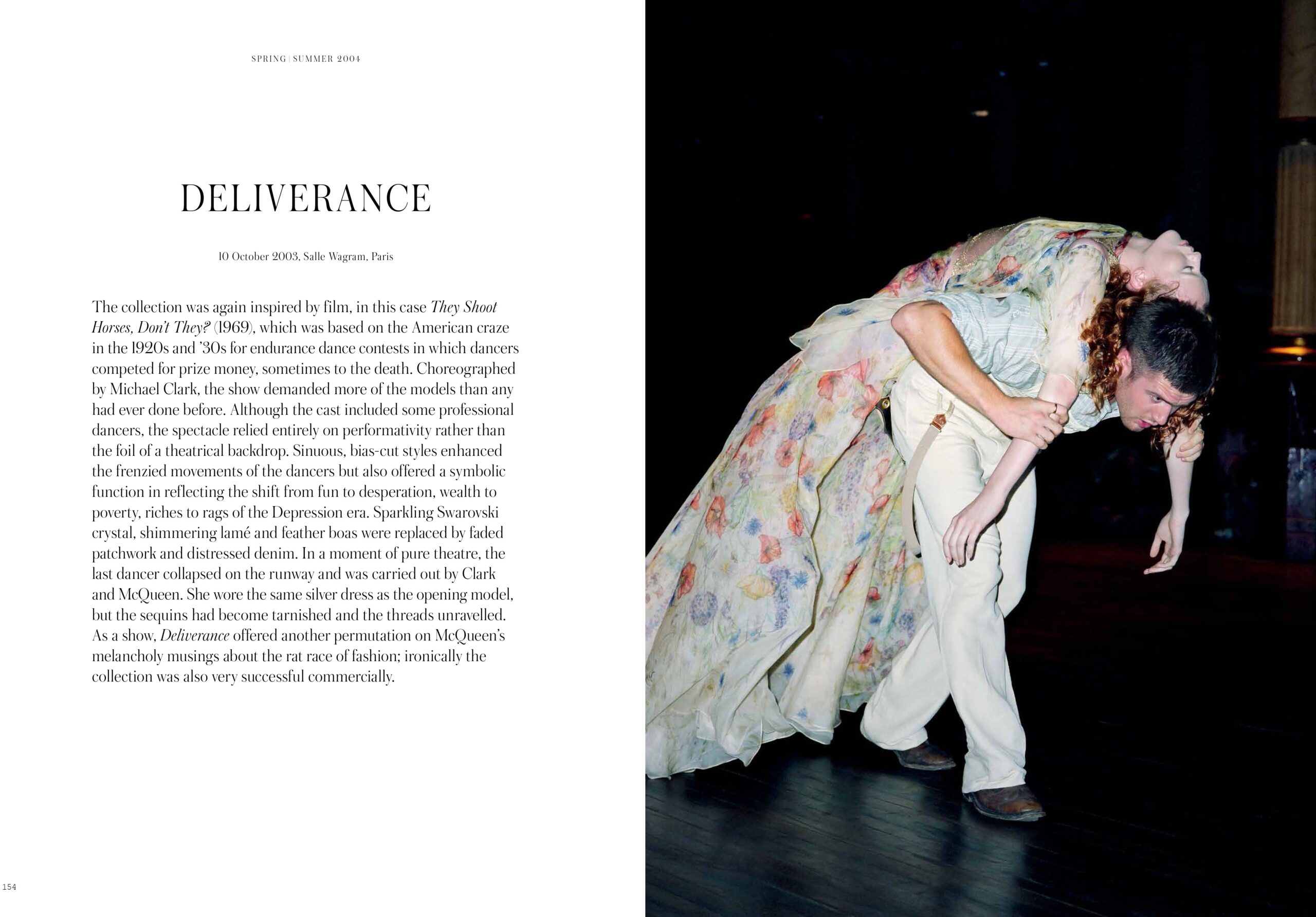 I found a spot on the floor, and crouched by the models’ and dancers’ entrance to the hall, which meant I was privy to the performers’ screams of laughter and momentary nerves before they went on stage.  The sense of madness and pandemonium was reinforced by the accompanying soundtrack: Big Band, Swing, and Disco with intermittent, discordant interruptions of sirens.  I remember feeling displaced in time as I sat on the floor, stunned and captivated… I was well used to fashion shows and loud music by that time, but it was beyond anything I’d seen.

I photographed almost on auto-pilot, anxious that I might miss even an instant of the turmoil and anguish so plainly on display, the dancers racing about, the models in tissue silk dresses and high heels, on the verge of falling to the floor directly in front of me.  The greatest challenge for me was to make the best use of the unusual ambient light, as my Fuji medium-format camera had only a tiny, built-in flash. The mirrored disco ball, positioned over the centre of the floor, and a spotlight tracking the dancers, made it easier to capture the exquisitely feminine dresses… the draped sleeve falling off a shoulder… the girl staggering across the floor… Karen Elson at her most beautiful, in a torn dress and being carried, nearly lifeless, across the stage. 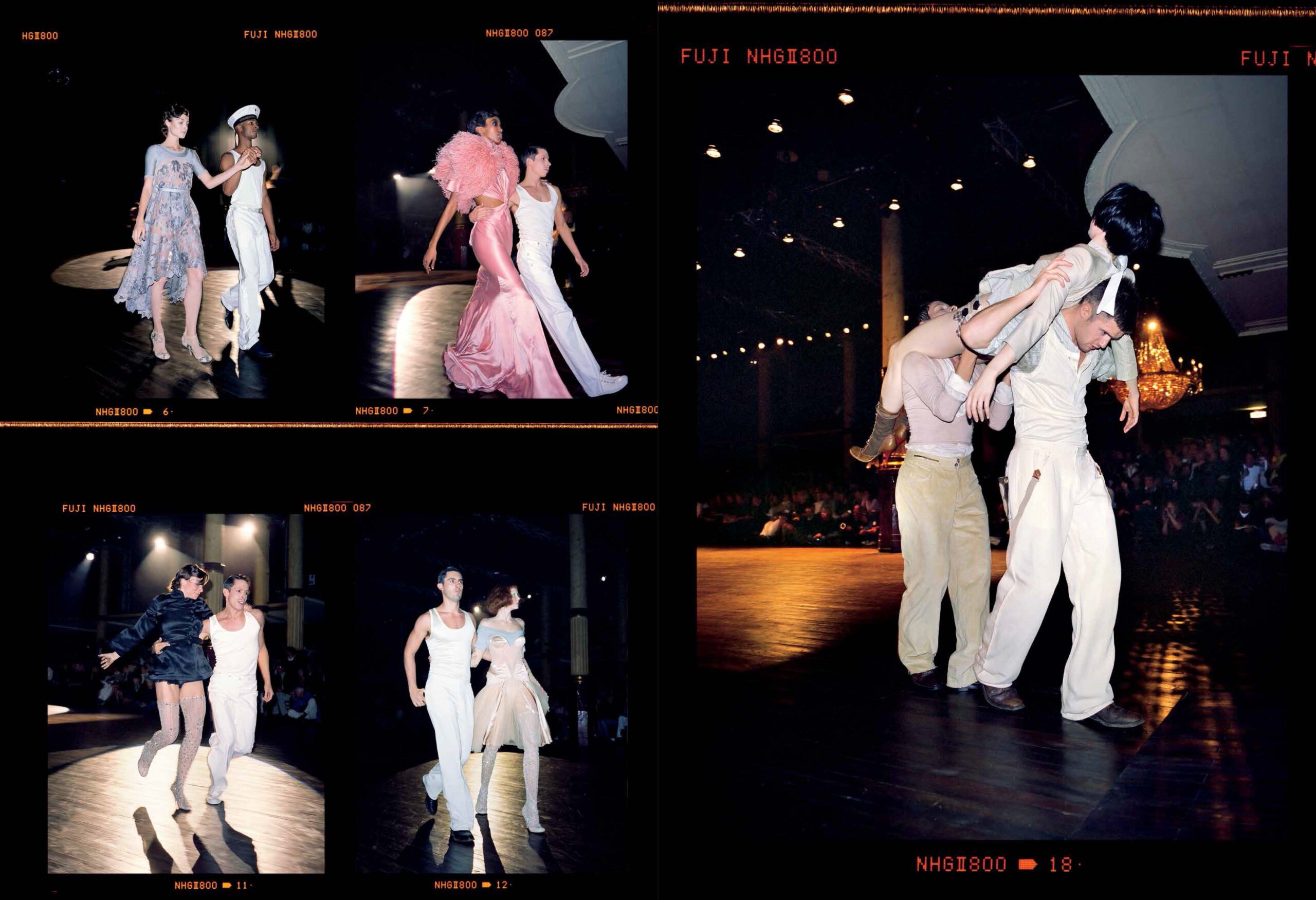 Everyone in the audience lived, for fifteen glorious minutes, within Lee’s imagination. I felt truly involved, and I think others did, too, as the spectators’ speechless wonder gave way to shouts of encouragement, audible gasps and passionate applause intended to revive dancers who appeared to have fainted from exhaustion… we willed them to recover and continue the dance.   As the music changed — now Billie Holiday, now Portishead — I remember the performers dancing, spinning, raising hell, competing until their “bodies [were] broken….. or their dreams” (to paraphrase the movie).  It was equal parts live performance, happening, and fashion show. 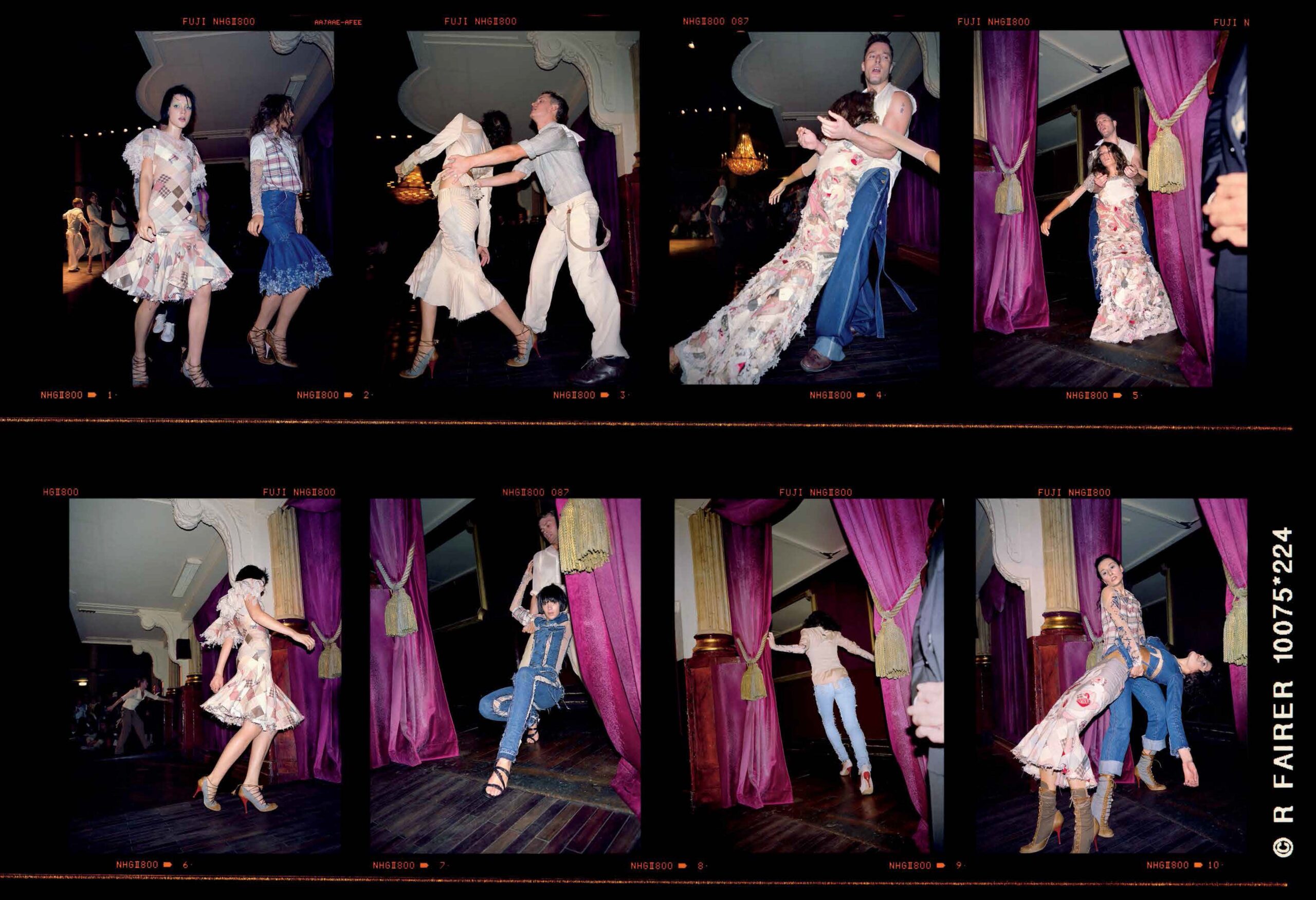 “They Shoot Horses Don’t They?” found its way, improbably, into Lee’s insatiable, inquisitive artistry.  His interpretations, from this movie and other sources, were beautifully expressed through his living art, his specific vision for how his clothing should move and flow when worn by his heroines: Karen Elson, Kate Moss, Isabella Blow.

La Salle Wagram, where McQueen’s “Deliverance” was staged, burnt down shortly afterward, and was completely destroyed.  Not so my “Deliverance” memories, nor, surely, the memories of anyone else who saw the show.  In the Stanley Kubrick movie “The Shining” (which inspired one of Lee’s earliest 1990s shows), the young writer Jack Torrance, a character played by Jack Nicholson, sees an impossible photograph on the wall of the movie’s setting, the Overlook Hotel: in the photo is Jack himself, 60 years earlier, as a member of the hotel staff.  At this climactic moment, Jack realises that he is trapped in a fantastical temporal loop and will never leave the Overlook.  I like to imagine something analogous, if less sinister, about the “Deliverance” show: I imagine the dancers and models will forever be performing in that theatre, on that night, somehow.  It was unforgettable… because it was timeless McQueen.

Robert Fairer was American Vogue’s exclusive backstage photographer for over a decade; his work has appeared in Elle, Harper’s Bazaar, GQ, and the New York Times, among many other publications. 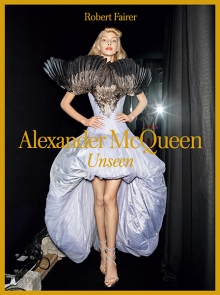