Image above by Lila Afifi, used with permission.

In today’s world, it’s easy to imagine that the evolutionary forces that gave rise to our species are no longer at work. Nature may be “red in tooth and claw,” as Tennyson observed, but the callous forces of nature seem hardly to affect us when we live in climate-controlled environments, grow food at industrial scales, and have chemical and technological solutions for injury, disease, and infertility.

Indeed, improvements in access to healthcare, nutrition, and medicine have driven infant and child mortality rates so low that 99.4 percent of babies born in the United States now survive into adulthood. We also have more control over our own reproduction, with more than half of women around the world using some form of modern contraception. Likewise, babies born as a result of assisted reproductive technology like in vitro fertilization comprise a growing proportion of the population.

With both survival and reproduction, the main ingredients of natural selection, increasingly under our control, it is tempting to suggest that culture—defined broadly as a set of beliefs, practices, and behaviors that can be transmitted between individuals—is replacing natural selection as the primary means by which our species evolves. Yet culture and natural selection are not mutually exclusive catalysts for changes to our biology and behavior. Rather, they interact in complex ways, such as those listed below, that are affecting our ongoing evolution.

1. Culture can be an agent of natural selection. Diets underwent a dramatic overhaul some ten thousand years ago following the invention of agriculture. Evidence of the impact of this cultural shift can be seen in the human genome, including in genes that control enzymes needed to digest the new types of foods. Among people that began raising cattle, natural selection favored gene variants that allow adults to digest milk by continuing to produce the enzyme lactase beyond infancy. Likewise, among populations that grew grains like wheat or rice, the gene for the enzyme amylase underwent a series of duplications that led to higher production rates and hence improved digestion of starch.

Today, diets are once again undergoing dramatic changes that are likely to influence our ongoing evolution. Salt and fat are replacing starch and fiber as the dominant components. Obesity and diabetes, both of which are linked to diet, are on the rise, and cardiovascular disease has replaced infectious diseases as the leading cause of death in the developed world. The microorganisms that live in our guts, many of which provide beneficial services, are affected by these cultural changes. People living in industrialized, urban environments have lost many of the microbes that are normally found in the human gut, and declines in gut microbial diversity have been linked to the rise of conditions such as food allergies, celiac disease, and inflammatory bowel disease.

2. Culture and natural selection can be at odds. The age at which women become mothers has been increasing in many regions of the world, particularly where there is increased access to healthcare and better education for women. Yet numerous studies have found that natural selection favors an earlier age at first birth, because women who start families earlier tend to have more children over the span of their lives. While certain cultural pressures may encourage a later start to motherhood and smaller families, natural selection is pulling in the opposite direction. So far, culture seems to be winning the tug-of-war, as the average age at first birth (for American women) has risen since from 24.6 in 1970 to 27.9 in 2014. But evolutionary change is typically slow, especially compared to culture, which can change rapidly even within the span of a human lifetime.

3. Culture can provide the raw material for selection. The average age of fathers is also increasing in many developed regions. Fathers contribute more mutations to their children than do mothers, and the older the father, the more mutations he is likely to transmit. Because mutations are the raw material for natural selection, the cultural trend toward older fathers—along with the already massive and still growing size of our global population—means that our evolutionary potential is continuing to increase.

4. Culture may bias selection. The cues we use when evaluating how attractive we find potential romantic partners have been honed by natural selection to help us find compatible mates. Yet modernization may be interfering with our ability to use them. Online dating apps and websites—an increasingly common way that people find romantic partners, especially among youth—rely heavily on visual information like photographs. Yet women tend to rely on additional cues, including odor. A man’s smell is thought to provide women with information about the quality of his genes and the chances that the two are closely related. The use of technology as an initial step in mate choice decisions may therefore be catering more towards the cues that men have acquired for choosing females partners than the other way around.

There can be no doubt that our species has undergone dramatic changes as a result of our ingenuity and ability to communicate complex information to one another over space and time. But because both our genes and our cultures are passed from one generation to the next, impacting survival and reproduction, both forces—separately and concomitantly—will continue to affect our species long into the future.

Scott Solomon is an evolutionary biologist, science writer, and author of Future Humans: Inside the Science of Our Continuing Evolution. He teaches ecology, evolutionary biology, and scientific communication at Rice University, where he is a Professor in the Practice in the Department of BioSciences. He lives in Houston, TX. 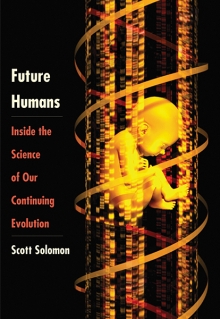