Constitution of the United States of America, licensed for use in the public domain at Wikimedia Commons.

Political equality lies at the core of democratic theory. It is difficult to imagine a definition of democracy that does not include equality in voting as a central standard. Who would support an election rule in which we add up all the votes and declare the person who came in second the winner? But that is exactly what can—and does—happen under the electoral college. In 1876, 1888, 2000, 2016, and, arguably, 1960, the candidate who finished second in the popular vote won the election.

All states except Maine and Nebraska award every electoral vote to the candidate who receives the most popular votes in the state. The winner-take-all system effectively disenfranchises voters who support losing candidates in each state. In the 2016 election, 4.5 million people voted for Hillary Clinton in Florida. Because Donald Trump won 120,000 more votes than Clinton, however, he received all of Florida’s electoral votes. A candidate can win some states by very narrow margins, lose others by large margins, and so win the electoral vote while losing the popular vote. Because there is no way to aggregate votes across states, the votes for candidates who do not finish first in a state play no role in the outcome of the election.

The electoral college violates political equality and at times denies the people their preferred choice for president. Is there any reason to continue such a system in a nation in which the ideal of popular choice is the most deeply ingrained principle of government?

Are There Justifications for the Electoral College?

Are the electoral college’s violations of majority rule just an example of constitutional provisions that require supermajorities to take action, such as the requirement for two-thirds of the senators present to ratify a treaty? No. The framers designed all such provisions to enable minorities to prevent an action. The electoral college is different. It allows a minority to take an action—that is, to select the president. As such, it is the only device of its kind in the Constitution.

The Constitution places many constraints on the actions a simple majority can take. Minorities have fundamental rights to organize, communicate, and participate in the political process. The Senate greatly overrepresents small states, and the filibuster is a powerful extraconstitutional tool for thwarting majorities. There is no justification for awarding interests in certain geographic locations—namely, small states—additional protections in the form of extra representation in the electoral system that citizens in other states do not enjoy.

The framers designed Congress to be responsive to constituency interests. The president, as James Madison pointed out, is supposed to take a broader view. When advocates of the electoral college express concern that direct election of the president would suppress local inter­ests in favor of the national interest, they are in effect endorsing a presidency that is responsive to parochial interests in a system that already offers minority interests extraordinary access to policy makers and many opportunities to thwart policies they oppose.

Is the electoral college a key underpinning of federalism? No. Federalism has little to do with the presidency, the one elective part of the government that is designed to represent the nation as a whole rather than as an amalgam of states and districts. The founders did not design the electoral college on the federal principle. Neither the existence nor the powers and responsibilities of state governments depend in any way on the existence of the electoral college. Moreover, the founders expected electors to exercise their individual discretion when casting their votes. They did not expect electors to vote as part of any state bloc. Federalism is deeply embodied in congressional elections, in which two senators represent each state and in which members of the House are elected from districts within states. Direct election of the president would not alter these federalism-sustaining aspects of the constitutional structure.

Does the electoral college ensure a “proper distribution” of the vote, in which the winning candidate receives majority support across social strata, thus protecting minority interests? Of course not. In 2016 Donald Trump did not win a larger percentage than Hillary Clinton of the votes of women, African Americans, Hispanics, and Asian Americans; voters ages eighteen to forty-four; members of labor unions; those with less than $50,000 annual household income; college graduates and those with postgraduate educations; Jews; liberals and moderates; urbanites; or those living in the East and the West.

It strains credulity to claim that Trump’s vote represents concurrent majorities across the major strata of American society. What actually happened in 2016 was this: the electoral college imposed a candidate supported by white male Protestants—the dominant social group in the country—over the objections not only of a plurality of all voters but also of most “minority” interests in the country.

The Advantages of Direct Election of the President

Direct election of the president would provide the incentive for candidates to encourage all their supporters, and not just those strategically located in swing states, to go to the polls, because under direct election, every vote counts. Thus direct election would increase voter turnout and stimulate party-building efforts in the weaker party, especially in less competitive states. Since there are more swing voters in the smaller markets, and it costs less to reach them than it does to reach swing voters in the large metropolitan markets, only candidates wishing to lose an election would ignore rural areas. Unsurprisingly, candidates do not ignore smaller markets when they campaign within states.

It is possible that some candidates would find it more cost-effective under direct election to mobilize votes in urban areas or to visit urban areas where they would receive free television coverage before large audiences. Such actions would do nothing to undermine the argument against the electoral college, however. Small states receive almost no attention now. Instead, direct election would provide increased incentive for candidates to campaign in most small states, as well as increased incentive for them to campaign in many large and medium-size states. Direct election would disperse campaign efforts rather than deprive small states of them, as we saw in the battle for one of Maine’s electoral votes in 2016.

Some critics of direct election mistakenly claim that it would splinter the two-party system. This assertion is based on the premise that direct election would require a runoff between the two leading candidates, but in reality it would not. Under the electoral college, victorious presidential candidates—including, most recently, John F. Kennedy (1960), Richard Nixon (1968), Bill Clinton (1992 and 1996), George W. Bush (2000), and Donald Trump (2016)—have received less than a majority of the national popular vote about 40 percent of the time since 1824. We have not needed a runoff.

By contrast, direct election would protect the country from the mischief of third parties. The electoral college’s winner-take-all system encourages third parties, especially those with regional bases, because by winning a few states they may deny either major-party candidate a majority of the electoral vote. Such a result was certainly the goal of Strom Thurmond in 1948 and George Wallace in 1968. Imagine giving these racist candidates leverage to negotiate with the leading candidates before the electoral votes were officially cast. Moreover, even without winning any states, Ralph Nader inadvertently distorted the vote and determined the outcome of the 2000 election.

There is no question that instituting direct election of the president will be difficult. Making this change will require amending the Constitution, a complex and time-consuming task. Although the public and many states and organizations support direct election, there are obstacles to change. Principal among them are officials who believe that their states or the members of their organizations benefit from the electoral college. We now know that these officials are wrong. They have reached their conclusions on the basis of faulty premises. Understanding the flawed foundations of the electoral college is the critical first step on the road to reforming the system of presidential selection. The culmination of this effort should be allowing the people to directly elect the presidents who serve them.

George C. Edwards III is Distinguished Professor of Political Science at Texas A&M University. He is editor of Presidential Studies Quarterly and holds the George and Julia Blucher Jordan Chair in Presidential Studies in the Bush School. His books include At the Margins: Presidential Leadership of Congress and On Deaf Ears: The Limits of the Bully Pulpit, both published by Yale University Press. 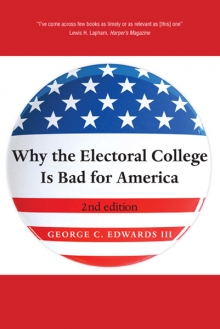