It’s University Press Week and the theme this year is communities. As part of the annual blog tour, we’re taking a look at mass media and its effect on communities and the global village as a whole.

A new form of communication exploded into the early twentieth century, wildly skewing the nature of human connectivity with a sudden force: mass media. The way humans have always related—face-to-face dialogue between neighbors and friends—was expanded by orders of magnitude. With this amplification, elements of the village, whether social or functional, took on new reactive properties, and the world shrank dramatically. Marshall McLuhan, one of the fathers of social media theory, described the universal connective paradigm as a global village: an entire planet of people living as neighbors, suddenly given the tools to speak, or shout, around the world. Humanity was connected from any and every location.

Yet in McLuhan’s time the idea of the global village accounted only for unidirectional mass media like radio and television. Information streamed outward, from privileged content-creators to distributors to passive consumers. Universal communication functioned more as a megaphone than as a telephone, amplifying inherent tensions in society rather than promoting cohesion. McLuhan readily acknowledged that “the more you create village conditions,” the more you generate “discontinuity and division and diversity. The Global Village absolutely insures maximal disagreement on all points. It never occurred to me that uniformity and tranquility were properties of the Global Village. It has more spite and envy. The spaces and times are pulled out from between people. A world in which people encounter each other in depth all the time. The tribal-global village is far more divisive—full of fighting—than any nationalism ever was. Village is fission, not fusion, in depth all the time.” Unidirectional mass media brought a clash of polemics on the global scale.

In the 1980s, soon after McLuhan died, a new connective infrastructure arose that would cause even more sweeping and dramatic changes. The bidirectional connective interface of the Internet became a jumble of top-down and bottom-up energy. More than could ever have been possible through television or radio, people began to share ideas, thoughts, work, obsessions, and intimacies to the widest extent of the network. The choke points of media providers were opened (though not obliterated), and content was democratized to a certain extent. Media became dialogue rather than monologue, and it was at this moment that humanity began coming together as a real village, with shared culture, ideas, and discussion.

People were unified by a pervasive “space of flows.” “There is a new spatial form characteristic of social practices that dominate and shape the network society: the space of flows,” wrote Manuel Castells, the sociologist who coined the term. “The space of flows is the material organization of time-sharing social practices that work through flows. By flows I understand purposeful, repetitive, programmable sequences of exchange and interaction between physically disjointed positions held by social actors.” That is, physical space can no longer be considered absolute. It cannot be divorced from its digital dimension.

Neither could this new system be neutral. The space of flows refers to a merger of virtual networks and material space—one in which digital and physical configurations actively influence one another. But how? What effect would the space of flows have on the physical city? In the looming shadow of the ubiquitous Internet, would the specificity of place have any significance?

A prevailing opinion at this crucial moment in human’s cultural history was that distance would die. Physicality, it seemed, would lose all relevance as it was subsumed by the connective fabric of the Internet.

The argument held that if information can be instantaneously transferred anywhere, to anyone, then all places are equivalent. If I am connected, why does it matter where I am? “The post-information age will remove the limitations of geography. Digital living will include less and less dependence upon being in a specific place at a specific time, and the transmission of place itself will start to become possible,” wrote the MIT Media Lab founder Nicholas Negroponte. Work is a simple example: why commute to the office when the office will come right to your home?

The Internet was expected to neuter place in every dimension of human habitation, from entertainment to employment. Many of the tools for interaction, commerce, and information management were digitized and dematerialized. They became efficient, accessible, and—most significantly—aspatial. The economist Frances Cairncross followed this trend to its logical conclusion with an overt hypothesis that she called the “death of distance.” The Internet would usher in a “communications future . . . in which distance is irrelevant.”

These are resounding predictions, but history (so far) has proven them wrong. Over the past two decades, cities have grown as never before. Urban space has flourished across the globe as humanity rushes headlong into an urban era. Some calculations suggest that the urban population is increasing by a quarter million per day, amounting to a new London every month. The year 2008 was a decisive turning point—when more than half of humanity lived in cities—and growth has only accelerated since. Statistics from the World Health Organization suggest that 75 percent of humans might be city dwellers by 2050, and in China alone, the urban population has risen by more than 500 million during the thirty years since economic liberalization—the equivalent of the populations of the United States plus three Britains. Even by conservative estimates, this constitutes the biggest and fastest shift of humanity that the planet has ever seen. More than ever, cities are human magnets.

Why? It seems that in the collective frenzy of the network, the death-of-distance theorists forgot something crucial to human experience: the importance of physical interaction between people and with the environment. E-topia, written in 1999 by the architect and academic William Mitchell, was somewhat of a repent. Mitchell, head of the MIT Media Lab’s Smart Cities group, illustrated his point with a humorous vignette about a man living at and running a business from the top of a mountain. The man was no less efficient for working at one of the most remote places on earth, but Mitchell concluded, Who could bear to work in that way? This insight is intuitively clear, but it can also be corroborated empirically. Researchers at the Senseable City Lab analyzed telecommunication data and meetings and found that people who communicate digitally also tend to meet in person. People fundamentally want to be with other people, they want to be in a beautiful place, they want to be at the center of it all: people want to live in cities.

“Traditional urban patterns cannot coexist with cyberspace. But long live the new, network-mediated metropolis of the digital era.” Today’s reality is a powerful collision of physical and digital that augments both—a triumph of atoms and bits. “To pursue this agenda effectively, we must extend the definitions of architecture and urban design to encompass virtual places as well as physical ones, software as well as hardware.” Rather than the network subsuming and replacing space, the two are becoming increasingly enmeshed.

In short, the digital revolution did not kill urban spaces—far from it—but neither did it leave them unaffected. The introduction of the Internet, the space of flows, the connective tissue that theorists from Cairncross to Negroponte expected to kill physical proximity, has indeed had a profound impact on cities. Instead of flows replacing spaces and bits replacing atoms, cities are now a hybrid space at the intersection of the two. Physical and virtual are fused through a productive collision, where both propinquity and connectivity play an important role.

The new domain of digitally integrated urban space has come to be known as the smart city. Ubiquitous technology is suffusing every dimension of urban space, transforming it into a computer for living in (paraphrasing Le Corbusier, the early twentieth-century Swiss architect who crystallized the spirit of his time with his iconic concept of machines for living in). The new city is a fundamentally different space—one where digital systems have a very real impact on how we experience, navigate and socialize.

All of this has repercussions in digital space: almost every contemporary action and interaction creates data. Broadband fiber-optic and wireless telecommunications grids are supporting mobile phones, smartphones, and tablets that are increasingly affordable. At the same time, open databases—informal collaborations between citizens and governments—are aggregating and revealing all kinds of information. The resulting profusion of urban big data opens a fertile ground for research, theory, and practice. What could only be inferred from basic surveys or expensive observational studies during the analogue era can now be immediately “sensed” on a tremendous scale. From social science to mathematics to economics, we can now use these data to address deep questions about how humanity lives. Citizens are empowered to think, act, and transform their public space; they are creating a groundswell of urban innovation that is only just rising today. We are witnessing a “reorientation of knowledge and power” in the city as profound as the transformations that the anthropologist Christopher Kelty has described in the virtual world. This is a new era for the global village: an Internet-mediated space of communication and habitation.

From The City of Tomorrow by Carlo Ratti and Matthew Claudel, published by Yale University Press in 2016. Reproduced by permission.

Carlo Ratti and Matthew Claudel carry out research at the Massachusetts Institute of Technology Senseable City Laboratory, investigating the intersection of technology and the built environment. 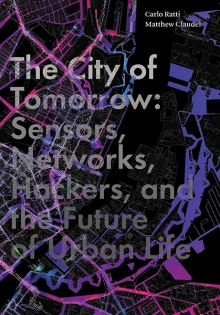