“Trust God, have faith, stick it out.” In the depths of the Great Depression, following years of worry and instability, these words by Norman Vincent Peale were a balm to millions of Americans. They offered hope and encouragement, paired belief in oneself with a sunnier future for all, made religious belief a cornerstone to wealth and prosperity, and urged Americans to find religious solutions to individual and national problems.

From his pulpit in midtown Manhattan, with the aid of a vast publishing empire and media platform, Peale issued weekly reminders that well-being and piety were inseparable. Belief in oneself was unlikely to endure, he warned, without fervent belief in God. Americans were newly encouraged to see themselves as living “under God,” while Go to Church messages cropped up everywhere. Peale tied the nation’s success and growing affluence to its heightened religiosity—in ways that still resonate. His most notorious acolyte, president-elect Donald Trump, appealed to voters in the recent election by offering them the same set of promises and assurances.

With a group of conservative allies in the early 1950s (among them President Dwight Eisenhower and FBI director J. Edgar Hoover, a trove of papers and letters now confirms), Peale imbued such promises with stronger nationalist significance than ever before. The American Foundation of Religion and Psychiatry, the nationwide evangelical organization that he cofounded in this same era, encouraged individuals, politicians, and corporations alike “to accept religiously motivated ideas and ideals as a means of solving problems.” Peale himself was clear about the consequences of pairing positive psychology with conservative populism and nationalism: “Emotion breeds enthusiasm, and enthusiasm is that which is necessary to Christian world conquest.”

After throwing his considerable weight behind Senator Joseph McCarthy on the need to expose “subversives” in the federal government, Peale broadcast his upbeat message in The Power of Positive Thinking. This runaway bestseller, which for two years rivaled the Bible in sales, opened by urging the reader, “Believe in Yourself! Have faith in your abilities!” Peale quickly pivoted to insisting, as in all his other writing, that the faith be religious in character. To maintain it, readers could try “prayer power,” which would aid the nation’s “spiritual mobilization.” The minister was part of a nationalist movement promising “freedom under God” and encouraging Americans to think of their elected representatives as providing nothing less than “government under God.”

By turns pep talk, sermon, and sales pitch, Peale’s book on positive thinking made reference to God ninety-one times, with forty-nine further allusions to the Bible. Originally titled The Power of Faith—and retitled, according to Peale, after some personal reluctance—the book devoted a large portion of its pages to evangelizing. Over and over, Peale stressed, religious belief was a necessary condition for belief in oneself and the nation. Already he had publicly berated President Franklin D. Roosevelt for being “indifferent to religion” and warned America, “The man who shows no interest in Christianity and fails to support it is the real enemy of our social institutions.”

By repeatedly equating commercial acumen with piety, uncertainty with religious doubt, and personal and cultural failure with collectivism and godlessness, Peale and his admirers helped redefine religious Americans as socially superior winners (the “better people,” he once called them). By 1957, anything resembling “a low opinion of yourself” had come to seem anathema, “an affront to God.” Spotlighting the normally hidden underside to positive psychology, Peale warned the nation, “Never entertain a failure thought.” He would tell those prone to such thinking, “[Y]ou’re disintegrating. You’re deteriorating. You’re dying on the vine.”

After decades of attending Peale’s services, Trump named Peale and his writings among his strongest influences. Marble Collegiate Church has since disowned the president-elect, largely because of his excesses on the campaign trail, but Peale’s influence persists in Trump’s careful tying of optimism and renewal with Christian nationalism.

One consequence is continued expansion of the equating of health and wealth with religious salvation. Another, directly related, is that failure and disappointment result from inadequate faith in oneself, God, and the nation. Just as Peale did in the 1950s, Trump declared in January 2016: “Christianity, it’s under siege.” The president-elect pledged to “protect” the religion as president. According to election data, white evangelicals voted for Trump by an 81-16 percent margin, mainline Protestants by 58-39.

Peale half-counseled, half-preached that religious faith was essential for the achievement of wealth and success. Trump’s even broader message is that national success and affluence appear “blessed,” religion being the path to personal and national redemption. The unbelieving and the differently religious may wonder if they have any real presence in this vision of America. In his recent Union League speech in Philadelphia, the president-elect made a statement bearing equal parts promise and threat: “We will be one nation, under one God, saluting one flag.”

Christopher Lane, a professor of English at Northwestern University, has received fellowships from the Guggenheim and Mellon Foundations. His writing has appeared in numerous national publications, including the New York Times. He is the author of Surge of Piety: Norman Vincent Peale and the Remaking of American Religious Life. 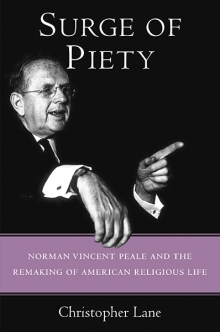