Americans are saying good riddance to the ugly 2016 campaign. Many believe that Donald Trump, having won, will cease the shock-jock talk and govern as the pragmatic businessman he purports to be. Most experts predict that Trump, like every president before him, he will be constrained by the Congress, judiciary, warring bureaucracies, and uncontrollable foreign powers. Thus did Harry Truman famously say of the general succeeding him, “Poor Ike: He’ll say do this and do that and nothing at all will happen.” Opponents and many supporters alike hope the same will be true of a splenetic, impulsive President Trump.

However, the truth is our long, national nightmare is far from over, regardless of Trump’s performance, because the demographic and economic shifts that caused this year’s political earthquake remain. The widespread resentment of political correctness, open borders, and globalization will only increase as the elites who control the levers of power push back or co-opt the Trump administration. No doubt international banks, multinational corporations, transnational foundations, non-governmental and international organizations, and their intellectual publicity agents in think tanks, universities, and the media have already started to plan how to frustrate dangerous atavistic nationalism in Europe and now America. So what appears now to be a populist victory over globalization may turn out to have been the pathetic yawp of believers in a dying American Civil Religion (ACR) that has morphed since the end of the Cold War into an abortive Global Civil Religion.

This year the Internet has been drenched with speculation about what the Trump campaign means for the ACR that was first described by sociologist Robert Bellah fifty years ago. A Google search for “Trump and American Civil Religion” or “Trump’s civil religious rhetoric” yields a plethora of thoughtful, informed articles and blogs that nevertheless could not disagree more about what that meaning may be. Some are obituaries because their authors suspect Trump has repudiated the idealism characteristic of ACR. Others argue that Trump represents the worst variety of ACR: the chauvinistic Captain America culture that demonizes “the other” and promises only that Americans will start winning again. Still others suggest the Trump campaign is the logical outcome of a civil religion that identifies the United States as a new Promised Land inhabited by a new Chosen People blessed by the Almighty with power and prosperity. Now, civil faith is a powerful glue that can help a large, diverse people cohere in good times and bad. But once untethered from the Biblical message that even (or especially) a chosen people come under judgment when they abandon God’s commandments, civil religious solipsism based on vox populi vox dei theology becomes destructive, even suicidal.

Is that the case with the worldly, egoistical Trump? He says his favorite Bible verse is “an eye for an eye and a tooth for a tooth,” the lex talionis which he probably considers a mandate for vengeance (but in fact sternly limits it because “vengeance is mine, sayeth the Lord”). Not that Trump was unchurched. His family attended Marble Collegiate in New York City, a Presbyterian congregation presided over by Norman Vincent Peale, the best-selling author of The Power of Positive Thinking. Donald might have learned no theology from Peale or his strong-willed father, but he evidently absorbed a prosperity gospel that, so far as it goes, is very compatible with ACR. But the evidence of Trump’s spiritual life is still thin, and the campaign taught us nothing. Rarely do candidates get more specific than “God bless America,” lest they sound sectarian, and they appeal to specific constituencies only through issues (such as the strong pro-life stand taken by Trump in the third debate). The real proof of his ACR piety will be revealed at his inauguration, for that is the moment when presidents assume the high priestly mantle and usually reassure the whole nation of their ACR orthodoxy. Just view the videos of Barack Obama’s second inauguration, a patriotic liturgy so “high church” it even eclipsed the second George W. Bush inaugural.

What Bellah meant by civil religion was the general belief in a transcendent, spiritual reality guiding the nation through space and time like God led the Israelites, a cult embodied in myth, ritual and symbol, and a vaguely Unitarian faith ritually invoked by its presidents and other leaders. That transcendent, spiritual reality is what distinguishes civil religion from nationalism and other secular ideologies. Americans never worshiped their government, a fact made palpable by the checks and balances of their Constitution. Rather they worshiped the deity who made them one out of many (e pluribus unum), a new order for the ages (novus ordo seclorum), and blessed their undertakings (annuit coeptis). Consider it a divine right republicanism that replaced divine right of kings.

However, since Bellah did not delve deeply into the phases of American history, he missed the fact that at least three ACRs, or competing orthodoxies, evolved over time as the nation grew into a world power and various sectors came to dominate its economy’s commanding heights. During the nineteenth century, when most white Americans were farmers, merchants, craftsmen, and professionals (in short, proprietors), a Classical ACR preached prudence, frugality, federalism, modest self-government, and a foreign policy focused only on expansion in North America. The Civil War brought wrenching change, but the same list of virtues animated American politics down to the 1890s. By then, however, industrialization, urbanization, and mass immigration radically changed American economics, social composition, and dominant culture. People who were once self-employed went to the cities and turned into dependent employees of big corporations. Pathologies familiar to us today such as racial and ethnic strife, drug and alcohol addiction, and crime and killing tormented the cities. Political, academic, and clerical elites adjusted to industrialization by presiding over a new “church,” a Progressive ACR in which bureaucratic regulation, public spending, overseas imperialism, and crusades to make the world safe for democracy—forbidden fruit under the old dispensation—became holy sacraments. To be sure, Woodrow Wilson’s utopian project ended in carnage and disillusionment and was followed a decade later by that plague of locusts, the Great Depression. So Americans stumbled through twenty years confused about their ACR, conflicted as to what God intended their sacred nation to do in the twentieth century.

Not even Franklin Roosevelt’s dogged revival of Progressive ACR during World War II sufficed to answer that question. The outbreak of Cold War did. After 1945 the United States exercised a veritable hegemony over much of Eurasia, the Americas, and the oceans between. So when the Soviet Union threatened rather than joined the U.S.-led new world order, the Truman, Eisenhower, and Kennedy administrations rallied a broad consensus behind a militant ACR. God called Americans to lead the Free World and rewarded them for it with unprecedented prosperity. From the late 1940s to the early 1970s even the working classes saw their wages, security, political clout, and dignity soar to unprecedented heights. They in return formed the patriotic base who willingly paid taxes, waved flags, and gave their sons to the military. They believed their elites when they promised nothing less than a united humanity and perfect society, a New Jerusalem and heaven-on-earth sure to arrive on that glorious day the Communist bloc collapsed.

What middle-class and blue-collar Americans did not perceive was the ascent during those decades of the post-industrial financial sector to the commanding heights of the once national, now increasingly global, economy. That sector counted on free flows of capital, goods, ideas, and people across borders and thus had contempt for national sovereignty and messy democracy. Fast forward to the twenty-first century. Trump voters may be distinguished by various, sometimes contradictory, traits to be expected of 47% of the electorate. But it is safe to say nearly all are nostalgic or subconscious believers in the Progressive ACR which stipulated American exceptionalism and used to provide them with opportunity and affirmation of their traditional values. Some may even be nostalgic or subconscious believers in the old Classical ACR. President Benjamin Harrison, elected in 1888, admonished Americans that riches were not what exalted them. “It is a pure, clean, high, intellectual, moral, and God-fearing citizenship that is our glory and security as a Nation.” The centerpiece of his moral economy was the tariff because it protected the jobs and elevated the wages of workers. “God forbid,” said Harrison, “that the day should ever come when, in the American mind, the thought of man as a ‘consumer’ shall submerge the old American thought of man as a creature of God, endowed with ‘unalienable rights.’”

The Trump phenomenon burst through this year because the Progressive and financial elites tried to shove extreme agendas down the throats of threatened people whose real wages had stagnated for thirty-five years, and because the “end of history” Global Civil Religion promised after the Cold War was over has failed. But the Trump election does not signal the beginning of some whole new era. It is likely the last hurrah (to quote Ronald Reagan’s prophecy about Marxism) of “a chapter in human history whose last pages are even now being written.”

Walter A. McDougall is professor of history and the Alloy-Ansin Professor of International Relations at the University of Pennsylvania. His numerous books include the 1985 Pulitzer Prize winner The Heavens and the Earth. He lives in Bryn Mawr, PA. 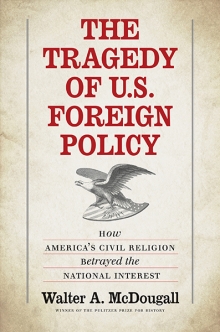