In the early 1970s, the six Sunni Muslim monarchies of the Arab Gulf—Saudi Arabia, Oman, the United Arab Emirates (UAE), Qatar, Bahrain and Kuwait—took control of their own fortunes. Since then, they have used their oil and gas wealth to pursue stability at home and influence abroad. In the process they have undergone a remarkable socioeconomic transformation, unparalleled anywhere in the world except perhaps in parts of coastal China. Countries that only fifty years ago had no towns or cities with populations exceeding 15,000 are now bustling centers of international commerce and finance, home to state-of-the-art infrastructure, major international sporting events, and world-class museums and galleries.

Across North Africa, in the Levant, and on the shores of the eastern Mediterranean, the traditional heartland of the Arab world, one can see the fruits of their influence all around. If the Gulf States are the new Arab powerhouses in the Middle East, they are also major players in the wider Muslim world beyond the authority and legitimacy that Saudi Arabia derives from its special position at the heart of Islam. In Sudan, one of Africa’s biggest nations, and in Turkey and Pakistan, as well as in a host of smaller Muslim nations, the political and economic influence of the Gulf States is extensive. In key emerging markets like China and India, the Arab Gulf States are now also leading investors in tourism, finance, energy, construction, and agriculture, playing a key role in shaping urban and rural landscapes for decades to come. In the West, they have taken major stakes in prominent companies, prime real estate, top financial institutions, and luxury brands. They have also financed the construction of some of the most noted new buildings, stamping their presence on some of the world’s great skylines.

These achievements have earned the Gulf States the recognition of the entire international community, and ambitious rulers have attempted to capitalize on this by turning their home regions into connecting hubs between East and West at the heart of the globalized world. Whether this can last is the live question. Some believe it cannot: they argue that the elevated position of the Gulf States will never endure because, both individually and collectively, they lack the indigenous populations, military might, ideological appeal, and technocratic and political skills to turn their wealth into lasting influence. Others argue that changes in the energy market will herald the demise of the Gulf region, a region that is home to more than half of the world’s oil reserves and over a third of its natural gas.

Such challenges are real. The success of the sovereign Gulf States has been based on their capacity to redistribute oil revenues to various interest groups and stakeholders in society and to transform the remaining oil surpluses into valuable assets such as real estate, art, stocks, and shares. This is no longer sustainable on the same scale and makes it imperative that the Gulf States diversify their economies away from reliance on oil revenues. But this does not in itself foretell the end of their global influence, never mind their demise as important players on the regional level.

Since the boom years of the 1970s, these states have overcome the revolution in Iran and the brutal war between Iran and Iraq during the 1980s that threatened to tear asunder all that they had achieved in the previous decade. At the start of the 1990s, with the backing of almost the entire international community, they overcame the threat and trauma of the Iraqi invasion and occupation of Kuwait. Exactly a decade later, they weathered the maelstrom and rising domestic insecurity following the 9/11 terror attacks on America and the subsequent U.S. invasion of Iraq. During the Arab Spring, the Gulf States demonstrated a deep commitment to upholding the status quo in their home region. They also exhibited a new willingness to take a leading military, economic, and diplomatic role across the wider Middle East to protect both individual and collective interests when necessary. On each of these occasions of profound regional turmoil, the Gulf States have adapted to meet the challenges, and in doing so, they have solidified their status as key Arab political players, both regionally and globally.

On the other hand, since the Arab Spring local rulers have come to realize that their legitimacy is increasingly dependent on their capacity to deliver a more productive and competitive economic base, more and better private sector jobs, and an entrepreneurial business environment that has been all too absent from the region in the modern era. As the recent establishment of a ministry for youth in Kuwait acknowledges, this also requires a greater willingness to address the mounting concerns of frustrated young populations, who lack opportunities in society and are ripe for further alienation unless properly engaged.

These difficult tasks are complicated by the fact that rulers must also navigate a middle way between those who demand greater modernization and those who fear the loss of local culture, religious identity, and traditional values. Complex as it is, if rulers can succeed in balancing the interests of these opposing forces in ways that bring sustainable economic development and prosperity, their legitimacy will be further consolidated, and they will ensure continued stability at home and influence abroad for future generations.

Rory Miller is professor of government at Georgetown University’s Edmund A. Walsh School of Foreign Service in Qatar. He advises various governmental and private organizations on issues relating to Gulf security and socioeconomic development. He lives in Qatar. 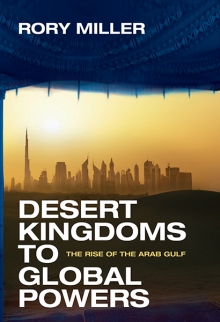