Evident signs of neglect of the Centre Georges Pompidou. Photos by Elena Romani, 2015.

Renzo Piano and Richard Rogers’s iconic Centre Pompidou in Paris will celebrate its 40th anniversary in January 2017. Francesco Dal Co, author of our newly published book on the building, penned an open letter to President Hollande calling for the restoration of the Parisian landmark, parts of which are now in a state of disrepair.

On 31 January 2017 forty years will have passed since the day when your predecessor, Valéry Giscard d’Estaing, opened Centre Georges Pompidou, named to commemorate the President of the Republic who decided to build it. The Beaubourg is a building that fully embodies the purpose Georges Pompidou wanted to achieve: to construct an “ensemble architectural et urbain qui marque notre époque.”  If the completed facility corresponds to this objective, it is due above all to its architectural conception.

Today, Mr. President, Centre Pompidou, in spite of its enormous popularity, is in a state of health that should cause concern. Those who visit it and observe it from the outside come across signs of decay that are hard to justify or to tolerate.

As it was conceived, it was inevitable that the Beaubourg would undergo continuous transformations. Adaptation to those changes was one of the objectives of the architects, as well as their client, a goal set right from the moment, in 1971, when work began on the project. But now the process seems to have gotten out of hand. The transformations – bizarre, in certain cases, it must be admitted – to which the internal spaces have been subjected have wound up erasing their original configurations and, above all, the possibility of understanding their unusual coherence. Even more worrisome is the fact that neglect is now threatening the posts, the beams, the gerberettes, the conduits that give such an original character to the elevations of the building. This work was born as an accommodating container of activities destined to change over time. If its decay is allowed to advance, it is probable that in the near future it will no longer be able to perform this task, the memory of which runs the risk of being lost. For this reason, Mr. President, I ask you if you do not think the time has come to proceed with a radical restoration of Centre Pompidou, enabling it to again play the role for which it was built, namely to accommodate, over the next forty years, the emanations of the times to come. To Georges Pompidou, who speaking of his predecessor, General De Gaulle, observed “quel dommage qu’un aussi grand homme n’ait pas laissé de monument,” the 20th century owes a work of architecture that has aptly accompanied its final decades. It would be truly to your credit, Mr. President, if you would do all that is in your power to restore to Paris, to your country and to all of us Centre Pompidou as it appeared on 31 January 1977 to those who attended its opening. Our hope is to be able to take part, with you, in a new opening ceremony for Centre Pompidou, restored to its original state, on 31 January 2017.

Francesco Dal Co is professor of history of architecture at the Istituto Universitario di Architettura Venezia (IUAV) and director of the architecture magazine Casabella. His many publications include Modern Architecture(with Manfredo Tafuri) and Figures of Architecture and Thought. 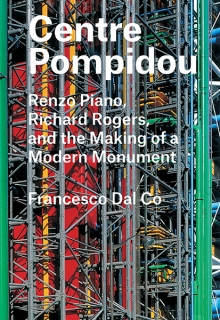