Matthew Affron and Mark A. Castro–

Paint the Revolution: Mexican Modernism, 1910-1950, an exhibition that focuses on an extraordinary moment in the history of modern art, opened in October at the Philadelphia Museum of Art (PMA). The show is the product of a partnership between the PMA and the Museo del Palacio de Bellas Artes (MPBA) in Mexico City, two institutions with deep connections to the subject dating back to the period under examination.

The Palacio de Bellas Artes opened in 1934 as Mexico’s first permanent fine arts museum. In that first year, the Mexican government commissioned murals for the building’s atrium from Diego Rivera (1886–1957) and José Clemente Orozco (1883–1949), two of the nation’s leading artists, and works by David Alfaro Siqueiros (1896–1974) and Rufino Tamayo (1899-1991) were added soon after.

The PMA started making inroads into collecting and exhibiting modern Mexican art in the same period. In early 1932, it presented The Museum of Modern Art’s retrospective of the work of Diego Rivera, and in 1943 Henry Clifford, the PMA’s curator of paintings, organized the blockbuster traveling exhibition Mexican Art Today in collaboration with Inés Amor, a gallery owner and the chief promoter of modern art in Mexico City. The latter exhibition provided audiences in seven U.S. and Canadian cities with a broad look at contemporary Mexican art, and it catalyzed a collection of modern Mexican paintings, sculptures and works on paper at PMA that is among the most extensive in any U.S. institution.

Inspired by these legacies, a team of four curators worked together to design and mount Paint the Revolution: Matthew Affron, The Muriel and Philip Berman Curator of Modern Art at the PMA; Mark A. Castro, Project Assistant Curator at the PMA; Renato González Mello, Director of the Instituto de Investigaciones Estéticas at the Universidad Nacional Autónoma de México; and Dafne Cruz Porchini, Postdoctoral Researcher, Colegio de México, Mexico City, for the MPBA. Together they laid the foundation for an exhibition that broadly explores modern art in Mexico in the first half of the 20th century.

In the decades following the Mexican Revolution of 1910-20, the arts in Mexico entered a period of dramatic experimentation that paralleled larger cultural changes happening across the country. The exhibition’s title alludes to the momentous effect of those years; it is taken from the headline of an essay by the American novelist John Dos Passos, who traveled to Mexico City in 1926-27 to visit murals by Rivera, Orozco, and Roberto Montenegro (1885-1968). Dos Passos described the murals as a new type of modern art for a mass public, a dramatic fusion of aesthetic innovation with activist politics.

For a long time, the mythology of political modernism in Mexico brought the great muralists Rivera, Orozco, and Siqueiros to the fore, though certain star artists, most notably Frida Kahlo (1907-1954), also achieved great renown. Paint the Revolution proposes that these great figures cannot be properly understood if they are separated from a broader and deeper history. Seventy artists and some 280 works of art demonstrate that Mexican modern art, a leading facet of the broader culture that developed in the wake of the country’s revolution, was framed by a broad range of compatible and competing values: the individual and the collective, the democratic and the elite, the social and the formal, and the epic and the lyric.

The central themes of the exhibition are elaborated in a richly-illustrated catalogue that contains full-color reproductions of all the works in the exhibition as well as fourteen essays by scholars working in both Mexico and the U.S. The essays present a wealth of new research on mural and easel painting, printmaking, photography, film, and architecture; diverse artists’ groups; and the involvement of the Mexican state in culture during this rich period. The volume promises to become a major new resource for understanding this complex and fascinating moment in the global story of modern art.

Matthew Affron is the Muriel and Philip Berman Curator of Modern Art at the Philadelphia Museum of Art.

Mark A. Castro is Project Assistant Curator at the Philadelphia Museum of Art. 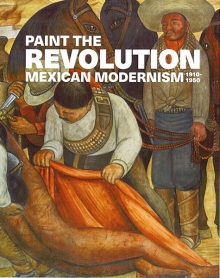