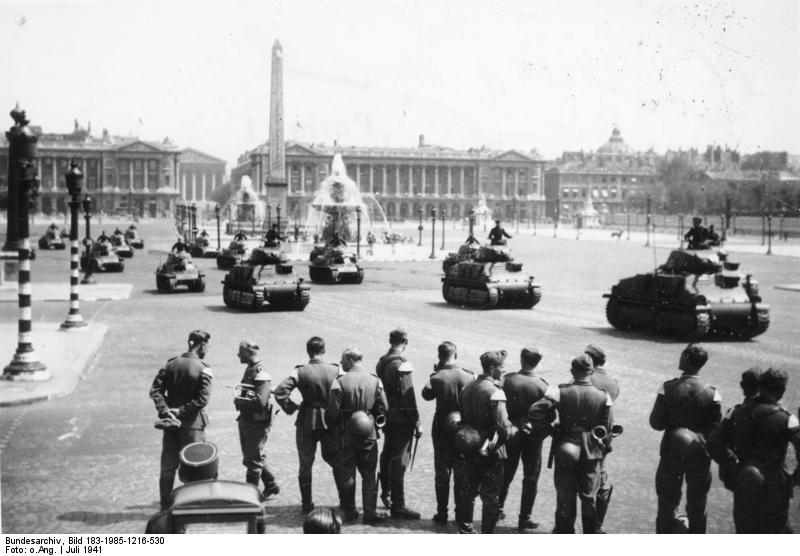 Large military parade at the Champs Elysees, 1941, licensed for use on Wikimedia Commons.

The French word étranger means both “foreigner” and “stranger,” meanings that overlap but are not synonymous. One can be a stranger to a community or group without being a foreigner, while some foreigners are not strangers to a given individual or group—many people have foreign friends. But both words carry connotations of difference, and possibly exclusion, from the majority group or the nation. The foreigner does not have the right passport (if he has one at all), or the right accent or way of dressing or behaving, while the stranger does not quite fit in, even if she looks and speaks like others and tries hard to be one of them. Occasionally, the stranger will not try to integrate, preferring instead to cultivate her feeling of difference. In all their varieties, foreigners and strangers are outsiders—perceived as such by others, and in most instances, by themselves as well.

Historically, Jews have been the quintessential étrangers in European culture. Very often they were foreigners, given their frequent displacements across national borders as they fled pogroms, poverty, and revolutions in Eastern Europe in the nineteenth century, followed by more of the same after the two World Wars. For much of that time, they were also seen as strangers, even when they stayed in place. This was true even in countries where they had been granted full status as citizens, as happened in France after the Revolution and in England, Germany, and the Habsburg Empire in the nineteenth century.

Foreigners and strangers proliferate in the fiction of Irène Némirovsky, and for good reason: she was a Russian Jew (born in Kiev in 1903) who had fled Russia with her parents after the Revolution and settled in France while still a teenager. Némirovsky is known today primarily as the author of Suite Française, the international bestseller that wasn’t published until sixty years after her death. But in her lifetime she became famous at age 26, with the publication of her novel David Golder (1929). It tells the story of a Russian Jewish businessman who leaves home as a young man and succeeds in fighting his way to being a millionaire, but who is no happier for all that—a familiar story in American fiction as well. Némirovsky went on to write a dozen more novels and many short stories, becoming the most respected woman writer of her generation in France. That did not prevent her from being deported from France in 1942, as a “foreign Jew.” She died in Auschwitz a month later.

Némirovsky has been accused of being a “Jewish antisemite” whose portrayals of Jewish characters reek of self-hatred. This reading is too simplistic, however. Only a small number of her works feature Jewish protagonists, but they are among her best. In her fiction, Némirovsky emphasizes the difficulties and contradictions of Jewish existence, not only in repressive Russia but also in the more liberal West. Her most searing insights, like those of many other Jewish writers of her time and place (and of our time as well), concerned the obstacles, both internal and external, to Jewish attempts at assimilation. Her Jewish characters, who are generally divorced from religious practice, manifest both a strong desire to belong to the non-Jewish world and an equally strong sense of estrangement, the causes of which are to be found both in heir own psyche and in the antisemitism that surrounds them. What Némirovsky emphasizes again and again is that they are estranged not only from the majority culture, but also from other Jews who remind them of their Jewish roots by exhibiting “Jewish traits” they feel ashamed of. It is this estrangement experienced by Jews from other Jews that some people call “self-hatred” or “Jewish antisemitism.” But the fact is that it existed, and continues to exist, not only among Jews but among other minorities that may feel vulnerable—and not only in Europe. African-American theorist W.E.B. Dubois coined the phrase “double consciousness” to describe the split subjectivity that occurs in members of such a minority, as they interact with their own group or with the privileged majority.

Némirovsky was painfully aware of this phenomenon, becoming what one might call the chronicler of “Jewish self-hatred” from the inside. In this she was similar to Proust, who has also been accused of antisemitism, and Kafka, among other modern writers—Kafka who once wrote to his non-Jewish lover Milena that he would like to “stuff the Jews” (including himself) into a drawer and suffocate them. But at the same time, he toyed with the idea of learning Yiddish and moving to Palestine! This was an acute, debilitating ambivalence and conflicted identity, allied with a fundamental pessimism about the future. Would Jews ever be considered full members of their non-Jewish national communities?

Némirovsky’s answer to that question was no, and all the more so as the 1930s moved toward their disastrous close. Instead of tarring her with the label of self-hater or antisemite, we do best to consider her as a Jew who knew exactly where to pour the salt on the deepest wounds of Jewishness—in other words, who was intimately familiar with the feelings of anxiety and existential unease, coexisting with equally strong feelings of pride, ambition, and irony toward non-Jews as well as toward oneself, that she depicted and analyzed in her Jewish characters. These inner contradictions are nowhere clearer than in the protagonist of her short story “Fraternité” (1937), Christian Rabinovich, whose name says it all. But we also see it in the three main protagonists of her late novel The Dogs and the Wolves, who are members of the same family yet make widely divergent choices in relation to Jewishness. Finally it comes down, in her view, to this: no matter how hard a Jew tries or desires to be neither a foreigner nor a stranger in the country where she lives, she will never succeed completely, or for long; the reason is both internal (the long history of Jewish persecution, the heritage of fear and anxiety that is the psychological lot of every Jew) and external (the refusal of the majority to fully accept the Jew).

Susan Rubin Suleiman is the C. Douglas Dillon Research Professor of the Civilization of France and research professor of comparative literature at Harvard. She lives in Belmont, MA. 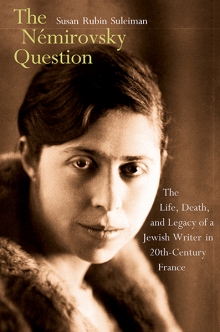