Consider the following stereoscopic photograph, taken by the famous travel photographer James Ricalton in 1900 and published by the popular distributor Underwood and Underwood in a box set called China Through the Stereoscope.

On first glance, the photograph appears to be a typical example of orientalist travel photography from the era. A busy street market is filled with seemingly exotic clothing, shoes, and other items. Yet Ricalton’s accompanying text directs the viewer to something that might easily be missed: a flag of the Young Men’s Christian Association staked on one of the building facades, perched over the street.

This branch of the YMCA, Ricalton explains, was only recently erected, a direct result of the Boxer War. In the summer of 1900, thousands of Chinese peasants—believing that they were invincible to bullets—flooded into Beijing and laid siege to the foreign quarters in the city. The Boxers (a label given to them by Western missionaries) sought to expel foreigners from China, convinced that the foreign presence had angered the gods and brought upon years of drought and famine. The siege resulted in the deaths of hundreds of Americans and Europeans, including the German minister in China, and sparked an international outcry. Eight nations formed an international alliance and deployed troops to China. Within two months, the siege was broken, and a retaliatory expedition followed—the allied troops fanned into the countryside, razing villages and killing thousands in their hunt for Boxers and their sympathizers. The Boxer War ushered in the twentieth century with violence, foreshadowing the bloodiness that was to come.

Ricalton took the photo while accompanying the American military expedition. American troops had occupied a “notorious gambling and opium den,” as he put it, expelled its inhabitants and customers, and gifted the building to the YMCA. Ricalton called the newly-purposed building a “commendable example of applied Christianity”: it offered room and board for the international troops and helped to prevent them from “patronizing the dens of infamy with which every Oriental city is so well supplied.”

Beneath the flag, a young Chinese man occupies the center of Ricalton’s photo. (You can find a different version of the same scene, where instead of an individual, there is a crowd.) His scowl—and his traditional clothing—renders him a representation for China as a whole: the man’s hostility to the camera is a stand-in for China’s suspicion to the West. The Boxer Uprising was the last gasp of traditional China’s resistance to the march of progress: “During the recent Boxer uprising,” he wrote, “we have witnessed this oldest of the world’s empires, proud of her history and tenacious of her time-honored civilization, hurling back the encroachments of modernism.” For Ricalton, it was up to institutions like YMCA to transform China and bring it into the modern world. This photograph is not an outlier in his work—throughout his photo journey of China, Ricalton consistently presented China as “timeless” and “unchangeable” China, in contrast to the dynamic, progressive West.

Ricalton’s photographs belonged to a broader cultural moment of Sinophobia, when the Western media depicted China as a threat, and fears of the Chinese abounded. Ricalton’s images were but a mild form of Sinophobia. The most dramatic and racist iterations of anxieties over China came in the trope of the “Yellow Peril.” Novels, plays, and films depicting the “Yellow Terror” flooded the market.

As numerous scholars have pointed out, central to the trope of the Yellow Peril is a certain fascination and sexualization of the Chinese body: the Chinese male body—dirty and degenerate—is juxtaposed against the defenseless and virginal white woman. The fears were sparked not only by a spectacular international event of indigenous uprising, but also fanned by the arrival of Chinese immigrants in Europe, America, and Britain. Such images are familiar to us and have long afterlives: Sax Rohmer published his first Fu Manchu novel in 1913, and the character of the evil Chinese mastermind, with tentacles extended throughout the world, continued with several popular movies in the late 1960s (Fu Manchu was memorably played by Christopher Lee) and still has resonance today.

Consider two other paintings, produced by artists from the Beijing Sacred Heart Church Department of Fine Arts Catholic University in the 1930s and the 1940s. Both recast familiar Biblical stories within a traditional Chinese setting. The first, by the painter Hua Xiaoxian, reimagines the adoration of the Magi, with the magi dressed as Confucian scholars. In the other, Bai Huiqun depicts Jesus with Martha and Mary. Jesus himself adopts the pose of the traditional Confucian sage, bestowing knowledge and wisdom. You can see more images produced in the same vein at the “Celestial Icons” online exhibition, hosted by the Ricci Institute at the University of San Francisco.

One can read the images as a subversion of the “Yellow Peril” trope. No longer are Chinese bodies sexualized or depicted as depraved. Jesus himself is portrayed as a Chinese man, a dramatic transformation from earlier missionary depictions of Jesus. In the early 1900s, for the most part, Christian missionaries were no different from their secular counterparts. They assumed broader Sinophobic attitudes, believing that Christianity would eventually replace traditional Confucian culture. Yet by the 1930s and 1940s, they began to see Christianity and Confucianism as compatible, rather than as oppositional.  In the 1930s and 1940s, Western missionaries and Chinese Christians begin to argue for a synthesis of Christianity and Confucianism. This is not to say that Sinophobia completely disappeared, but it did begin to decline. When it persisted, it was transmuted and adopted different forms—missionaries instead focused on other enemies, such as Chinese Communism or Buddhism. By focusing on these cultural transformations, we see how quickly certain attitudes can change: even supposedly stable concepts like “civilization” can be rapidly revised. These stories of sinophobia and sinophilia show us how our ideas about other cultures are constantly in flux, shaped by broader economic, social, and political forces.

Albert Monshan Wu is assistant professor of history at the American University of Paris. He writes regularly for the Los Angeles Review of Books and Commonweal. He lives in Paris, France. 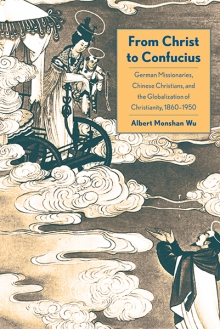