I’m often asked what are some misunderstandings people may have about North Korea. For this article, I’d like to expand that question out to lessons I learned and observed throughout the process of trying to better understand this country.

Myth: North Korea is a monolith.

North Korea—as a state and as a population—is not a monolith. Defectors do not comprise a block demographic either. People who have escaped this country come from different sociopolitical backgrounds, different parts of the country, with different professions and experiences. Over 80% of the 30,000 defectors who have settled in South Korea come from two of nine North Korea provinces. Just as there is a diversity of opinion among any given group of people—women, Americans, college students, fathers, puppy-lovers—there is, of course, a diversity of opinion and beliefs among North Korean citizens and defectors.

Myth: There has never been violent resistance against authorities.

North Korea does have a history of isolated instances of failed coups, assassination attempts, violent riots, and local arguments with authorities. It is not a country where 100% of the people follow the rules all the time. I’m not arguing that a Pyongyang Square will transpire anytime soon. But it’s important to debunk the myth that the government has absolutely control over every crevice of the country.

Myth: The North Korean government provides for all citizens.

The North Korean government does not support its people through a public distribution system. Most people now depend on business and private market activity to make money and support themselves. In much of the country, North Korean millennials have grown up asking their parents for money to buy food, clothes, accessories, and other items in local street markets. They no longer stand in line with ration cards to collect their necessities from the state’s public distribution system, a system that collapsed over two decades ago. North Korean defectors comment that Kim Il-Sung, the founder of socialist North Korea, would not be able to recognize North Korea today because of the widespread private marketization of the country.  Defectors will often say one can buy everything but a cat’s horn on the North Korean markets.

In North Korea’s Hidden Revolution, you’ll meet a young man named Joon-Hee (name altered) who told me that he received only one item from the state while he lived in North Korea. Twice in his life, he received school uniforms, but they were too big. He was too embarrassed to wear the uniforms because they were too thin and the red scarves wrinkled too easily. His mom went to the street market to buy the “fancy, expensive” red scarves that were “nice and stiff. They wouldn’t wrinkle or crease.”

I think it’s important to keep in mind that people who escaped North Korea are everyone’s equals. Most have lived unimaginably difficult lives. But they are also defined by so much more than the labels of “defector” or “North Korean.” They’re people with agency and preferences, and they do not comprise some imaginary singularly defined group of people. Remembering not to sensationalize, glorify, or exoticize defectors is important, even if it comes from a good place. Remember that North Korean people are just that—they’re people.

Myth: The North Korean government has a complete information monopoly.

The government-enforced information blockade to shield North Korean citizens from outside influence is eroding. Consumption or possession of unauthorized foreign information and media is considered a crime against the state and can be punished with high fines, hard labor, sentences to political prison camps, or the death penalty.

Despite these draconian and often fatal consequences, increasing numbers of North Korean citizens are seeking access to foreign information and media. As people are exposed to more information that is contrary to the state propaganda they have been taught since birth, small changes are taking place across the country. Seeds of doubt of the regime and propaganda are being planted in their minds. Foreign information is opening up people’s minds, changing people’s preferences, and enabling people to think through more choices. Young people are taking more risks than ever before. People are trusting each other, watching each other’s backs, and building stronger bonds. The widespread grassroots marketization and unprecedented levels of access to foreign information now play a central role in changing the social consciousness of some North Korean citizens and are sparking subtle, yet irreversible, changes inside this country.

Myth: The country is a hopeless, impenetrable black box.

Despite all the challenges that North Koreans face while living inside North Korea, and, for some, while escaping the regime and living in a new country, they have proven themselves to be an extraordinarily resilient people. There is hope for positive change to emerge from inside this country. The people are the proof.

I hope North Korea’s Hidden Revolution can shift the public narrative and perception of North Korea from being a hopeless case to being a country that comprises individual citizens, some of whom are experts at the art of survival and who are adapting to changes in the flow of information and markets.

In the book, you will meet Ha-Young (name altered) who defected from the North Korean town of Musan, and now lives in Seoul. She told me over coffee, “People say mountains change in about ten years…[and] if mountains can change, humans can change. North Koreans are humans too. Just like you and me…North Koreans can and will adapt to newer, better circumstances. I’m sure of it.”

Jieun Baek is a Ph.D. candidate in Public Policy at the University of Oxford.  Previously, she was a research fellow at the Belfer Center for Science and International Affairs at Harvard University where she wrote North Korea’s Hidden Revolution: How the Information Underground is Transforming a Closed Society. Baek has worked at Google, where, among other roles, she served as Google Ideas’ North Korea expert. Baek received her bachelor’s in Government and master’s degrees in Public  Policy from Harvard. Her hometown is Los Angeles, California. Visit her at www.jieunbaek.com. 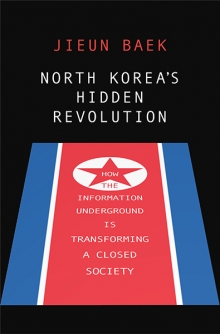