"Joan Baez and Bob Dylan," licensed for use on Wikimedia Commons.

The biggest misconception about Dylan, among the unbelievers, is that his cawing derision is somehow an impediment to appreciation. The second biggest (and this is among the believers) is that he is a poet before he is a lyricist and a performer, and that the latter two represent a demotion of the first. It seems reasonable to call Dylan a poet if he is placed next to his mentor Allen Ginsberg, but to place him next to the sublime John Ashbery, Elizabeth Bishop, James Merrill, or—why not?—Frank O’Hara, Robert Lowell, Wallace Stevens, or T.S. Eliot (despite, or maybe because of, Dylan’s reference in “Desolation Row” to Pound and Eliot “fighting in the captain’s tower”) is to commit an act of aesthetic anachronism that does Dylan and much of the Norton Anthology of Poetry a disservice.

Dylan’s influences seem to emanate from all over: Arthur Rimbaud here, Walt Whitman and Elvis there, Cisco, Sonny Bono, an’ Leadbelly too. Yet it’s hard to know where, precisely, to place him. Put him in the Great American Songbook with George and Ira Gershwin, Cole Porter, Irving Berlin, Harold Arlen, Duke Ellington and Billy Strayhorn, and the rest and the fit isn’t quite right, either; the flat-picked chords are too simple, not like changes to be played. Dylan staked out a cultural space that was well trodden, but in a combination unlike anyone else’s. As he put it in the spoken-word intro to “Bob Dylan’s Blues” (1963), “Unlike most of the songs nowadays that are being written uptown in Tin Pan Alley—That’s where most of the folk songs come from nowadays—This, this is a song, this wasn’t written up there. This was written somewhere down in the United States.” Dylan is delivering a zinger: the idea of “folk songs” written in Tin Pan Alley is ridiculous; folk songs are supposed to be rural, anonymous, and communal—a righteous public domain with no royalties. When Dylan cast himself as being “somewhere down in the United States,” he wasn’t talking about geography. “Some people, they tell me, I have the blood of the land in my voice,” Dylan would sing in 2009, a kind of Steinbeckian self-mythologizing with a wink and a nudge. But if Dylan was just another regular guy, he would have never written “Yonder stands your orphan with his gun” or any of the other gnomics with which he confronted his listeners in 1965. Whether those listeners were high or sober, his lines were unfathomable, yet at the same time seemed to make sense. Dylan belongs in the canon of singer-songwriters—a category he practically invented in the modern era of song. In the 1960s he was a new kind of hybrid, and it took his inimitable brand of articulation, more familiar to conversations than songs, to get it across. What could be annoying in conversation—adenoidal stream-of-consciousness vitriol—could be addictive when set to music.

Those Tin Pan Alley songwriters that he wasn’t quite of—Jews, outsiders, Negroes, homosexuals (not all of whom literally worked in Manhattan’s Flower District “Tin Pan Alley” offices but, lyrically and musically, occupied a Tin Pan Alley of the mind)—all strived for sophistication in a vernacular mode. When Dylan sang Gershwin’s “Soon” in a tux for a 1987 television special, it sounded as if Tom Joad had shown up at the Algonquin Round Table. Dylan came out of a much different tradition from that of those prewar urban tunesmiths, those who feasted on the Alan Lomax field recordings that brought black geniuses toiling in the Jim Crow South to the record players of middle-class towns like Hibbing, Minnesota. Dylan was shaped by the cult of authenticity that venerated some of his favorites—Muddy Waters (an inspiration for the title of “Like a Rolling Stone”), Odetta (who inspired young Dylan to pick up acoustic guitar), and above all Woody Guthrie, who inspired the prophetic lines of Dylan’s first major song: “Hey, Woody Guthrie, I wrote you a song.” “Hey” is not exactly a sophisticated form of address, but it is intimate and heartfelt. It echoed the sort of thing Guthrie himself wrote when he was addressing a land made for him and us. It is a form of address that has emerged out of the fields and into the corridors of power. Half a century later, “Hey” is more accepted than it was in 1961, especially in cyberspace, where it has all but replaced “Dear.” When it comes to something as malleable as sophistication, the center cannot hold.

While Dylan avoided sophistication in favor of authenticity, sophistication had a way of finding him. This is clear not only in what he would write by the time he made his Caruso claim, but by the heavy reading he was clearly doing in the incubation period recounted in Chronicles, Vol. 1. Joyce, Ovid, Proust, Keats—nothing major seemed to escape him. That derisive caw had elements of poetry and a schmear of the Great American Songbook. And so, while he is perhaps miscategorized as a poet, he is underrated as a singer. The two go together. Even though the unconverted thought Dylan’s brilliant lyrics needed sweeter voices to reach to the top of the singles charts (Peter, Paul, and Mary; Stevie Wonder; the Byrds), to get their full power you needed that caw. Without it, no Leonard Cohen, no Lou Reed, no Patti Smith, no punk rock, no grunge. The entire persona of Bruce Springsteen would have to be reinvented from scratch. Neil Young would be unthinkable. Lucinda Williams said, “I really decided to learn how to write great songs because of what I considered my vocal limitations. I decided I was going to be the female Bob Dylan.” Even Jimi Hendrix, who famously covered a few Dylan songs, said the man helped give him the confidence to sing. The vox mirabulus of 1965 forced listeners to confront what Ralph Waldo Emerson meant when he advised his readers to “go upright and vital and speak the rude truth in all ways.” Leonard Cohen, upon first hearing Bringing It All Back Home and Highway 61 Revisited, declared that he would become the new Bob Dylan, when he already had three books of poetry, a novel, and a national bad boy reputation under his belt but had never sung a note in public. Perhaps the talking blues of “Subterranean Homesick Blues” even prepared the world for guttural hip-hop. Dylan didn’t invent all the things he was doing, but he consolidated, assimilated, and with that relentless voice became one of the most influential forces in American Song.

Dylan’s wholly distinctive, original voice—a “thin, wild mercury sound,” to use a phrase of his coinage—emerged from the ashes of his career as a political pamphleteerer. The shift in diction came after he scandalized the National Emergency Civil Liberties Committee by accepting an award and drunkenly saying, just weeks after the assassination of John F. Kennedy, that he identified with Lee Harvey Oswald. The event was a catalyst for Dylan to abandon his “finger-pointin’” songs (until the 1970s, when the stories of George Jackson and Hurricane Carter pulled him back in) to look inward. In one of the innocuous statements he made early in this near-career-sinking speech—Dylan’s equivalent of Malcolm X’s “chickens coming home to roost” comment—he tried to age backward: “I want to thank you for the Tom Paine award on behalf of everybody that went down to Cuba. First of all because they’re all young and it’s took me a long time to get young and now I consider myself young. And I’m proud of it. I’m proud that I’m young.” Before the moment that became the most memorable part of the speech, he went on, in the face of the geriatric crowd, to praise “everything leading to youngness.” This was a decade before he would intone “And may you stay forever young” but shortly before he recorded “I was so much older then, I’m younger than that now.” Those Dust Bowl ballads he was writing to perfection were prized for authenticity, a quality that, in his milieu, was more important than Tin Pan Alley sophistication. (Even though performing in Oakieface was no less a mask than, say, Ella Fitzgerald or Billie Holiday singing Cole Porter to perfection, drenched in Porter’s New Haven–honed wit.) But Dylan becoming young was another kind of authenticity: he was only twenty-two years old. Getting young meant, for Dylan at the close of 1963, getting real.

And by the time 1964 was under way, Dylan, out of the Dust Bowl and into the city, found an entirely new disguise: himself, or at least another side. At a concert on October 31, 1964, at Lincoln Center’s recently opened Philharmonic Hall (later renamed Avery Fisher), Dylan, no longer dropping his g’s, commented on his ever-changing personae: “It’s just Halloween. I’ve got my Bob Dylan mask on [applause, laughter] . . . I’m masquerading.” That was the year that Dylan gave the Beatles their first taste of marijuana, when his romance with Joan Baez peaked out but only Dylan realized it, and also a year of two albums, one The Times They Are a-Changin’ (February), featuring an identity already bypassed with the most thrilling collection of “finger pointin’” songs he would ever produce, and Another Side of Bob Dylan (May), less earnest, more playful, and almost completely apolitical (save a reference to “equality in school” in “My Back Pages,” and “Chimes of Freedom,” droned in a nearly anesthetized haze), a demonstration that he was not merely presenting another side but had shape-shifted, in just a few months, into something almost entirely different. Sex, drugs, and irony replaced politics and earnestness. It was a trade-off that, for a young pop star with taboos to tweak, was pretty hard to resist.

Dylan’s transformation from political sloganeer (or “protest singer,” a term he would come to loathe) to surreal, fragmented, Beat-influenced songwriter has generated rivers of ink. What is less remarked on is how this shift (on record, in a matter of months) changed his singing. Even though Dylan made a defiant move against the topical, in many ways his phrasing, his attack, his pronunciation, his speak-song changed what it could mean to be a popular singer, especially one with literary ambitions, and it changed the way one sang (or spoke) American without tears. Between 1964 and 1966, as Dylan’s voice went from Guthrieite to big-city shouter to drugged-out gnomic adenoidal seer, the whole world, as he sang, was watchin’, or listenin’. The voice would continue to evolve in subsequent years, but its metamorphosis (much to Dylan’s relief ) would no longer be a barometer of cultural change. Freaks would still dig through his garbage and regard him as a reluctant prophet. He would still claw his way in for comeback after comeback, no matter how much he wanted to be left alone. And he performed far more concerts in the first decade of the twenty-first century than he did during the 1960s

From Bob Dylan: Like A Complete Unknown by David Yaffe. Reproduced by permission.

David Yaffe is assistant professor of English at Syracuse University and the author of Fascinating Rhythm: Reading Jazz in American Writing. He is a music critic for the Nation and has written articles for the Cambridge Companion to Bob Dylan, the New York Times, Bookforum, New York Magazine, Slate, The New Republic, The Village Voice, and other publications. 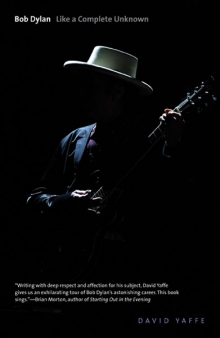