What would you do if you came across a video featuring your naked body on Facebook?

On March 7th this year, Fox Sports reporter Erin Andrews won a claim for “invasion of privacy” against both a stalker and the Nashville Marriott hotel after the stalker, Michael David Barrett, secretly videotaped her naked in her hotel room and uploaded the footage online, where it went viral. According to the complaint, Andrews suffered severe and permanent emotional distress as a result of the incident, and she was awarded $55 million in damages by a Tennessee jury. In a statement posted to Twitter, she thanked the court, the jury, her family, friends, and the legal team for their support. Had she known more about the brave women who first forged a right to privacy in the United States over a hundred years ago by bringing individual actions to control the use of their images, she might have thanked them, too. But sadly, their pioneering activism is hardly remembered.

Historically, women led the way in establishing and exercising a legal “right of privacy.” With the transformation of photography into a popular pastime in the 1880s, enabled by New York entrepreneur George Eastman of the Eastman Kodak company, women in the United States were increasingly confronted with the unauthorized capture and circulation of their images. Their pictures became a source of men’s voyeuristic pleasure and were used for profit in advertisements, magazines, and greeting cards. Ladies Home Journal warned its readers as early as 1890 that “while the great majority of professional photographers are men of honor and responsibility…women should always know the standing of the man to whom they entrust their negatives…The negative once in his possession (if he is so disposed), he has the means of causing them great mortification by using it for base purposes.”

Debates about how to prevent and prohibit the unauthorized use of women’s pictures preoccupied journalists, politicians, and the legal fraternity. The New York Times called amateur photographers “young knights of the camera” and characterized “pretty girls” as their “natural prey,” discussing the issue in terms of conflicting “rights.” “It is a question of debate what rights the amateur has in securing pictures,” one staffer wrote, “and of course there are some who consider a party of young women as free subjects of photography as a waterfall or clump of trees.” Republican Congressman John Robert Thomas was moved to introduce a bill to Congress proposing a prohibition on the likenesses of the “wives, daughters, mothers and sisters of American citizens” being used for advertising purposes without their consent. “The Bill to Protect Ladies” attracted concerted opposition from professional photographers and never passed the House. Two years later, Samuel Warren and Louis Brandeis advocated for a new legal “right to privacy” in the Harvard Law Review. To support their argument, they cited the case of Marion Manola, a young Broadway star whose image was surreptitiously snapped while performing on stage in tights. Manola protested against becoming a commercial sexual object—from becoming, in her own words “common property, circulated from hand to hand, and treasured by every fellow who can raise the price demanded.”

When another feisty young woman from New York, Abigail Roberson, found her image plastered on packets of flour, she took the flour company and advertiser to court. Her suffragist championing attorney, Milton E. Gibbs, argued that the company had violated both her right to privacy and her property right to her own beautiful face. Roberson lost the case, but community outrage was so great that the New York legislature enacted a statutory case of action for “a right to privacy”—the first in the common law world. Other states soon followed in recognizing privacy rights, either via common law or legislation, and numerous cases contesting the use and abuse of people’s images (both photographic and cinematic) emerged in the first decades of the twentieth century.

The majority of these cases were brought by incensed women. Abigail Roberson was followed by Coney Island high diver Mabel Coyler, private detective Grace Humiston, bread hawker Miriam Blumenthal, Kansas housewife Stella Kunz, Broadway star Gladys Loftus, African-American dancer Pauline Myers, Californian society matron Gabrielle Melvin, and many others. They and their attorneys brought actions to protest the use and abuse of their images in advertisements, magazines, newsreels, documentaries, newspapers, and feature films. In doing so, they shaped privacy rights in the United States.

As the Erin Andrews case this year shows, these rights have since proved useful in combating the rise of “nonconsensual pornography”—where women’s naked bodies or otherwise explicit images are shared online without their consent. Last year, Florida mother Lastonia Leviston successively sued the rapper 50 Cent (Curtis James Jackson III) for invading her right to privacy when he acquired and uploaded a sexually explicit video of her. She relied upon sections 50 and 51 of the New York Civil Rights Laws, the statute created in the wake of Abigail Roberson’s pioneering case.

However, while privacy laws are useful, they are also proving inadequate in the face of recent technological change, particularly the growing popularity of smartphones and social media. Civil actions based on rights to privacy require substantial resources to initiate, often involve the victim submitting to greater publicity and scrutiny, result in damages that are difficult to recover from penniless and/or hostile defendants, and offer little, if no, deterrent effect on future perpetrators. Meanwhile, images of women’s naked bodies continue to spread like an infection across the Internet.

Jessica Lake is a lecturer in law at Swinburne University of Technology in Australia and from August 2016 will be the Karl Lowenstein Fellow in Political Science and Jurisprudence at Amherst College, Massachusetts. 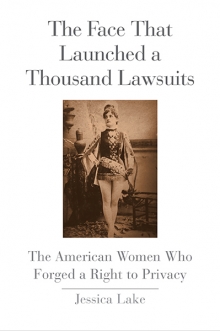