At a secret location somewhere in the White Mountains of California is the world’s oldest individual tree. This ancient Great Basin bristlecone pine (pinus longaeva) has been growing there for more than 5,000 years, at least two centuries longer than its nearest rival, which is a mere 4,850, though it’s this relative youngster that has been given the name “Methuselah.” These trees are nowhere near as tall as the native Redwoods or Douglas Firs, but their squat, twisted bare trunks and tufty outbreaks of dark foliage have a beauty all of their own. These ancient, craggy, arboreal patriarchs would have been much the same when Christopher Columbus “discovered” America in 1492.

Further north is the “Land of the Silver Birch,” a tree which often flourishes where the soil is poor and the temperatures low. For the indigenous people of Canada and the Northern United States, the easy-peel bark of birch trees provided materials for bags, boxes, boats and wigwams. Birch was decorative as well as practical, because intricate patterns could be created by biting gently into the brilliant white bark. The thin skinned bark of the white betula papifyrus resembles paper, hence its common name—Paper Birch. But it’s also known as the Canoe Birch, because it was so well suited to making lightweight, watertight canoes—or “birches.”

Many kinds of trees have lent themselves to boat-building. Today steel, aluminum and fiberglass are all standard options for the construction of yachts, depending on the size of the vessel, but there’s still great demand for wood. Hulls are constructed from oak timber, masts from pine, rowan, or birch; while the resin and varnish required for waterproofing derives from pine trees. British sailors were once known as “Jack Tars” because of the sticky substance used for making every part of their ships sea-worthy; the tar was produced by heating the gooey resin tapped from the trunks of pine trees. Oak trees were needed for warships—H.M.S. Victory, the great flagship of the British fleet at the Battle of Trafalgar was built from some 2,000 mature oaks.

Trees have played just as crucial a role in the army as the navy. We are only too familiar with the grainy footage of trench warfare, with those dreadful networks of deep, dug-out ditches, tunnels, subterranean stores and cabins, constructed from planks and pit props, but what about the camouflaged uniforms? Khaki was first used by British troops in nineteenth-century India, using fabrics colored by a dye derived from the Mazari palm tree, which was later replaced by soaking the cloth in mulberry juice. The artificial limbs of the injured veterans were fashioned from blocks of willow—among the lightest of woods and therefore more manageable for the amputees. War artists such as Paul Nash often expressed the carnage of the battlefield not through graphic portraits of mutilated soldiers, but through the jagged silhouettes of trees, cut off and crownless. The blackened stumps of devastated orchards were eloquent in their silence. In Turkey, the Battle of the Lone Pine is still marked by a single pine tree, which was planted in the 1920s in memory of the tree destroyed in the battle. Seeds of the original Lone Pine were saved and taken across the world for planting in Australia and New Zealand as living memorials to the ANZAC soldiers who fell in the Dardanelles conflict.

Trees are rooted to the spot, but their seeds are often surprisingly mobile. The propeller-shaped samara seedcases of sycamores can travel considerable distances, which is why this species spreads so rapidly. In 1971, some sycamore seeds went very much further than normal, when the astronaut Stuart Roosa took a collection with him into outer space on the Apollo 14 mission. In the intervening decades, “Moon Sycamores” have been raised and planted across the USA. Cherry pips have also gone into orbit, an experience that seems to have had quite an effect on their normal habits: the cherry trees raised from seeds taken to the International Space Station began producing buds much quicker than earth bound saplings. There’s still something to be said, though, for waiting patiently as those impossibly frail-looking seedlings slowly put on height and girth, sprouting a few more leaves and twigs each season until the first blossom bursts into life. Probably the most surprising thing about trees is their capacity to astonish us year after year, as the buds open and the world shakes itself into green life once again.

Fiona Stafford is professor of English language and literature, University of Oxford. She is author and presenter of two highly acclaimed series for BBC Radio 3 titled The Meaning of Trees. She lives in Bucks, UK. 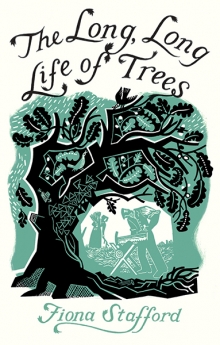