When Vera Rubin was first invited to use the telescope at the Palomar Observatory, in the mountains outside San Diego, the form she was asked to fill out included the following notice: “Due to limited Facilities, it is not possible to accept application from women.” In pencil, someone had added the word “usually”.

It was 1965. The limited facilities consisted of a single bathroom, which someone had taken the care to label “Men.” Rather than let women use the men’s room, the observatory simply banned women altogether. Fortunately, Rubin saw her way to a solution: when she arrived at the observatory that December, she found some paper and scissors and cut out a figure wearing a skirt, which she taped to the bathroom door. Problem solved.

Today, Rubin is best known for establishing the existence of a mysterious substance known as dark matter. Dark matter is a new kind of material, with properties like mass and energy much like the ordinary matter composing tables, planets, and stars. But unlike ordinary matter, dark matter is invisible to us. This is because it does not seem to emit, absorb, or otherwise interact with light or other electromagnetic radiation, such as x-rays. It is literally dark. Most of the matter in the universe is dark matter: there is about five times as much of it as visible matter.

How do you discover something in space that cannot be seen, by any telescope ever constructed? For Vera Rubin, it was by looking where no one else had bothered.

Overt sexism wasn’t the only thing standing between Rubin and research time at big, West Coast telescopes. She also had a husband and four young children living outside of Washington, D.C. As her family grew, it became less and less feasible for Rubin to race around the world, competing with other astronomers to study the dimmest, most distant galaxies using the biggest and newest telescopes.

So Rubin sought out problems that she could work on at her own pace. While others strained to see ever-more-distant galaxies, Rubin turned to the Andromeda galaxy, the closest large galaxy to the Milky Way. And where many astronomers were struggling to see into the center of galaxies, to better understand the enormous black holes lurking there, Rubin took the other extreme: she sought to study the motions of stars in the outer reaches of a galaxy.

The outer reaches of galaxies weren’t widely studied, and for good reason. No one expected to find anything surprising or novel there. A galaxy is a bit like the solar system, albeit scaled up a few million times. Near the center of a galaxy is a lot of stuff: usually a large black hole and densely-packed stars. As one moves away from the center, the density of stars and gas tends to drop off. Thus, for a given star in the outer reaches of a galaxy, the main force acting on that star is the gravity of the center of the galaxy. This means that stars in the outer reaches of a galaxy should orbit the center of the galaxy in just the same way that the planets in our solar system orbit the sun. Studying such stars looked like a problem in high school physics, hardly the sort of thing that could lead to fundamental new discoveries.

Of course, the fact that everyone expected the outer edges of a galaxy to behave in this way did not mean that anyone had checked that they do so. This is what Rubin and her collaborator Ken Ford set out to do, in 1968.

On Rubin’s very first night of data gathering, over the course of four or five ice cream cones in the high desert of Arizona, something unexpected appeared in the data.

The orbits of the planets in our own solar system exhibit a distinctive pattern. The farther a planet is from the sun, the slower it moves. Staying in a stable, nearly circular orbit is a delicate business. Move too fast, and you will fly out of orbit; move too slowly, and you will plummet towards the sun. The speeds compatible with a stable orbit depend on a planet’s distance from the sun, such that the more distant a planet is, the slower it must move to stay in orbit. The situation with stars in the outer reaches of the galaxy should have been the same.

But this isn’t what Rubin saw that night in Arizona. Instead, it seemed that after a certain distance, all the stars in the galaxy moved with approximately the same speed, no matter how far they were from the center of the galaxy.

There could only be one explanation for this strange behavior. The velocities of stable orbits depend on two factors: the distance from the center of the system, and the mass of whatever is holding the body in orbit. If the velocities did not depend on distance as expected, the galaxy’s mass must have been very different from how it appeared. For one, a galaxy must contain much, much more mass than believed. More, that mass must be arranged differently than it appeared. Instead of being densely packed at the center of the galaxy, it must be distributed throughout the whole galaxy, extending far beyond even the outermost stars.

In other words, the overwhelming majority of the mass in a galaxy was invisible to us. This idea—that there is matter in the universe that we cannot see—had been proposed before. A Swiss physicist named Fritz Zwicky had even coined the term “dark matter” to describe it in 1933. But this was a fringe idea, based on calculations concerning distant galaxies. Most astrophysicists thought it was wildly implausible, until Rubin and Ford presented their startling new evidence.

But if any of this is right, then there should be dark matter all around us. And yet, despite forty years of searching, we still have not been able to detect any dark matter directly. We don’t even have an accepted theory of what dark matter consists of. All we know is that it’s dark—and that there’s a whole lot of it.

James Owen Weatherall is Professor of Logic and Philosophy of Science at the University of California, Irvine.  He is the author of Void: The Strange Physics of Nothing and The Physics of Wall Street.  His website can be found at http://www.jamesowenweatherall.com. 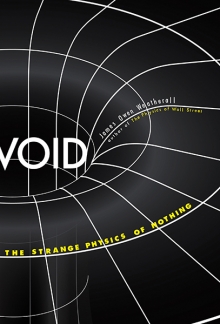