I first became fascinated with the social and cultural dimensions of everyday bribery in the Soviet Union when I was robbed in Moscow in 1992, just after the collapse of the USSR.  My wallet was swiped by a group of kids while I was walking in central Moscow. When I went to the local police station to report the crime, the captain in charge welcomed me with tea and cookies in his office. After some friendly chitchat, the officer casually let me know that I would have to pay bribes to move the case forward. I declined, but his proposition shocked me, not least of all because he solicited the payments so openly.

In today’s Russia bribery is out in the open, like a free market where prices are well known. In Soviet times, however, those people who chose to trade in this kind of petty bribery still took major risks. Especially in the Stalin years, the danger associated with giving or accepting bribes was great. Aware of the risk, Soviet people made their deals in the shadows. My research has focused on the late Stalin years, between the end of World War II and the dictator’s death in 1953. Ultimately, a paradox lies at the heart of my work—the existence of a dynamic culture of private deal making among officials and ordinary Soviet people at the very height of the Stalin dictatorship.

Varieties of bribery can be found in every system, authoritarian and democratic, capitalist and socialist. But what were some of the particular contours of everyday bribery in the postwar Soviet Union? In the wake of war, the country was devastated. At least 25 million had died, and vast numbers were seriously wounded. A great deal of infrastructure, including farms, factories, and housing stock, was destroyed. In 1946 and 1947, famine ravaged the grain producing regions of the country. Within the one-party system, of course, there was no free press, independent judiciary, or opposition parties to report abuses.

Moreover, the post-war criminal justice system oversaw the arrest and prosecution of more than two million people for small-scale economic and property crimes, bringing them into contact with the legal system. These arrests were not primarily for the “counter-revolutionary crimes” and invented charges of treason that marked the purges and mass repressions of the 1930s. After World War II, people were most often prosecuted for petty crimes, such as the “theft of socialist property” (under a special June 1947 decree) and profiteering in scarce goods (known as “speculation”). The typical “thief” was an industrial worker who pilfered some lumber or bricks from a worksite, or who took finished products from a factory or store to barter. Amid famine, hungry peasants absconded with food from the fields of the collective farms; prosecutors often charged them with theft of the “people’s property.” Nearly all were given mandatory minimum sentences of at least seven years in the Gulag.

In these extreme times, repression begat corruption, as some people took the dangerous step of offering bribes in order to escape—or at least to soften—intractable legal problems. In exchange for reduced penalties, judges and prosecutors would sometimes accept under-the-table “gifts” in violation of the law.

According to official narrative after the war, bribery was all but extinct. Yet the archives of the courts and police reveal that in these desperate times, the opportunities and incentives for soliciting bribes were myriad. Many people were willing to take great risks. They negotiated illegal deals to recover their apartments, which had often been taken over by government agencies or by squatters during wartime evacuations; to recover critical documents such as internal passports and work papers that had been lost or destroyed during the war; or to try to get family members released from custody.

Unlike the post-1953 period when such transactions nearly always involved cash, after the war most bribes were paid in kind. According to Soviet law, bribes could take the form of any item of value. In rural areas, people offered food, fabric, or bottles of alcohol. In the cities, the most common illicit gifts included jewelry, clothing, rugs, and apartment repairs or other services.

Indeed, my work analyzes bribery not simply as a crime or a moral transgression, though these are important elements of my research. I suggest that we also think of bribery as akin to a nuanced art form, a social practice with many creative dimensions. Stalin-era life provided prolific opportunities for money, gifts, and awards to change hands legally, for example. It was but a small step secretly to incorporate an illegal offering into these exchanges. Many transactions could conceal a bribe—pretending to lose at cards to an official, buying something from one’s boss for a high price, awarding an undeserving employee a prize. Suspicious legal authorities had a term for such covert deals that were not an obvious trade of cash for favors: the “masked bribe.” The petitioner who gave an imported prosthetic leg to a judge who had lost his leg at the front in exchange for a lenient sentence is just one example of a particularly inventive offering.

Most often, people disguised transactions with officials in traditional cultures of gift giving. If caught, they could defend themselves by claiming that they had merely given (or accepted) a traditional “token of appreciation” for a job well done. Of course, the boundaries between a gift, a bribe, a tip, and a favor were frequently blurry and porous. These lines were confusing for officials, for ordinary people, and for the prosecutors responsible for determining whether these actions were crimes.

At the same time, many Soviet people mastered the critical skill of discerning who was likely to accept an illegal gift, and who was not. During an interrogation in 1946, for example, a man being questioned offered an Odessa regional investigator a cherry. The investigator accepted the piece of fruit. The accused said that he instantly intuited that the investigator would also accept a bribe. He and his wife later offered the investigator 12 kilograms of cherries and 3,000 rubles in cash. The deal to drop the charges was sealed.
The idea that bribery can be a creative act is an important framework for my work. In postwar conditions, desperation bred resourcefulness. Amid harsh repressions, ordinary people and officials made informal deals of all kinds. Soviet people who risked entering deals with officials were not merely cowed and passive victims; they took an active part in attempting to shape their fates.

James Heinzen is professor of history at Rowan University in New Jersey, where he teaches Russian and European history. The author of Inventing a Soviet Countryside: State Power and the Transformation of Rural Russia, 1917–1929, Heinzen lives in Strafford, PA. 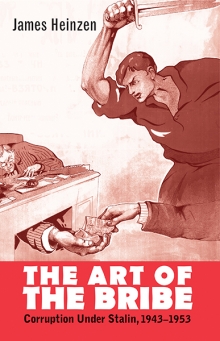